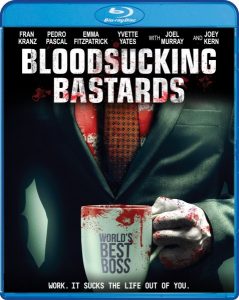 Bloodsucking Bastards has a fun twist on both the vampire movie and the office comedy. What if the A-hole new bosses were actually deadly creatures?

The characters’ absurd reaction to violence is refreshing too, especially when Fran Kranz reacts to a kill in a bathroom stall. The film’s take on staking a vampire offers something we haven’t seen before too.

The film looks great on Blu-ray. Even the drab office setting shines in HD. It is a low budget movie shot in an office, but it looks clear and sharp, also highlighting the wonderful detail in all the gore.