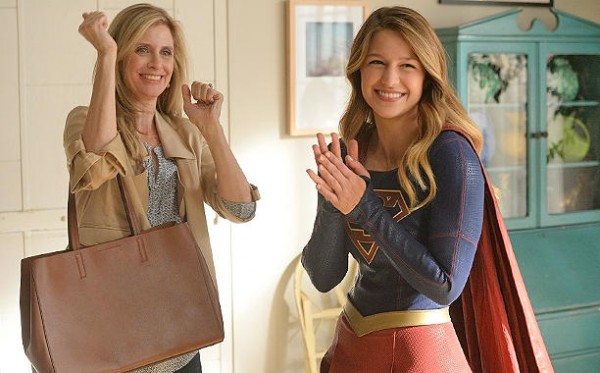 Because of the Paris Tragedy, they pulled the episode that was originally scheduled. This is the Thanksgiving episode, and we get it a week early. The only thing we apparently missed, from the skipped episode, was the intro of James Olsen’s ex-girlfriend, Lucy Lane. And in this episode, Lucy and James appear to be dating again. In fact they go off to Ojai, California together on a little vacation. Ojai is known to long-time fans as the home of Jaime Sommers, the Bionic Woman, a female superhero in the late 70’s. Is it a coincidence, or a little shout-out to another blonde powerhouse?

In tonight’s episode, “Livewire,” we see the birth of a super villain. Leslie Willis is a radio shock jock that works for a branch of Cat Grant’s company. But when she goes on a ‘Mean Girl’ rant against Supergirl, Cat calls her out, and tries to censor her. But Leslie isn’t having it. So Cat flexes her corporate muscles and demotes her, making her a high-flying traffic reporter. In a snit, Leslie takes her helicopter out in a storm, and surprise, Supergirl has to rescue her. But during the rescue, lightening strikes Supergirl and flows through her and strikes Leslie as well, changing her forever. Leslie 2.0 is now a white-haired hellion named Livewire, capable of transforming into pure energy. And she’s out for revenge.

Meanwhile, it’s Thanksgiving and Kara’s Step-mom comes to town to visit her girls. Kara is thrilled, but Alex is apprehensive, because she feels that her mother is always coming down on her. This makes for an awkward Thanksgiving dinner for Winn, who joined the ladies for the holiday, and then found himself in the midst of family drama. He leaves without eating. Happy Thanksgiving! Winn’s family doesn’t do holidays because his father is in prison. And Winn describes him as a very bad man. I’m thinking he’s The Toymaker, a villain from the comics. And I also predict we’ll be seeing him sooner than later.

Oh yeah! Kara also cooks a turkey with her heat vision. How can I forget that? The same kind of thing happened in SUPERMAN II, when Superman cooks a soufflé for Lois in the Fortress of Solitude. Is there a heat-vision cookbook somewhere out there that I don’t know about?

Helen Slater plays Supergirl’s Step-mom, and in 1984 she was ‘Supergirl’, in a movie of the same name. Dean Cain plays Supergirl’s Step-dad, and he played Clark Kent/Superman in the 90’s series ‘Lois and Clark’. A great pedigree, if I do say so myself. We see Dean in Flashbacks, where we learn that Kara did use her powers irresponsibly as a girl, and her Step-dad paid the price. Young Kara and Alex sneak out and go flying. A young Hank Henshaw at the D.E.O. spots them, and Dean Cain has to make a Secret deal with the Devil to keep young Kara from becoming the next Alien Autopsy.

But Mom tells the secret. And though both Kara and Alex work with the D.E.O., neither knew that Hank had a hand in their earthly Dad’s mysterious death. And now that that they know, they intend to find out the truth, no matter where that leads. Remember, we’ve seen Hank’s eyes glow an inhuman red, which means he could be an alien himself. Did someone say Martian Manhunter? That’s just a guess, but it’s as good as any.

Livewire goes after Cat Grant! But luckily Supergirl is there to save her. The two super beings go toe-to-toe for a few rounds, but neither have the upper hand. So Livewire merges with the electrical system and tries to crash the elevator that Cat is escaping in. Supergirl saves her. And they decide to team up. Kara also cooks a turkey with her heat vision. How can I forget that?

Oblivious to the fact that Supergirl is Kara, with her hair down and glasses off, Cat actually has a sympathetic moment with Kara. Feeling vulnerable, she reveals that her own mother was always hard on her, which is why she’s such a success today. That’s why Cat is so hard on the people she cares about. This helps Kara understand why her Step-mom is so hard on Alex. She also has that tough-love mentality. But don’t worry, Alex and her Mom finally communicate, and end up hugging it out.

Supergirl and Cat bait Livewire, getting her to come out for the final battle. Livewire is stronger now, possibly strong enough to kill Supergirl. But, like the Wicked Witch of the West, all it takes is a little water to short-circuit her abilities and take her down. Now it seems like Supergirl and Cat are becoming friends, and Kara and Cat may become friends too. So how’s that going to work without Cat realizing that Kara and Supergirl are the same person? Stay tuned!