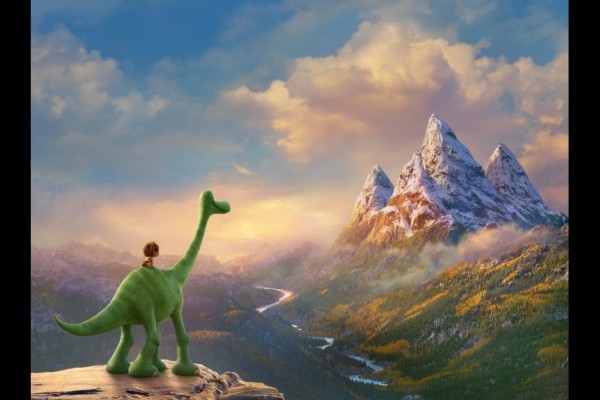 In 2000 Disney released a revolutionary animated movie called Dinosaur. It was filmed using live action backdrops with animation of photoreal dinosaurs, who spoke English but otherwise looked like living, breathing Jurassic Park creatures in the prehistoric era. 15 years later, the only thing I remember about Dinosaur is that nobody remembers Dinosaur, but it was revolutionary at the time. 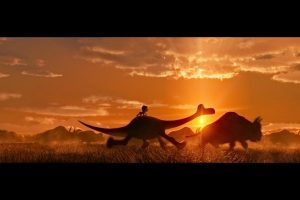 Pixar’s The Good Dinosaur will probably fare better than that, and it does take technology forward in one way. While they opted for more cartoonish looking dinosaurs, the backdrops still look completely photoreal. Only this time, they didn’t shoot live action backgrounds. They actually animated backgrounds that look like live-action nature photography.

The story, while pleasant, is not quite as memorable. It fits the Disney model of “an outcast leaves his home and finds his surrogate family so he can return to lead his tribe/pack/pride/etc.” He’s got a dead parent in true Disney fashion too. This time it’s Arlo (Raymond Ochoa), who’s just a little smaller and more timid than his brother and sister. After a storm that claims his father (Jeffrey Wright), Arlo hooks up with a caveman baby, Spot (Jack Bright), on his way back home. 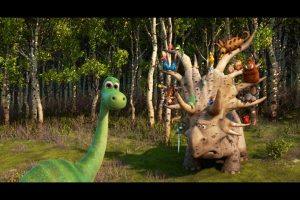 Arlo and Spot come across a series of wacky, kooky prehistoric characters that all provide amusing episodes, but don’t add up to much. It’s like if Marlin visited sharks and turtles who didn’t teach him anything about being a parent before he found Nemo. There are some funny, scary and poignant characters on the prehistoric road, but none with the permanence of a Timon and Pumba, not even Spot. There is a lot of silent, visual comedy which is the heart of animation. Arlo and Spot communicate without language, which only further extolls the virtue of a visual script that doesn’t require a lot of exposition. However, it misses an opportunity to evolve characters visually. 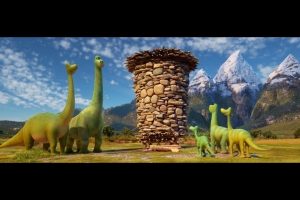 It gets off to a confusing start even before Arlo leaves. Poppa lets every kid make their mark (leave their footprint) on the family storage silo. The criteria for making your mark is your have to do something big for something bigger than yourself. That is a fine moral for the film, but then plowing the field is big enough to earn one dino sibling their mark. And if only Arlo had been able to collect the chicken eggs without getting scared that would’ve been enough for him too. Basic chores aren’t something big for something bigger than yourself. Maybe slightly bigger than yourself, since it’s the whole family’s crop, but even when he has to take care of Spot, I never felt Arlo really grew from his journey. But, at least his mom didn’t turn into a bear. 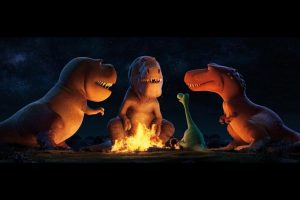 You begin to realize The Good Dinosaur is a western, right down to the casting of Sam Elliott’s voice and a campfire scene, but I’m not sure why. The new frontier doesn’t suggest the geological change eventually coming to the earth or even a lawlessness relating to nature’s law. It’s just a place Arlo visits.

The Good Dinosaur is perfectly pleasant to watch with your kids, or by yourself because no one’s judging here. There are some genuinely amusing jokes and beautiful imagery, but perhaps the film is purely a superficial treat. That’s not only holding it to the standards of other profound Pixar movies, but any movie that you hope to watch over and over again, as you’ll surely have to regardless of any reviews.