It is the 20th anniversary of the film that made Will Smith a movie star and Michael Bay a feature film director. On that occasion, a new Blu-ray has been released remastered from a 4K transfer. It also comes with the sequel, which you would think would make Franchise Fred happy, but more on that later. 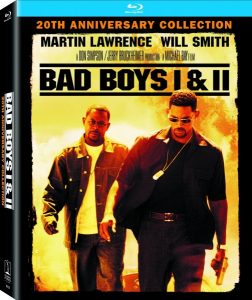 Revisiting Bad Boys, it’s interesting how much it reflects what Bay’s style would ultimately become. The action still lacks geography, but it’s so intimate that you can still follow it. He had to settle for the wanton destruction he could afford, so it’s only one cyclist getting his bike run over as he runs from an oncoming car, although the wheelchair basketball team suggests the indiscriminate nature of Bayhem to come. Also fun to note that in 1995, Tea Leoni was the Michael Bay type, and her shiny legs still look hot as we’re encouraged to objectify her.

The new Blu-ray maintains the look of a movie shot on film in 1995. You see the grain, and the beginnings of the orange sun color palette, though not quite full Armageddon. Sweat glistens from all the low angle shots of Smith and Martin Lawrence, who would both benefit from the film, but Smith especially being taken seriously as an action star.

I have not revisited Bad Boys II since 2003. I meant to, since Hot Fuzz contextualized it as something to be admired, but now that I’m finally seeing it again, Hot Fuzz doesn’t help. Bad Boys II is as vile as I remember it.

At this stage Bay had amazing ability to capture incredible stunts but put them together in the least engaging way possible. Vehicular stunts, where the cars aren’t CGI, are impressive but cut together like random incidents. Smith and Lawrence exchanging machine gun fire with bad boys and it’s just a lifeless cacophony. He spins a camera between two rooms, using the wall as a seamless blending tool, but all we’re seeing is flying debris.

I’d forgotten that there was a car chase where a morgue van drops cadavers, a gag ripped off from the 1994 movie The Chase. I’m sure Bay never saw it, but great minds think alike about nine years later. Jokes about dead woman’s big implants are just repulsively distasteful.

Bad Boys II just forgets who the characters are. Smith’s Mike Lowry now has a trigger happy bloodlust and wants to kill everybody, even calling himself the devil at one point. I can’t imagine Smith is happy with this, given his recent comments about turning down Django Unchained because it was a violent revenge tale. Lowry and Lawrence’s Marcus Burnett are aggressive with each other, not playful.

For the first time on Blu-ray, Bad Boys II looks like a modern era Michael Bay movie. It’s still got the film grain, which Bay championed kicking and screaming until he was forced to make a digital 3D movie. It sweats like the Miami heat, but hard to see much detail through all the saturation.

Hopefully Bad Boys 3 and 4 will return to the magic of the simple buddy cop movie. Maybe they can even retroactively make Bad Boys II good like the Fast and the Furious sequels did. I know II has its fans so they’ll be happy with the transfer, and the original holds up 20 years later.