I got to know Isaac Florentine two years ago when Ninja: Shadow of a Tear premiered at Fantastic Fest. I had been following his work with martial artist Scott Adkins in Ninja, Undisputed II and Undisputed III: Redemption, so I was excited to see another sequel and learn more about his career, getting into the business by directing episodes of Power Rangers and the film Desert Kickboxer for Menahem Golan, of Cannon Films fame. 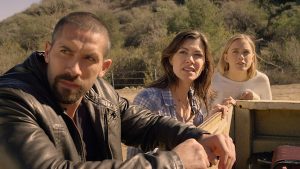 This week there’s a new Florentine/Adkins film out. Close Range stars Adkins as soldier Colton MacReady, who rescues his niece from kidnappers but ends up with a flash drive full of valuable assets. When the criminal gang follow him to his sister’s ranch, MacReady has to fight them off and save his family. I got to speak with Florentine again by phone about his new film, and the upcoming Boyka: Undisputed IV. Close Range is available on VOD December 4, and Blu-ray and DVD January 5.

Nerd Report: How did Close Range come about? Were you looking for something else to develop with Scott or was it just an offer?

Isaac Florentine: Two of the above. I had a script that was not right for Nu Image. I went to the producer, Ehud Bleiberg, from Bleiberg Entertainment. I was told he was interested. It was a little bit of an, I don’t know, politically charged script so that’s why it was not right for Millennium. And he also wasn’t crazy about it and told me, “Look, this script, I’m not sure if I want to do it, if it’s stuck or not stuck.” And he sent me Close Range. I read it and the way he described it, it was like some kind of Straw Dogs. When I read it, it didn’t feel like Straw Dogs but I kind of sensed with a polish it could become like a contemporary spaghetti western. This is how it came about.

Nerd Report: I definitely sensed the spaghetti western. Was the music inspired by Morricone? 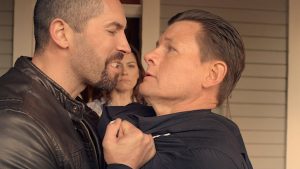 Isaac Florentine: Yes, Stephen Edwards has done so many movies and I like his work. He basically scored the movie. There is also some by Jake La Botz. I know Jake for many years. He’s an American guitar player and he also plays the husband in the movie. We used his music for the end title music.

Nerd Report: Was it an ideal scenario for a movie, in a contained out of the way location but with plenty of room for action?

Isaac Florentine: It was mainly like that and we would simplify it or modify it so that it would be simpler to shoot.

Nerd Report: But you use every room in the house and every rock in the mountain to your advantage. Was that from the location or was it already in the script? 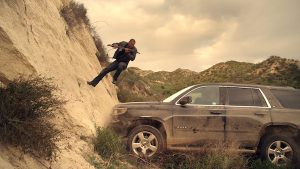 Isaac Florentine: It wasn’t all the script but the trick was to find the right location that would be right for the script, because there was no set really on this one. It was really all shot on location. Really the trick was to find the right range. I was insistent to find something that I can shoot from the interior into the exterior and vice versa, and that the geography would be explained and be very clear.

Nerd Report: There are so many villains for Scott to take out, was it important to introduce each of them early?

Isaac Florentine: Yes, because what happened is there are not so many baddies, and he doesn’t kill them so fast. In the big shootout, everybody’s kind of safe. Everybody takes cover. Slowly and slowly, he starts to take them out.

Nerd Report: How many takes did you do of the opening fight that’s all one shot? 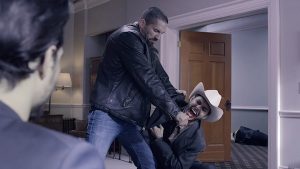 This fight happens all in one take.

Isaac Florentine: [Laughs] I did about eight takes. I looked at locations and this movie was shot in L.A. after I haven’t shot a movie in L.A. for many, many years. It somehow got stuck in my mind that I wanted to do the opening in one shot, the fight, from the elevator, into the corridor, into the room. I was looking and looking and looking, and then I found that location. The producer, Ehud, told me, “Isaac, this is more like a hotel corridor, not really a courthouse.” I told him, “You know something, you’re right, but I want to do it in one shot.” Therefore I wanted something that really feels like from the elevator, into the corridor and then the big room. There’s another trick I’ve done before in a movie that him walking from the entrance hall into the elevator, the elevator was really on location, the doors didn’t open. So if you look, there is some kind of a shot, he beats one guy up and then goes to the door. Basically that door that opens that looks like it was in the entrance was also shot upstairs.

Nerd Report: And it’s still the same take when he goes into the suite?

Isaac Florentine: The minute the fight starts, it’s all one take. No cuts. Sometimes you do fake cuts that don’t look like a cut but you do a cut. No, this was all in one take straight. That was the second day of shooting. The challenge was to our cinematographer that was also the operator, it was the first time I worked with him. I didn’t use Ross Clarkson because Ross is in Australia and couldn’t work in America. I used Tal [Lazar] and he did a great job by the way. For him it was very challenging in the beginning. We did a rehearsal a day or two before with the stunt guys in the gym. Then we went and he knew more or less what he has to do, and the flow of the action. 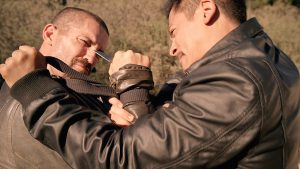 Nerd Report: Some of the people Scott fights in the movie are great martial artists and they have very elaborate choreography, but others are just tough guys. Did you design each fight for the different actors of different abilities?

Isaac Florentine: The concept of this one, it’s not really a pure martial arts movie. It’s more of an action movie and we want the fights to be unlike Undisputed or Ninja. The fights are shorter, more military style and faster style. He’s using more Judo, not such fancy kicks. There are some jump kicks but it’s not the fancy martial arts that you see in the Ninja franchise or the Undisputed movies. Basically, the idea was that the thugs, some of them would be street fighters, some of them would have some martial arts backgrounds. He would use more military style martial arts.

Nerd Report: How did you shoot the very tight fight in the pantry?

Isaac Florentine: [Laughs] We just put the camera in and we shot it, you know. Usually I try not to cut but this one it’s going back and forth.

Nerd Report: Do you think this is a character Scott could play again and have another franchise?

Isaac Florentine: I would love to. I think it’s a great character actually for a TV series.

Nerd Report: Would Scott do it as a weekly TV series?

Isaac Florentine: Who knows? Let somebody run with it first. It’s a great character for a TV series. 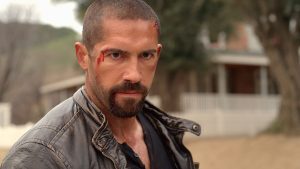 Nerd Report: I agree, but I still want it to be Scott.

Isaac Florentine: Yeah, me too.

Isaac Florentine: Boyka was shot. The picture is locked and right now we’re working on the sound and music. It’s again Stephen Edwards who’s writing the music. The movie is shot. The executives in Millennium love it. I think it’s a really good movie and it’s a great addition to number two and number three. It really elevates it. We all know that Scott is an amazing screen fighter but this movie, as an actor, he is incredible. He’s just incredible. He brings so many layers and so much into the character. The character in this one also has soft parts. He’s done so much within the character of Boyka.

Nerd Report: And this is the first one that’s not in prison, so what does that open up for you?

Isaac Florentine: You know, I don’t know if it’s opened something specific because every script that you get, it’s always about the script, the story and the character. It doesn’t matter where it is and where the setting is. If the story is going to work, it’s okay. It can be even a bare bones story and character like Close Range. It’s really bare bones.

Nerd Report: Are you doing a Christmas movie also?

Isaac Florentine: Not yet. That’s something that’s on the plate. The idea is to do crowdfunding. I got the idea from Frank DeMartini, the producer of Ninja. Frank gave me the script to read. I really liked the script. It was a really good script. It was like a classical Hollywood script. I like the story and I’m in, basically.

Nerd Report: Last year there was a documentary on Cannon films. If they had asked you, do you have some good memories of Menahem Golam to share?

Isaac Florentine: Absolutely. I didn’t see the documentary but I’ll tell you one thing. Menahem Golam is the person who gave me the chance to do my first feature, or my first American movie. So the man was a champion. He loved cinema and he was willing to give chances. People don’t do it today. Menahem Golam was a person who was willing to give chances. He was a person who loved, loved, loved cinema. You know, you learn from everybody. Something that I learned from Menahem, I remember after shooting my first name, sitting there watching dailies. He told me, with his accent thicker than mine, he says, “Florentine, let me tell you something. Cinema talks in POV.” I was thinking about it and I said wow, he’s absolutely right. He was genuine.