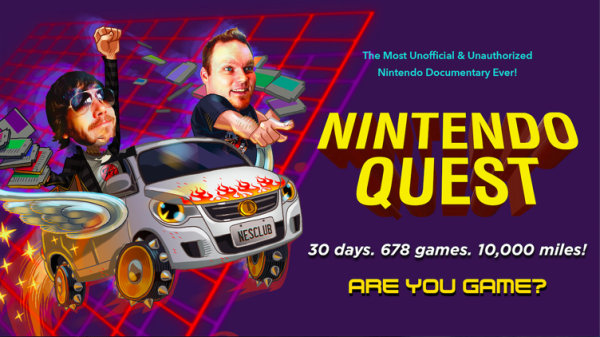 I am a nostalgia hound. I’m obsessed with old movie theaters, old formats like VHS and Selectavision, and yes, old video games. But it’s much better that I watch a collection in a movie than clutter my house with more stuff, so Nintendo Quest is the perfect movie for me.

Director Robert McCallum gave his friend Jay Bartlett the challenge of collecting all 678 NES games in 30 days. To make it interesting, he had to travel around the country visiting game stores and private collectors, no ebay because the movie would be done in a day that way. Also, Jay had to start from scratch, so no using titles from his own collection.

First of all, there were only 678 games produced for NES? That seems low. Like, there’d have to be at least 1000. But, if you figure NES only lasted about five years, maybe they  wouldn’t even hit four digits even with third party licensees. That makes NES feel like an even more elite club.

Learning about the rarest of NES games is fascinating, but even seeing some of the so-called “common” titles included many I had never heard of. Contra Force? Even Franchise Fred didn’t know about that sequel. Cowboy Kid, Snoopy’s Silly Sports, Legends of the Diamonds, Ghoul School, Archon and many more were new to me. Even Mario is Missing was a Mario game I never heard of.

Rob is a natural host with natural enthusiasm, but never condescending. Framing his interstitials with stacks of games and consoles was a nice touch. Jay is an appealing protagonist, and Nintendo Quest gets really real with a story about his father in the middle of this game hunt.

I relate to Jay’s dislike of haggling. I’ll pay a fair price. Don’t play games with me. I don’t want to insult your goods either but if you overcharge me… It’s nice to meet several respectable sellers, whom Jay protects by not revealing the price they gave him. You can’t have everyone begging for deals after seeing this movie.

The film itself is an engaging, complete story but it also provided inspiration for further studies. I am totally going to read up on Syd Bolton’s game museum. An interview with a box art designer opens more doors for the world of game packaging, and a section on the powerful music of NES games articulates why they were so powerful. Thanks, now I’ve got Zelda and Dr. Mario songs stuck in my head again after 20 years.

Nintendo Quest is now available on DVD and still VOD and digital platforms. I highly recommend anyone who liked Console Wars, Atari: Game Over or other retro gaming celebrations watch this too. And if this is your first look back at retro games, let it start your nostalgia all over again. Now do Sega Genesis please!