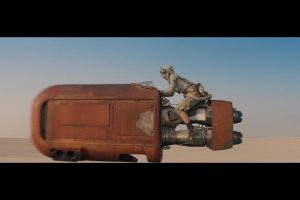 Rey (Daisy Ridley) on the speeder

Daisy Ridley is the new face of Star Wars and you won’t actually see Lupita Nyong’oo’s face in The Force Awakens. Ridley has the role of Rey, whom we see in much of the trailer’s action. Nyongo plays the character Maz Kanata via motion capture. Ridley and Nyong’o were on a panel together for the Star Wars: The Force Awakens press conference and I gathered everything they said together for this article.

Daisy Ridley on the girl power of Star Wars:

“Well, obviously Princess Leia and Carrie [Fisher] are a source of inspiration for girls for the past 30 years. I’m definitely not quite there yet but I hope Rey will be something of a girl power figure. And I think the writing by J.J. [Abrams] and Larry [Kasdan], and the story of which she is woven into richly and holds an important role, I guess there’s no other way except to say that she will have some impact in a girl power-y way. I’m so not eloquent, sorry. She’s brave and she’s vulnerable and she’s so nuanced. That’s what’s so exciting playing a role like this. She doesn’t have to be one thing to embody a woman in a film, and for me she’s not important because she’s a woman. She’s just important. It just so happens that she’s a woman. Like she transcends gender. She’s going to speak to men and women, but obviously we started with Leia and Leia’s still there kicking ass. We’ve got Maz kicking ass too so it’s wonderful to be part of, obviously with Kathy at the helm as well, a wonderful crew and cast of wonderful women.”

Daisy Ridley on being new to Star Wars:

“I wasn’t a huge fan of the whole thing. I’d seen them and I’d had kind of interest but I missed the Star Wars boat as it was, so I didn’t wonder [what happened next] so much. Even so, it was very exciting finding out what did come after Jedi.” 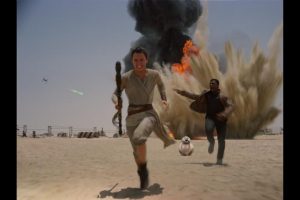 “My whole first day was pretty terrifying. I didn’t find a moment that was any less or more than the other. I think for me it’s being cast in a role, as everyone knows I’ve not really done much before. So other people saw something in me that perhaps I didn’t see myself and I’m still not quite sure if it’s there. So the fear of not fulfilling that potential was terrifying.”

Press conference moderator Mindy Kaling asked Daisy Ridley if she had an entrance song like an athlete, and she actually does.

Daisy Ridley on how long it took to put on the Rey costume:

“20 minutes. Does that seem long or short? Honestly the armor thing takes a while and the wraps and everything. I had a wonderful woman called Callie helping me.”

Lupita Nyong’o on how long it took to put on the motion capture suit:

“Well, I didn’t have a costume because I was a motion capture character, but to get suited up in the beginning took about two and a half hours, maybe three. Then by the end we had it down to about an hour, an hour 15.”

“For me, playing a motion capture character, this was something completely new to me and walking into a room, I had to do this thing where they had to take my picture from all directions at one time. I had to stand in the middle and do a 360 cameras all around me. That freaked me out.  Fortunately for me, J.J. had me be a part of principal photography so my very first experience of motion capture was on the actual sets with the actual actors. So I’m eternally grateful to him for giving me that because it was a great way to get into this wonderful, crazy thing called motion capture. I got to be on those sets and see those things and feel them. The art direction and there’s so much detail even when you’re standing on that set, it’s mesmerizing. I think audiences are going to have a very immersive experience, much like we had filming it. So it was good to have that, and the physicality is something that then carries on into the theater for sure. That was a thing that attracted me to the idea of playing motion capture. The idea of working with a character that wasn’t limited by my physical circumstances. I could work with my body in new ways and I continued that onto the stage.”