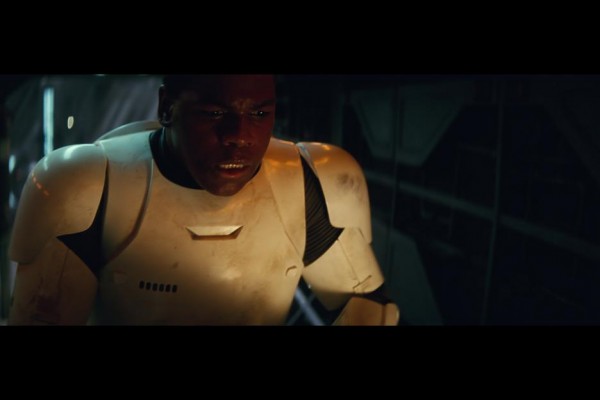 John Boyega became a fan icon in the Edgar Wright produced Attack the Block. Even back then he would tell us how much he loves Yoda, and now he gets to be in the new Star Wars. Boyega plays Finn, whom we met in the first trailer running through the desert without his storm trooper helmet on. Boyega stole the show at the The Force Awakens press conference trying to buddy up with Harrison Ford, while Ford rebuffed his advances. Here’s everything else Boyega said about Star Wars: The Force Awakens.

John Boyega on dealing with the fame of Star Wars:

“I don’t know if I’m ready for this whole thing. I just know that I’m just in it. It’s going to come out regardless. But it should but fine.”

“For me, I’ve got to be honest. I really don’t care about black storm trooper stuff. I couldn’t care less. This is a movie about human beings, about Wookies, space ships and TIE fighters. And it has an undertone and a message of courage and a message of friendship and loyalty. And I think that’s something that is ultimately important. I watched the movie with Kathy [Kennedy] just last week, and I really, really relate to Rey more than any of the characters, and to be in a circumstance where you have to find something bigger than you who you are, within yourself, is something that’s inspirational to me. And I think that people take that away. In terms of the kids, all they’re going to be concentrating on is BB-8.”

“I remember this theory that Finn is Mace Windu’s grandson. Something like that? And I was at a party, and someone behind me just tapped me on the shoulder and was just like, ‘Yo. Black Jedi!’ I turned around and it’s Samuel L. Jackson, ‘He’s my son!’ That was the moment.”

“Oh, I was very excited to use that thing because I think blue suits me. And it was amazing for me to read the whole script and to find out all the things that Finn gets to do. And for me, it’s like, I feel like for some reason, did J.J. know what kind of fan I was when it came to Star Wars and write this role for me? Because I get to wear a storm trooper suit, a rebel jacket. I have a blaster. I use a light saber. I hang out with fricking Han Solo and Chewie. It’s just fantastic!”

“I did. Because Adam Driver has a really long reach. And that’s an issue, but I’ve done my Floyd Mayweather thing, just bob and weave.”

“I’ve had to go back twice, once for Disney Infinity, and the second time for Star Tours, the ride at Disneyland. [Laughs] to be a playable character, I get to play with myself. Sorry, I had to tell that. But it’s been amazing. It was fun. And the characters in Disney Infinity are more of the child-like versions of the characters in the movie. So that was very cool. ‘Yeah, I’m Finn! And I’m in charge now! Hey!’”

“I didn’t know much going in because of the spoilers and that kind of stuff. But I do remember having the sides which were loosely based on who Finn and Rey was. But I just remember during my time screen testing, I was like to Daisy [Ridley], there’s no way that our stories are so simple. And we still don’t know. So I’ve still got some conspiracy theories as a fan as to where Finn comes from. And I’m still trying to figure that out. But I like that it’s a mystery. I like that.”

John Boyega on keeping it together around Harrison Ford:

“I have to say though there was a moment on the Falcon where Harrison, you had the blaster in your hand, and you were trying to skillfully put it in the holster. And Harrison stood there [missing the holster], ‘Damn it. Damn it. Damn it!’ And me and Daisy were just behind the camera like, this is fricking insane. Harrison is fricking right there. But we had to do a scene together and not freak out. It was like mesmerizing to see Harrison in this environment, in the movies that we absolutely loved. And it was good to see you with Chewie. We freaked out, but we didn’t show you nothing. We tried to keep it professional for you.”

“I remember during the audition, not from the original films, but during the audition, I had screen tested. And I heard that I was going to be brought back one last time. And mind you, I had been auditioning for several months. And I just needed inspiration. And I went on YouTube, and I saw Harrison Ford and Mark Hamill’s original audition tape just on YouTube, and that really inspired me to tap into the Star Wars-esque energy because I think that was something I was trying to gauge. And that really inspired me, and I booked it! Thanks, Harrison.”