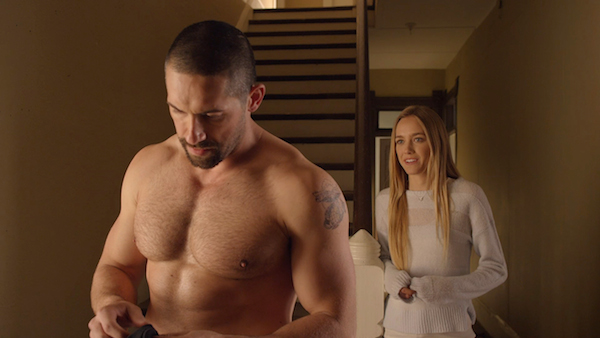 Scott Adkins’ new movie is called Close Range and if you’ve seen Adkins fight, you know bad guys wouldn’t want to get within striking distance of him. Adkins plays Colton MacReady, a retired special forces agent who rescues his niece from kidnappers, only to find the cartel who took her teaming up with corrupt sheriffs in their secluded country home. At such close range, MacReady has to take them out one by one.

Catching up with Adkins by phone was a fun reunion. We’ve been speaking regularly since The Expendables 2 and whether in person or by phone, Adkins is kind enough to remember our past conversations and turn on full badass mode for me. We also got a chance to talk about his upcoming roles in Hard Target 2 and Boyka: Undisputed IV. Close Range opens in theaters December 11 and is now available on VOD and digital platforms. Look for the Blu-ray and DVD January 5.

Nerd Report: It seems like you’re really busy. I’ve seen both Close Range and Zero Tolerance. You’ve got Boyka, Hard Target 2 and now Marvel. Has it been a really busy time for you?

Scott Adkins: Yes, it has and I’d first like to apologize for Zero Tolerance.

Scott Adkins: Yeah, it wasn’t really my movie. I found out the producers put me on the front cover trying to make it a Scott Adkins film.

Nerd Report: Was Close Range the first full action movie you did after recovering from your knee injury?

Scott Adkins: No, no, the first one was Ninja II. Actually, it was Green Street. Then it was Ninja II. Then I did Hercules. I’m past that injury now and I tend to look after myself a bit more. I tend to listen to my body a bit more and just be a bit more clever in my training and also when I’m on sets. I don’t want to get injured again, especially now because I can’t film obviously.

Nerd Report: So let’s start from the beginning. That first one-take fight scene, how many takes did you do?

Scott Adkins: If my memory serves me correctly, I think it was something like six or seven, and I think we went with the take that was before the final take. There was one bit where the camera missed me do a roll around the floor. We tried to do it better but it worked anyway.

Nerd Report: Did you do the jump over the car yourself?

Scott Adkins: I did. There’s a bit of camera trickery there, so I don’t want to give it away but I’m a fit guy. I can jump over cars. What can I say? You know me, Fred.

Nerd Report: I believe it.

Scott Adkins: Yeah, of course you do.

Nerd Report: How long did you have to choreography the fight with the martial artist who uses the belt to strap the knife?

Scott Adkins: That was Jeremy Marinas and he was our fight coordinator. He’s from the 87eleven stunt team. He choreographed it all before I got there. I like to work with good choreographers. Of course I have input, but Jeremy wanted to stick with the title, as we all did, and make it a bit more close range, the fighting. A bit grittier and not have it be so martial artsy, and a bit more real. This is an ex Special Forces guy who would try and kill you quickly rather than do some crazy acrobatic moves. We spent a couple of days filming that fight, I think a day and a half maybe. It was pretty brutal.

Nerd Report: Speaking of close quarters, how tight was it in that pantry?

Scott Adkins: Yeah, even tighter than we rehearsed it in the gym. It got pretty tight once you’re in there with the shelves. They were blowing up the bags of cereal very loud. That was a tricky one actually. We got just a few takes because it was so confined. We destroyed the house. I don’t know who owns that. We completely messed it up.

Nerd Report: In the kitchen fight, was there any utensil left out?

Scott Adkins: I always think of that Brandon Lee film Rapid Fire when he takes the tray of utensils and throws it in the guy’s face. That was some brilliant stuff. We had a plate of knives. We didn’t use that many.

Nerd Report: I’m glad you’re a Rapid Fire fan. I love that too.

Nerd Report: I hope this isn’t too personal a question, but with your hair short, did I notice a scar on the left side of your head?

Scott Adkins: Yes. Know how I got it?

Nerd Report: Would you tell us?

Scott Adkins: I will tell you gladly. You might be expecting some amazing action story or a story about me protecting a young lady from robbers or something like that, but what really happened is that I was drunk and I fell over. I fell off the back of my chair and hit my head and split it open while I was drunk.

Nerd Report: I’m glad you’re okay, but when you play an ex-Special Forces guy with a crew cut, it looks badass.

Scott Adkins: Thanks, Fred. We wanted him to look badass.

Nerd Report: What did being executive producer entail?

Scott Adkins: I can’t say that I’m really producing the movie. It’s a credit that’s there. I don’t know why it’s there to be honest. I didn’t really executive produce it. I agreed to make the movie. There you go. That’s how I produced it.

Nerd Report: Is this a character you’d like to play again?

Scott Adkins: I do like the character, yeah. I could see him going off and having more story. He’s obviously got a colorful past and I’d love to know what he actually gets up to in his daily life. He’s one of those characters who doesn’t say that much. He’s a bit of an enigma, got some secrets. He’s one of those cool silent types, isn’t he? I’d like to know more about him.

Nerd Report: Isaac Florentine even suggested maybe doing it as a TV show. Would you be up for that, every week?

Scott Adkins: Seeing as it’s a bit violent, we wouldn’t have to pull any punches with it.

Nerd Report: We always talk about your action and stunts, but I don’t think you get enough credit for your acting. You do accents like Russian and American. Is American fairly easy for you?

Scott Adkins: Never easy. When you do the Russian accent, you can afford to be not perfect because, it sounds silly, but it’s almost like you’re making a film for the American market. You’re not making it for the Russian market, so as long as it sounds good to an American, your job’s done. But of course doing an American accent, it’s got to be perfect because if you’re making it for a western audience, a lot of Americans are going to watch it. So it’s harder and it’s a lot of work, man. Sometimes by the time you start filming, you’ve just got to try and let go of it, but the more I do it, the better I get.

Nerd Report: I’m super excited about Hard Target 2 because the Most Dangerous Game story is always so interesting. Does this sequel have a new twist on it?

Scott Adkins: Let’s say that it’s a very similar premise where you’ve got these rich, entitled people who are affording themselves the opportunity to hunt a real life person. It’s very similar to the first one in setup, and once it starts, we take it into different territories. I had a great time working with Roel Reine, the director. He shoots so fast. You never stop. It’s one of the hardest films I’ve made but it was really enjoyable and every day was something different. We’re going to have some great hand to hand combat sequences and we have Robert Knepper, a fantastic actor, Temuera Morrison, Rhona Mitra. I’m excited about it too. It’s very cool. Listen, I’m a huge fan of Hard Target. 1993, my favorite actor, Van Damme, and my favorite director, John Woo. There was no one more excited about that movie than me and it didn’t disappoint. So it’s weird that 20 years later, I’m starring in a sequel, but it’s cool as well.

Nerd Report: I got to speak with Roel when he was scouting in Thailand so I hope we’ll be talking again for that.

Scott Adkins: I really enjoyed working with him. I hope I get another chance to.

Nerd Report: Isaac was very complimentary of your acting in Boyka. He said this will let us see some of your real acting abilities.

Scott Adkins: Well, for some reason, when I play Boyka, all the stars seem to align for me. People find that character very engaging so I’m really excited for the release of that film. I’ve seen it. I’m extremely happy with it. I think it’s as good as II and III if not better. We’ll see, we’ll see. Certainly the action is on par. We’re going to release a teaser trailer in a couple of weeks, so we’ll all get to see some of it then, before Christmas.