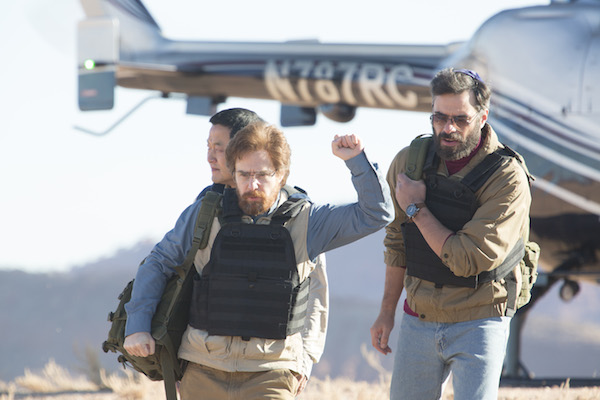 Lionsgate announced they were distributing Don Verdean before it even premiered at the Sundance Film Festival in January. This weekend it is out in theaters and VOD. The new comedy from the director of Napoleon Dynamite and Nacho Libre stars Sam Rockwell and Jemaine Clement as bogus archaeologist fabricating biblical artifacts. I got to speak with writer/director Jared Hess by phone this week. Don Verdean is in theaters and on demand now.

Nerd Report: What got you thinking that the world of archaeology was hilarious?

Jared Hess: I mean, I think archaeology is awesome but the pseudo-archaeology is very funny to me, where people who don’t have any real credentials are taking the Bible and going out trying to find sensational artifacts from the Bible. To me, it just seems so funny where people are kind of trusting in their gut more than science and the actual discipline of archaeology to go out and find these artifacts. 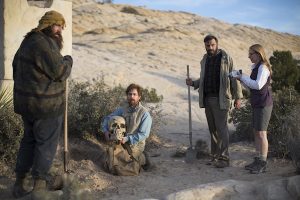 Nerd Report: Is there more of this than we maybe realize?

Jared Hess: Yeah, my grandma had a lot of biblical archaeology DVDs that were suspect. There’s quite a bit of it actually. They all were very kind of low budget, very self-produced on an amateur level with a home video camera but always with narration and some titles that looked semi-professional. But yeah, I just love that aesthetic of those videos. There’s a whole world of biblical archaeologists that claim to have found all kinds of different things. It’s kind of a common theme in their videos that they no longer have the evidence of their discovery. It’s like, “We found this, we found this but it was taken at a border crossing by some guards.” 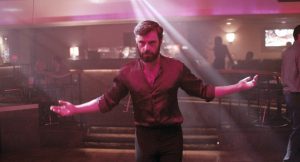 Nerd Report: Are a lot of them from the Middle East or Israel like Jemaine’s character?

Jared Hess: No, but that was always the badge of honor that they had a local, an actual Israeli or a Saudi Arabian that was there helping them. It was kind of a common theme that they’ve got an actual person who’s from there that’s validating, even if they’re completely unreliable. To my grandma who was watching the films, that was important.

Nerd Report: Was Don Verdean back to your old days of indie do-it-yourself filmmaking?

Jared Hess: Yeah, we shot this film in 25 days which is pretty quick. I shot Napoleon in 23 days I think so it was just two days more than that. It was a tight indie schedule but so much fun, having creative control. I live in Utah. We shot all the film in Utah basically. We did shoot some pieces in Israel but it’s fun and creatively liberating to shoot under those circumstances.

Nerd Report: Did the Israeli film board read the script and know what the film was about?

Jared Hess: I’m not sure. We shot mostly second unit, kind of establishing shots for the film. But yeah, we got all the proper permits and everything so they definitely had to have read it on some level. 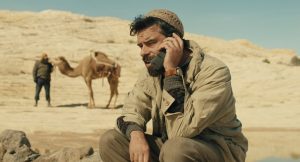 Nerd Report: With only 23 days, were there any days that just got away from you and you couldn’t get the shots you needed?

Jared Hess: Yeah, we had a scene with a camel and there were supposed to be 30 sheep in the scene as well behind Boaz during a phone conversation. The animal wrangler’s like, “Oh yeah, these sheep are totally trained” and they took off into the wilderness. I don’t know if they ever found them. Then the camel started biting one of our actors, so that was a rough day. That was the roughest day I had. Blame it on animals.

Nerd Report: Who got bit? 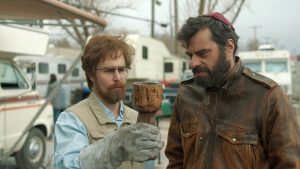 Nerd Report: Has there become a Jared Hess repertory company with Sam, Jemaine and people you’ve worked with before?

Jared Hess: I have a big man crush on Sam Rockwell and Jemaine. It’s so fun working with them the second time. I think when you’ve worked with people a number of times, you get a creative shorthand with them and it just makes the experience so fun and enjoyable. Specifically, this character, when we started writing it, we were writing it with Sam in mind and we were writing the Boaz character with Jemaine in mind. We talked to them early in the process like, “Hey, we’re doing this film about a biblical archaeologist.” It makes the process early on in the writing really fun.

Nerd Report: What was it like going back to Sundance as more of a known quantity?

Jared Hess: Sundance feels like home. It’s in my backyard where I live. It was this place that launched my career. When you go there with your very first film, it’s like you’re not jaded. Everything’s so new and I think going back, after having done a couple of films since then, it’s part of the business but it’s still such a fun, amazing experience. But you’ll only get that one time where you’re like a total virgin to the whole thing and it’s the beginning. You only get that experience once.

Nerd Report: Do you ever get to see other people’s films when you’re at Sundance, or first time films that make you nostalgic?

Jared Hess: Because I live in Utah, every year I go and see as many films as I can. It’s tough when you’re doing press, when you’ve got a film up there, but I did slip away and see a couple films. Because Park City is 10 minutes from my house, I always go and see stuff.

Nerd Report: So you’re likely to see more at Sundance 2016.

Nerd Report: Does Hollywood ever put you into a box, like you’re the “indie comedy guy?” 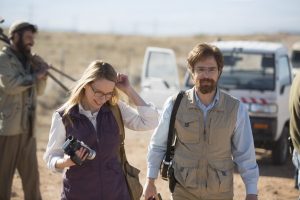 Jared Hess: Oh, I’m sure that they do. There were discussions during any project that I get attached to or start to develop. It’s like, “We’re getting the studio Jared, not the indie Jared, right?” I think if the studios have indie anything it just sounds like poison to them, which is unfortunate, but our world lives and understand its surroundings through labels. Whatever, I think it’s nonsense but I know tons of filmmakers that do indie films as well as studio pictures and they’re the same filmmakers no matter what they’re doing.

Nerd Report: Do you have any funny scenes that didn’t make the cut, that might go on the DVD?

Jared Hess: Not really. Everything that we shot was in the film. We definitely had funny alt takes with different jokes but everything we shot is in the film.

Nerd Report: What can we expect from Masterminds?

Jared Hess: I’m super excited for that one to come out finally. It had obviously gotten tied up with the bankruptcy stuff that Relativity was going through but it sounds like they’ve sorted it out and it’ll be out in theaters next year.

Nerd Report: Was that done before Don Verdean?

Jared Hess: So I actually shot two movies in one year. I shot Don Verdean and then a couple months later shot Maserminds.