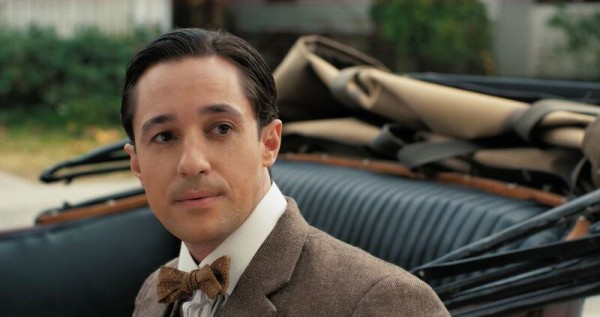 Walt Before Mickey is an HBO level biopic of Walt Disney, which makes it better than Saving Mr. Banks, but still not the definitive Walt Disney movie. Despite the rough edges, I think it offers a worthwhile perspective on the hard times Disney faced before he became the ubiquitous Hollywood name he remains long after his passing.

With a prologue of his childhood, Walt Before Mickey mainly follows young Walt (Thomas Ian Nicholas) as he struggles to get work in animation. He creates his own animation company, but it doesn’t pay the bills. At some points he’s even on the streets, and even with his brother Roy (John Heder)’s help, the future of Walt Disney Animation would seem uncertain if it weren’t a true story.

The downside is this is a very on the nose series of events. The dialogue says exactly what is happening in every scene. Walt’s father didn’t like him talking to animals and drawing, thought it was impractical. Walt doesn’t think in terms of profit, he’s not good at the business side of the film business. The dialogue can be so clunky, I respect Nicholas and the supporting cast for even getting it out because it’s not the way humans talk.

The plus side is that Walt Before Mickey details the cold hard business reality of a legend that other biopics might romanticize. A scene with a street mouse is a tad too precious, but the scenes of trying to hold a business together with unreliable funds felt very relatable to me, on both sides. I’ve been the boss trying to make things happen, and I’ve more often been the employee hearing a lot of promises.

The hard times are desperate and could have just as easily been another story of an artist dying on the street. The most poignant scenes are when Walt learns about things like copyright and corporate ownership, things that artists still face today. Do you take a paycheck now or invest in your work? In this age of the YouTube star and Twitter influencer, it’s important to remember there was a time when betting on yourself was a controversial move. If you’ll notice, Disney keeps a strict hold on their intellectual property now.

Nicholas channels Disney’s childlike wonder and unflappable optimism, even when it’s a detriment to survival. Get it? He CHANNELS Disney, because there is a Disney Channel only now I’m reversing it to say he channels the real Walt Disney in his performance! Because channel can be what you watch on TV or how you let a character inhabit you! I’m using it the second way!

The film falters again when it tries to cram Walt’s personal life into the business story. Walt learning the nuts and bolts of producing animation in a sustainable model and protecting his intellectual property from the financiers are the meat of the story. It’s essentially a movie about art vs. commerce, and Disney would eventually excel at both.