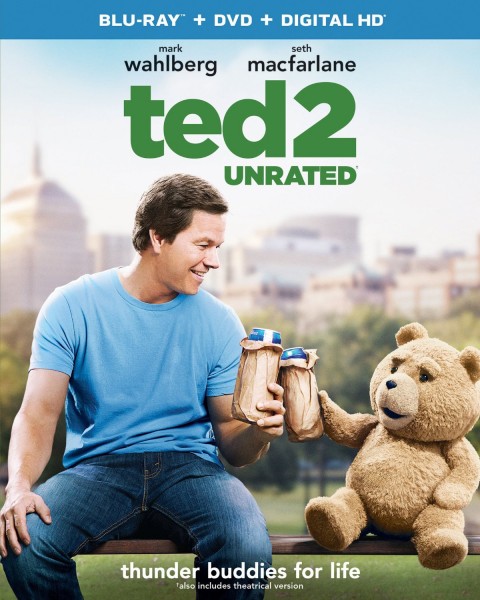 The first 30 minutes of Ted 2 are a great Ted sequel. It’s just random absurdity and it’s hilarious. This is in the extended version, so I’m not sure how long the perfection lasts in the theatrical cut. Having a plot was a mistake since it takes so much time away from jokes and having several plots was really misguided.

The first act is a fast paced joke-a-thon going to absurd lengths. The amount of time spent disposing of John (Mark Wahlberg)’s laptop should have been the focus of the film. That works. Ted (Seth MacFarlane) and Tami-Lynn (Jessica Barth)’s domestic life is a great spoof of working class romantic fantasies dissolving into disillusion, specifically as in Raging Bull. Liam Neeson asking about a breakfast cereal catch phrase is brilliant.

The longer they spend on the story, the more troubling philosophical themes present themselves. Tami-Lynn is punished for doing drugs with infertility when the two male heroes do every drug there is. Her history is also brought up first when they try to adopt, when the real reason they don’t qualify to adopt is Ted. Ted and John make fun of Amanda Seyfried for eating salad, but they wouldn’t like a girl who eats burgers.

And Giovani Ribisi is back? The character he plays could have been any bad guy, maybe one who would waste less screen time. The measures they go to to explain why he’s still pursuing Ted eat up more precious screen time without jokes. Just have some new guy with a plan to get Ted. I love Ribisi as an actor but this character was over and there is literally nobody who said, “I liked Ted, but if they don’t get Giovani Ribisi back for the sequel I’m out.”

The idea of Ted starring in a courtroom drama could be funny, but the trial is actually a minimal part of the story, despite the trailers emphasizing it. Opening arguments make poignant points about civil rights but they are not funny. Bravo for tackling issues metaphorically, and then selling it out for a politically incorrect gay joke. But the film can be so on point with other politically incorrect humor, like making fun of improv comedy with “too soon” references.

Then they go a long way just to be given a lecture that could’ve happened sans road trip. Seriously, cut to the meeting with the big civil rights lawyer. Skip the road trip entirely. I don’t like pot so a pot smoking girl is not my dream girl. I love an insignificant subplot if  it’s funny, but this one drags. A campfire scene just goes on and on. You’d think gratuitous subplots would be enough to hang more jokes on, but they seem to be mutually exclusive.

Yet when they take time out to just make ridiculous jokes, there are enough really funny bits that made me laugh. I enjoyed the study montage set to a song from Revenge of the Nerds, and Michael Dorn and Patrick Warburton cosplaying as their own characters. The extended cut apparently restores many of the funnier moments, like an extended David Hasselhoff cameo.

Does the fact that Ted’s voice box still work contradict continuity? I thought his voice deepened as he grew up with John, but maybe I got that wrong.

On Blu-Ray, Ted 2 has a perfect picture. The Ted visual effect is seamless, and the opening credits are epic with a Busby Berkeley style dance number. Busby Berkeley shot movies in 4:3 Academy ratio and Ted 2 is 2.35 widescreen so fills nearly double. Boston, the east coast road trip and New York look great in HD, but so do the dank bars John and Ted frequent.

Many of the deleted scenes have a fully rendered Ted, so they got pretty far. Two have a very temporary Ted while you hear MacFarlane improvise multiple lines. The deleted scenes offer a few extra pop culture references and jokes, and offend some extra groups who the theatrical and extended cuts missed, but mostly it’s more redundant plot.

Bonus features spotlight a few of the A-list cameos and give mad props to the technical achievements like the aforementioned musical number. It’s odd, there are commentary tracks by major auteurs I have not listened to but something told me to listen to MacFarlane’s commentary on Ted 2. Maybe it was to hear more jokes and insults, or maybe to hear him explain his motivations for the things that didn’t work for me.

One of the very first things MacFarlane and producers Alec Sulkin and Wellesley Wild do on the commentary is blame Jurassic World for cutting into their business. Um, other movies did well in the weeks following Jurassic World. Inside Out did great only a week later. There can be mismarketing but that wasn’t the case with Ted 2. If people really like it, there’s room for both to do well.

MacFarlane really rails on how unequipped journalists are to judge comedy. Yes, that’s why movies like Spy, Trainwreck and Pitch Perfect 2 were so badly reviewed. I get being protective of your hard work. Defensiveness is never helpful but the inability to take criticism is not good either. And hello, Ted 1 got great reviews. It’s mostly the same critics!

You can’t please everyone. You should focus on the fans who got it and supported the movie and are still buying (or at least renting) the Blu-ray or DVD. Most of the commentary is praising the animators and generous corporations who allowed their brands to be used. However, there is no mention of the cat who inspired the name for Seyfried’s character, Samantha L. Jackson.

Interestingly, MacFarlane reveals that Disney makes Star Wars harder to clear. He worked with Lucasfilm on the Family Guy specials on the original. Now it’s hard to even get obscure characters to feature on the fake Comic-Con floor. There’s also some playful ribbing of Barth on the commentary.

I laughed a lot in Ted 2, not just the first act but many things along the way. It was just so frustrating that they kept taking a break from being funny to do things that were neither funny nor interesting. Luckily, I’ll remember the funny parts so every once in a while I’ll have to watch it again remind myself why I don’t unequivocally love Ted 2. At least the extended cut has Hasselhoff.