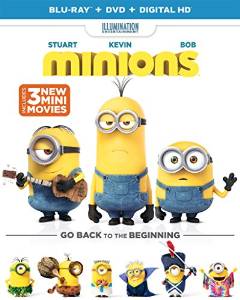 As Franchise Fred, you know I don’t like prequels. I want to know what happens next in a story, not what already happened. Minions is a rare exception to my prequel prejudice. I don’t like the Despicable Me movies, so I don’t care about their sequel. Minions is way better than any Despicable Me, inversely proportional in fact. The Minions prequel is as good as the present continuity series is bad.

It’s also what we suspected all along, that a mostly silent movie with only gibberish Minion speak would be way better than the pseudo-heartwarming tales of Gru and his surrogate daughters. The Minions aren’t the most original characters. They’re the green aliens from Toy Story with the nonlinguistic mumblings of Scrat, but they’re the most appealing characters the franchise has to offer so their movie is a standout success.

Minions is the 2001 of Minion movies as it begins with the dawn of man. The history of Minions trying to find a leader is adorable with vampire Minions and Napoleonic Minions. I began to worry that there’s no fictional leader who could live up to the historical and literary greats, but Scarlett Overkill (Sandra Bullock) is pretty great. Her combination of bravado and insecurity actually speaks more to what makes a villain than Gru or the characters in Despicable Me. She’s a legitimate threat too. It’s not just a harmless comedy villain. Scarlett Overkill is dangerous so it’s good if the movie is the story of the Minions finding a more suitable leader than her.

It’s also a musical, with an oldies soundtrack and some fun covers of classic rock in gibberish. Silent comedy, physical slapstick, musical interludes and a focus on the Minions’ need for guidance make Minions the best story I’ve seen told with these characters. Or maybe not even the need for guidance. The desire to please somebody is universal, and misadventures with seeking the wrong kind of approval are funnier and more poignant. But just focusing on this perspective works better, and it may be as simple as reducing the dialogue to grunts and sounds.

Minions looks great on Blu-ray with beautiful detailed animation. The prehistory segment is a stunner, and the colorful lair of Scarlett Overkill is vibrant. ‘60s London provides a gorgeous setting for animated action sequences, as does the Minions’ transcontinental journey.

Bonus features are fun and kid friendly. An interactive map of Minions around the world lets the viewer select short samples of concept art, finished sequences and educational soundbites of the region. Behind-the-scenes featurettes are also built into an interactive Minion home, but all you’ll really care about are the three new Minion shorts. In this case, I can actually say the shorts are not as good as the feature. The feature is so strong, the shorts are only episodic asides, but they’re still fun.

What this says about prequels in general is that it’s still a dramatic shift from the core franchise. It’s turning supporting characters into the leads which drastically changes the narrative. Not every prequel has that kind of a shift. Some show the same main characters’ earlier years but some go so far back they have to introduce new characters. So we’re dealing with a spinoff prequel in Minions and I suspect it’s the spinoff quality weighing the movie in my favor. Still, it is a reversal of the franchise. Were I invested in Gru and Despicable Me I might not be interested in this detour. But frankly, this is the movie everyone wanted the first time so it’s finally here.