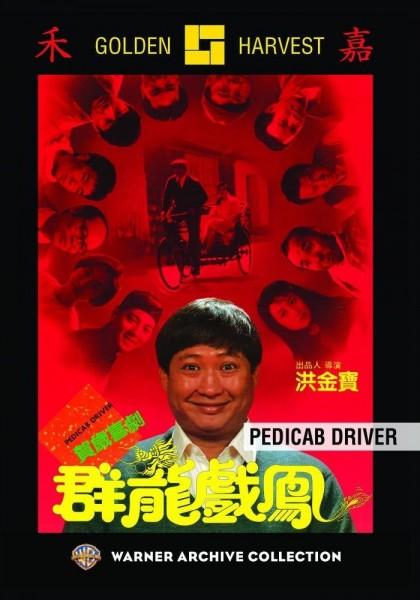 I had long heard that Warner Bos. bought bunch of Hong Kong films in the ’90, but their popularity quickly declined post The Matrix so the films just got stuck in turnaround, unable to be released elsewhere but not profitable enough for WB. It looks like those films are now being serviced via the Warner Archive, which is a great option. The superfans like me can get high quality DVDs and the studio can go direct to consumers with minimal advertising.

All the films released in this Golden Harvest Collection are in their original language with English subtitles. The DVDs looks great, in proper aspect ratio with clear pictures.

I knew Pedicab Driver by legend and a badly dubbed and cropped copy I saw once. It is great to see Sammo Hung in action with the proper gravitas, sharpness and color now.

Blade of Fury became my favorite of this lot with wild wirework mixed with insane violence, decapitations, dismemberment and spitting blood. You don’t usually see elaborate wirework with such graphic consequences. Some of those horse stunts worry me. I really hope they weren’t as reckless with the animals as it looks.

There are sizable scenes so it’s not just one on one fights. They’re not David Lean sized armies but sizable squads fighting amongst each other. Then there’s a Kung Fu competition with some fast and furious one on one. When the wires are visible it makes me nostalgic for the good old days before digital wire removal.

Big Bullet is in the genre of modern day cop movies. It’s more of a cop drama but there are still some big stunts and you know they were dangerous in the ‘90s. The climax to Big Bullet could have been an inspiration for the airplane runway sequence in Furious 6.

Downtown Torpedos is also available from Warner Archive but I did not get a copy to watch and I’m unfamiliar with the film. Based on the above three, it must be worth watching in this format especially. Like all Warner Archive titles, the Golden Harvest Collection films are manufactured on demand. Visit www.wbshop.com to order the above films.