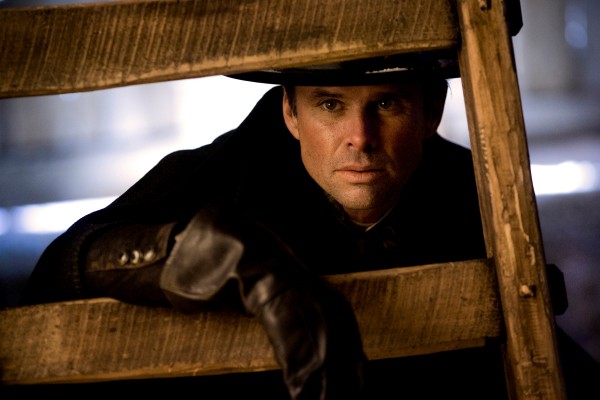 I got to know Walt Goggins (he lets me call him Walt) on the television side covering The Shield and Justified year after year. Goggins was always attentive, remembered me and gave a firm handshake, looking directly in the eye whenever we had a new interview. Even now that I no longer have hair or a beard, he still recognized me and we picked up right where we left off.

If you’ve had a chance to see The Hateful Eight already, you know what a major role Goggins plays in the ensemble. If you haven’t seen it yet, you may be pleased to learn that he gets as much attention as the other seven, if not more than three or four. He’s Chris Mannix, who claims to be the incumbent sheriff of Red Rock, but since the whole film is set outside of Red Rock we never see him sworn in. The Hateful Eight is now playing everywhere.

Nerd Report: Do you think Mannix really was he sheriff of Red Rock or was that a lie too?

Walton Goggins: Oh, you know, after reading the script that Quentin had written to shoot the movie, I said, “I have one question for you. Am I the sheriff or am I not the sheriff?” He said, “I want you to answer that question and I don’t want you to tell me he answer to your question. So he doesn’t know. My wife doesn’t even know. I’m the only person that knows.

Nerd Report: You’re the briefcase of The Hateful Eight!

Nerd Report: Did having done the live reading help your performance eventually when you got to set?

Walton Goggins: Yes, in April of last year, we didn’t know that the film was going to be made but it was one of the greatest experiences of our life. It was an extraordinary event. There were 1600 people at the Ace Hotel there to listen to a live reading of a Quentin Tarantino script. It was an extraordinary evening. It was as electric as every single day was on this movie. We were shot out of the fucking cannon that night and I think it was based on that reaction that Quentin decided to tell the story. Having done that allowed me to get comfortable with the fact that I was going to be playing in Quentin’s sandbox with the likes of Kurt Russell and Michael Madsen and Tim Roth and Bruce Dern. I didn’t know those actors before this movie started personally. They’re all icons to me, as they are to so many other people. Sam Jackson is a friend of mine. For someone like myself who’s been around for a long time, to get to work with Jennifer Jason Leigh, I didn’t know her either. To get the opportunity to work with these people is a lot to digest on the outset. Very quickly, we became a very close family.

Nerd Report: When you finally got to the haberdashery set, was it everything you imagined?

Walton Goggins: How do I answer this question without it sounding trite? It was so much more than any of us could have ever imagined. Even though I knew the parameters of the room because we rehearsed in a room about the size of it here in Hollywood before we got there. There were just some 2x4s up to represent walls and what not. I don’t know how our production designer was able to create that much detail and that specificity in a room that it became the ninth hater in the story. Everywhere Quentin and Bob [Richardson] pointed that 70mm camera, the room is as interesting as anything that we’re doing. I don’t know how he did that. To this day, even when we were wrapping, when the movie was ending, that day, you’re still walking around Minnie’s Haberdashery looking at all the details. So it was more than I could ever have imagined.

Nerd Report: How cold was it in the Haberdashery?

Walton Goggins: F***ing freezing, man. It was freezing! When I say cold, it was colder on a soundstage in Hollywood than it was in Telluride, and Telluride was freezing. Chris Mannix didn’t have a jacket. He had nothing. He had a very small, thin jacket. So it was cold and there was no place to escape from the cold, because he pumped it under the floors. He pumped it coming out of furniture on the side. They had it from above. There was no place to get away from it. Bruce was in the chair and in between takes they would just put an electric blanket over him, put a little cap on him and he would just sit there. We would all sit there for 18 hours a day, all of us together. And the crew who were bundled up were still f***ing freezing. I remember one day when our prop guy Don, he didn’t know I was watching him, he just walked off the stage. The only thing he said was, “God, please let me be warm. Please let me be warm. Please let me be warm.” I think that was the mantra. But we all went through it as a group and at some points it was just laughable how f***ing cold we were, man. That’s all you could do.

Nerd Report: Was the 70mm camera a different experience for you?

Walton Goggins: Well, what was different, nothing changes when you’re telling a story. When you’re playing pretend, it’s just an imaginary set of circumstances and here we are, let’s go. Let’s go there. You ready? So that doesn’t change. What changes is maybe like a horse wearing a new bridle that very few horses have ever worn, because the lenses are so big. The body of the camera is so big and the frame for this movie is twice or three times as big as most actors are ever used to. So once you wrap your head around a closeup where most closeups see here, and you’re asking Bob the question, “Do you see here?” He says no. “Here?” Keep going. “Here?” Keep going! “Here?” Yes. Once you just get past that visual experience of how people will see you, then it’s business as usual.

Nerd Report: Do you give a different performance in the digital version, if he’s using different takes?

Walton Goggins: Oh God, I had not heart that. I know there’s some footage in the film release that will not be in the digital release. I have no attachment to it. For me, it’s not a matter of getting it right. It’s a matter of having an authentic experience. So is it different? You bet it’s different. Every take should be completely different as far as I’m concerned because it’s a different moment and you’re reacting to different things and it’s alive and it’s breathing. I think that’s what Quentin wants. That was certainly my experience on Django and certainly my experience on The Hateful Eight.