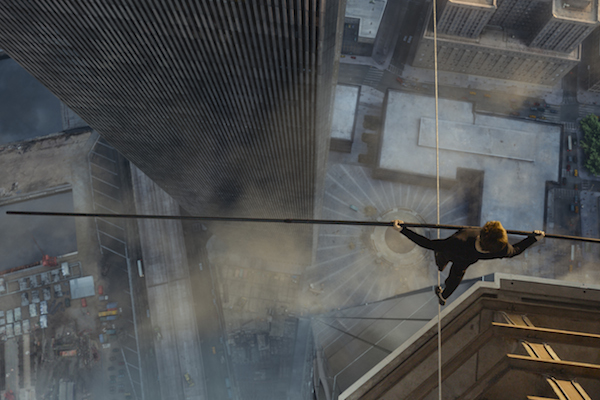 The Walk is Robert Zemeckis’s best movie since Contact. That’s not hard. He totally lost me at the motion capture movies, but even Flight and Cast Away are trite for all their performance and technical achievements. The Walk still seems primarily motivated by the technical question: Can we recreate the World Trade Center towers and film the high wire walk with visual effects? The answer is yes, but the story is more interesting than the process this time.

The whole story is logistics, how Philippe Petit (Joseph Gordon-Levitt) figured out how to even get a high wire across the Twin Towers, let alone walk on it. The rigging is rather fascinating, and scenes of Petit’s early performance endeavors give us an escalating background of his feats and driving ambition.

While the walk itself obviously has to be visual effects, there is a real crowd on the ground. A crowd of extras dressed in ‘70s clothes goes a long way to grounding the visual effects in the real world.

When it comes to the walk itself, more than the height, the film captures the serenity of walking. If it were just about giving the audience vertigo, it probably would have felt like a hollow effect, although I’m watching this movie on 2D Blu-ray, so the scales my have weighed more on the spectacle in Imax 3D.

Still, what I took from the filmmaking and performance was the feeling of isolation and quiet that can really only be achieved in extreme circumstances. It never doesn’t look like green screen, because how else are they going to film an A-list actor walking between two skyscrapers that no longer exist? Oh wait, I just imagined a forced perspective version of The Walk and it was wonderful.

Anyhow, this is the reasonable technique and it works aesthetically because it’s about more than just showing off the digital creation. The story also takes on a bittersweet tone given the real life tragedy that befell the World Trade Center. Petit lost something that nobody else in the world ever had. Not to say that compares with the thousands of lost lives, but it is a perspective absolutely nobody else can share because nobody else ever experienced the towers from his perspective.

The Walk looks great on Blu-ray. The visual effects are exemplified in this format, but also the visual flourishes Zemeckis takes early in the film. Black and white Paris looks surreal in digital black and white with color punctuations, like a Pixar movie with manufactured textures, only it is a real location. It brings out the details of the location with Zemeckis’s technology.

Deleted scenes show some unfinished temporary visual effects, so we do get a sense of the steps involved to bring it up to the level of a photorealistic New York skyline. I was most interested that the green screen got fuzzy around the edges of Gordon-Levitt’s hair. That’s an old video artifact and they still can’t get rid of it on the first pass. There’s also a deleted early wirewalk scene where you still see the wires holding the actors up and there’s a blue plank underneath the wire that can be removed digitally. I give Gordon-Levitt credit for learning to wire walk but I took it for granted that they can even fake the relatively safe walk scenes, because you can’t have the lead actor fall even a few feet.

Two more deleted scenes show a bit more of supporting characters Annie (Charlotte Le Bon) and Jean-Pierre (James Badge Dale). Three bonus features cover the training, characters and visual effects. They talk about how important 3D is but here I am getting the most out of it in 2D anyway.