Stride, or rather Prince of Stride was one of my top picks of anime to look out for this season. The first episode aired on the 5th and I got a chance to watch it on Hulu. This is my Overview of the first episode. I don’t fell like i should have to say this, but I will. Spoiler warning. Are all the squares gone? Alright then. Lets get on with this.

Stride club is the newest action packed sports anime to hit the scene. Other than that, I’m not sure on much else. Honan Academy once had a thriving Stride club with members that could all be read each others thoughts they worked so well together. Cue Nana sakurai. She’s a hardworking girl who’s moved alone from Hokkaido to Tokyo, and has transferred to Honan Academy. Soon after joining Honan academy, she, along with classmate Takeru Fujiwara, basically force classmate Riku Yagami to join the remaining 3 members of the Stride club. When the current leader of the Stride club hears Riku Yagami name, everyone seems to lose their mind for a moment. The camera cuts away to a locker with the name Yagami, which I can only assume is his older brother or someone related to him that used to be on the Stride team, but I guess we will have to wait to find out. 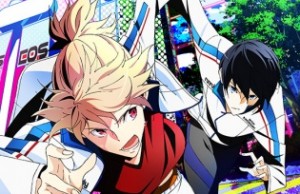 The second half of the episode is setting up a race between two of the current members to race against Riku and Takeru, and this is where the anime shines. The writing is pretty good. One episode in and there was no fan service which I like. I am kinda getting tired of all the anime’s that resort to fan service. You can tell the writers of Stride are confident in their storyline, and it is showing already. The voice acting is wonderful. The visuals remind me of a toned down One Punch, which makes sense since it is the same studio. What was I saying? Oh yeah, the race. So Stride is a race that normally takes place across the whole city, which results in a ton of people gathering and watching the race. I don’t know how school works in Japan, but my only guess is that club rush was going on at there time. So here we are. The whole school is going crazy over the race that is about to take place. Some students are talking saying “Should it be ok? They said to stay away from Stride club.” At this point, I can only think that something bad happened within stride club, and that is the reason it was almost disbanded. Either way, BOOM! The race starts and the animation gets kicked into over drive. Takeru is far ahead his opponent while his opponent is jumping over the stairs and off walls as if he is more worried about doing parkour rather than racing. After going from the rooftop to grounds they are approaching their teammate. Nana is informing Riku that Takeru is coming and to start running, as you would in a relay race. You start building up speed before the passer gets to you to tag you. Well here they are. Just like in the flash back at the beginning of the show, they are in perfect sync. SLAP! Their hands connect and Riku takes off. Racing against his opponent, they are neck and neck. Cut to the end of the race where they both cross at the finish line. It turns out they both finished the race at the exact same time. Right down to the millisecond. One thing keeps bugging me. The leader of stride club and Riku look creepily similar. Oh well. Guess we will have to wait until next week to find out more about this story. 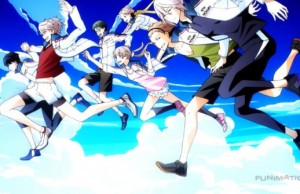 So what are my thoughts? I really enjoy the premise of this. This is a very different type of anime compared to what is out there right now. The story seems like it has a ton of potential and I know I am going to be following this anime closely. I want to see these characters develop and grow. Yes we were introduced to a ton of characters for it being the first episode but that isn’t always a bad thing. I don’t think we were introduced to any unnecessary characters, so we should have a lot of time to get to know these characters over a longer time. so what’s the verdict? I say give it a watch. If sports anime don’t interest you, I would still suggest you give it three episodes. The OST and beautiful animation and colors might change your mind.