Just a quick introduction. Spoiler Alter is the name of the articles I will give to them when they contain information about the most recent episode of what ever anime I am talking about. In this case, I am talking about Gate season 2, episode 2. So, when you see “Spoiler Alert” in the title, know it is essentially my review and thoughts about the most recent anime. Now, without further ado, lets get into this amazing episode. 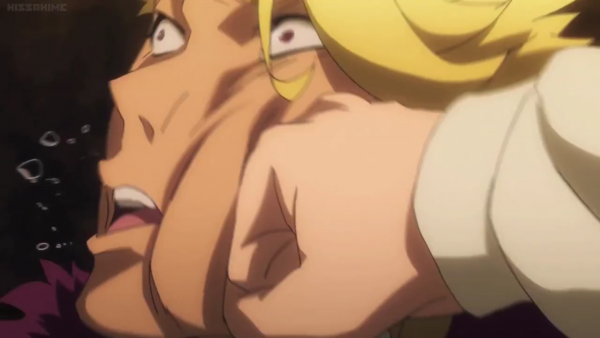 When we last left off, we saw that they are having an earthquake, or as they like to call it, an “Earthshake”. Pina and one of her Rose Knights are cowering on the floor as all this happens until Itami walks up to them. Pina asks Itami why he isn’t scared for his life and he tells her that the ground shakes all the time in japan. You can’t blame Pina though. If you didn’t know what an earthquake was, it would be pretty scary during your first one. Once the ground stops shaking, Itami is telling everyone to get a status report from all the station locations. With Pina too scared to go check up on her father herself, she asks Itami, Souichirou, Shino and Kouji the Japanese ambassador to escort her to the palace. After some coaxing, the all agree to go. 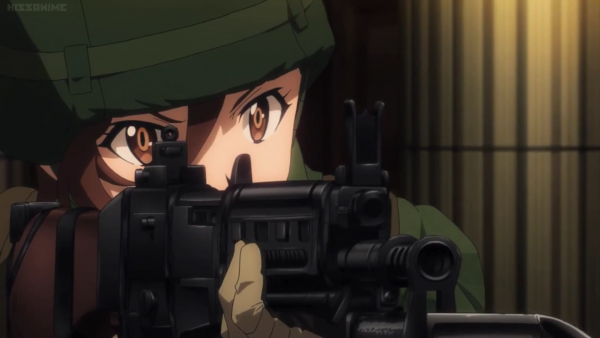 Here is where the episode starts. If you read the light novel or the manga, you know what is going to be happening and my heard was pumping from the beginning. So, they all arrive at the palace. All the guards are cowering not asking anyone to identify themselves. Once they get into the palace, the JSDF members essentially “Wait out in the hall” while King Molt Sol Augustus gets dressed. As he takes his throne, Pina starts ordering the guards to get the high class people to the palace while the maids make up the guest rooms. Once the room is empty, Molt Sol Augustus takes notice of the JSDF members in the room and asks why they are here. Pina says she brought them to advise about the “Earthshakes.” After talking for a little, everything seems to be going ok, until Zulzal shows up. Remember him? Pina’s douche brother? Well he shows up demanding that his father Molt Sol Augustus go with him right now because someone told him that the ground shakes are going to come back. Who told him? Well obviously it was someone from Japan. As he brings out his prisoner, the group realize that she is Japanese and they lose it. 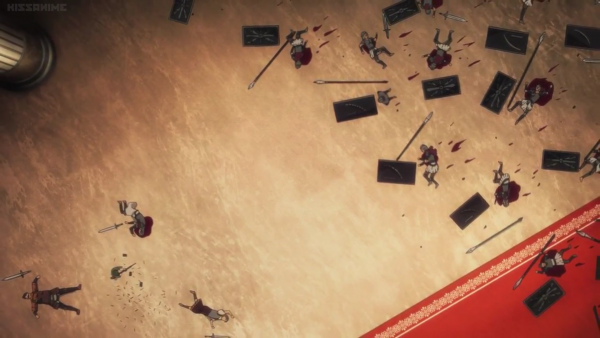 Itami runs up at Zolzal and punches him right in the face. Shino runs up and cuts the leather cuffs off her and and picks her up and brings her to safety. Out of no where, Itami turns on beast mode like nothing. Zolzan orders the guards to attack. Itami cocks his hand gun back and gives Shino and Souichirou the go to fire at will. This fight is all Shino all the way. She puts the bayonet on her rifle and just goes to work. She ends up taking out most of the guys who are not guards. Once Zolzan orders them to line up, she just lights them up with three mags. She tells the survivors throw down their weapons if they don’t want to fight anymore. With all that done, Itami asks Zolzan if he has anymore prisoners from when they invaded japan. He refuses to answer, so he is forced to get smacked around by Shino. Real talk? I would hate to make her mad. 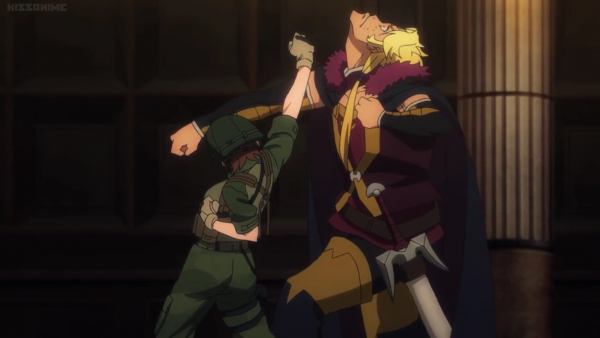 Once he is beaten into the ground, Itami comes up to him and points a gun to him. He ask’s where the rest of the prisoners. In comes one of his prisoners to save him. She tells Itami not to shoot him. Itami then asks him to tell him where the prisoners again. Zolzan says the only other one that survived was sold off as a slave. At that point, the JSDF decides to leave and take the one prisoner back to Japan. This is the end of the vital information to the episode. This episode has been one of my favorite since I read the manga. This episode had the perfect amount of action. We have a reason to not like the other world beyond the game. We finally see the tension building up and with the coming tension. 9/10 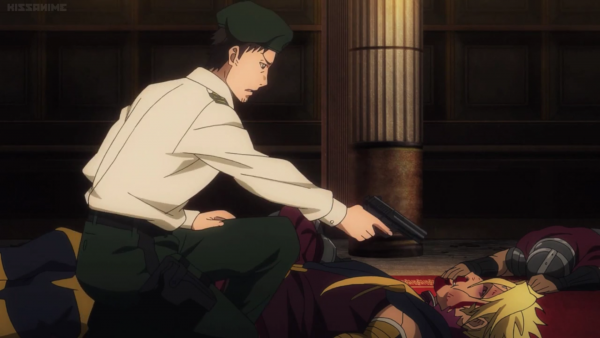