I have been waiting for Ip Man 3 for a long time. Ip Man is a great character for Donnie Yen to play because he is gracious and modest, yet the world’s greatest fighter when pushed. Ip Man told the story of how he survived Japanes occupation in World War II, while Ip Man 2 showed him opening a dojo, defending Wing Chun Kung Fu, and at the very end telling a young Bruce Lee to come back when he’s older. 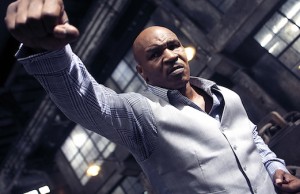 Ip Man 3 begins with a grown-up Bruce Lee coming to take Ip Man up on his offer, but this is not the story of training Bruce Lee. Ip Man now faces a local gangster (Mike Tyson), as well a traitorous Kung Fu instructor. I got to speak with Yen and Tyson in Los Angeles just before I left for Sundance, and I’ve just now found strong enough Wifi to post the interview! Ip Man 3 is now playing.

Franchise Fred: Ip Man’s fighting style is to look effortless, but I imagine it’s very strenuous on you.

Franchise Fred: How do you make it look effortless? You don’t even sweat. 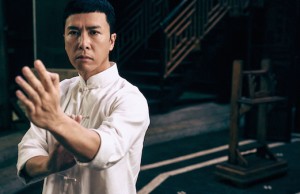 Donnie Yen: It’s part of acting as well, but it’s also part of many years of being a martial artist. You just half to stay calm. Especially dealing with Mike Tyson, right. I just have to tell myself, look, you’ve got to bring the best out of that energy to stay focused, not to get hurt.

Franchise Fred: Mike, did you like your introduction, playing with the little girl when we’re about to find out he’s really a dangerous gangster?

Mike Tyson: Most gangsters are the nicest people. That’s why they’re gangsters. They don’t have to be tough and mean. I couldn’t ask for anything better. The casting and everything was perfect.

Franchise Fred: You charge at Donnie like a bull. Were you thinking that when you performed the fight scene?

Mike Tyson: That’s what they told me to do.

Franchise Fred: When you punch the glass, was it fake movie glass?

Donnie Yen: I told you. Everybody loved it.

Franchise Fred: Donnie, you crouch down on one leg. I know from doing yoga that crouching on two legs is hard. How long did it take you in your practice to be able to do it on one?

Donnie Yen: Oh, it’s easy to get down but it’s hard to get up.

Donnie Yen: Well, we paved the way for Bruce Lee’s entrance. He is Bruce Lee’s teacher. Somehow you have to introduce Bruce Lee. There’s no better way of blending that Bruce Lee philosophy to be water into that scene. 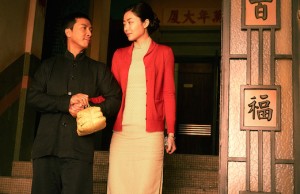 Ip Man and his wife

Franchise Fred: Is it important that each Ip Man address some real history of his life while telling sort of mythological stories about him?

Donnie Yen: It’s more fictional. From day one, we didn’t want to make a documentary. We wanted to borrow this real person, this icon. He’s famous for being Bruce Lee’s teacher, but honestly to make a movie out of it, we didn’t feel we had enough elements to make a brand new refreshing screen hero. That’s why we created this Ip Man. We try to stay true in certain characteristics, not as far as storylines.

Franchise Fred: Well, the first movie did deal with WWII.

Donnie Yen: Japanese occupation, in number two he brought his family to Hong Kong and wanted to make a living. Out of these three, it’s about family besides being the martial arts grandmaster. We do have a theme in each installment. The first one is, under the circumstances, surviving. The second one, making a living. The third one is about life and death.

Franchise Fred: Are Ip Man’s philosophies at odds with being a professional fighter for sport? 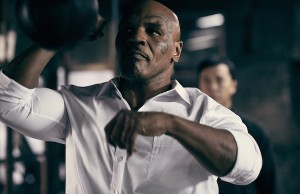 Mike Tyson: I don’t know. We haven’t discussed nothing about that, but listen, in Islam, boxing is folly. We’re really not supposed to fight or be professional fighters, but that’s not the reality of life. Even though you know you’re going to lose, you still have to fight.

Donnie Yen: For the movie.

Mike Tyson: Of any other fight, Ip Man was the easiest to learn. Any other fight I did was complicated. The guy would kick you in the head, you gotta block, you don’t know if this guy’s going to knock you out or anything. Holy moly. It was intense on Ip Man 3. It was intense. I gotta watch these guys. I might have to hit this guy for real if he kicks me hard.

Franchise Fred: Do you have new respect for what action hero actors do?

Mike Tyson: Funny that you said that, because when I went back home I said I have a totally different respect for Westley Snipes, Sylvester Stallone, Arnold Schwarzenegger. If they’re doing this themselves without stunt doubles, they might as well be in the ring fighting. It’s the same training and working out, every day for three or four weeks. They’re doing it longer. I was just a costar, a guest but he’s doing the whole movie so that’s just crazy. You might as well be an athlete if you’ve got to work like that.

Franchise Fred: Was it also a different challenge playing a character who’s not Mike Tyson in a cameo?

Mike Tyson: I loved that. I loved playing that guy. I played that guy better than I play Mike Tyson. Mike Tyson sucks.

Franchise Fred: What were the most difficult fight scenes for you, Donnie? 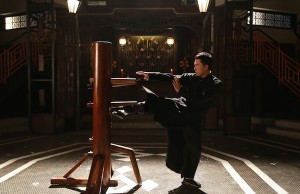 Donnie Yen: For me, fight scenes, I’ve been doing it for 33 years. For me right now it’s about precision and control. When I started off, especially back then when we used to make Kung Fu movies, it was a lot more macho. We had no padding. We really had to hit each other and kick each other across the room. Our bodies are all screwed up and injured from those times. Right now when I work, it’s more about placement. Before, when we punched, we really hit each other and made the other person feel it. Now it’s about the acting. Now I can just tap and the person who’s been hit reacts to that. So right now it’s more about the perfection of the art rather than trying to be more macho about it.

Franchise Fred: Crouching Tiger, Hidden Dragon is a different kind of martial arts, more artistic. Was Sword of Destiny a different style for you?

Donnie Yen: Different kind of fighting. For me, Donnie Yen has three styles when it comes to screen fighting. The Kung Fu style with a lot of stances and we call it animal styles like the Shaw Brothers, different poses. The other kind is swords and weapons, bigger movements. At time we tend to have wires. Don’t get me wrong. Some people say, “Why are you flying around?” That’s part of Chinese culture. Why is there a superhero culture in America? You have Batman and Iron Man. In Chinese, this is Chinese culture, the swords and everything. The third kind of fighting is contemporary. We borrow boxing or Muay Thai or MMA. I try to play the part. If I’m playing a cop, I’m not going to be posing. That doesn’t fit into the character but if I’m playing the Grandmaster, Ip Man is a Wing Chun grandmaster so he does Wing Chun.

Franchise Fred: In Star Wars: Rogue One do you get to fight, or is it more of an acting role?

Donnie Yen: I can’t say too much about it, right, but I think they’re clever enough to have me in there not to miss what I have to offer. [Puts up fists.]

Mike Tyson: He’s going to be one of those aliens f***ing everybody up.

Franchise Fred: Did you two exchange any training tips?

Mike Tyson: We talked about fighting and stuff.

Donnie Yen: I learned a few tricks from Mike. He shared his boxing [tips]. I’m so fascinated by that.

Franchise Fred: Mike, how are your pigeons doing?

Mike Tyson: They’re doing awesome. We moved into a new house, five houses down so today or tomorrow we’ll start moving them in and building their home. It’s something I’ve been doing all my life.