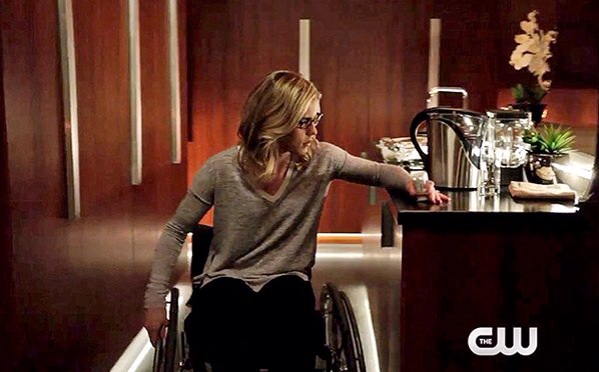 With everyone on team Arrow having nicknames it’s time for the last member to get their nickname, yes it’s Felicity. Now bound to a wheelchair after an accident, many fans and been speculating that She would take on the nickname oracle, but it seems that isn’t the case now, but who will she be? Well you don’t need to wait any longer because tonight’s episode of Arrow will address the new nickname.

Arrow is all-new, tonight at 8/7c on The CW. DIGGLE VS. SHADOWSPIRE — Diggle (David Ramsey) must learn to trust his brother Andy (guest star Eugene Byrd) when an enemy of their wartime past, an agent of the criminal organization Shadowspire, pays a visit to Star City. However, Diggle learns more than he bargained for about their shared time at war. Meanwhile, Oliver (Stephen Amell) has to learn a whole new way of life. Charlotte Brandstrom directed the episode written by Brian Ford Sullivan & Emilio Ortega Aldrich (#411).