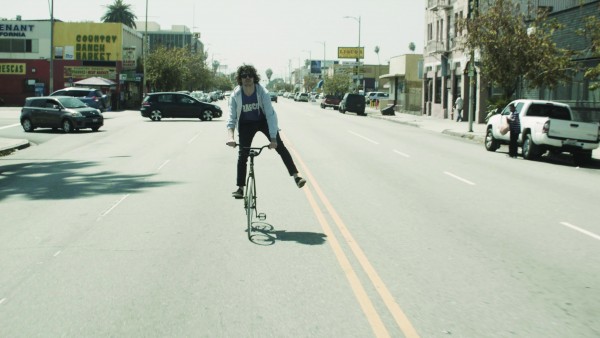 I’m sure the people who made and are depicted in The 4th are lovely, humble people making a self-aware comedy. However, there is a chance that they are as oblivious as the characters they depict, and they think this is all a series of comic misadventures. It is not. Everything that happens in The 4th is a result of bad decisions and immature behavior.

Jamie (Andre Hyland, who also wrote and directed) needs to buy lighter fluid for his 4th of July barbecue. He doesn’t have much money because he’s waiting for a check and he’s behind on rent because of it. As soon as he’s left the house, Jamie is getting in trouble with his bicycle destroyed, stranded by an Uber driver, nearly arrested and losing the lighter fluid.

It’s true, the Uber driver was stuffy, but he’s not wrong. When a sketchy passenger gets in your car, you protect yourself. It’s the risk you take when you drive for a ride service, and the risk we take when we take one, but why argue? You’re going to teach the Uber driver how to provide better service? Just handle your own sh** and be done. When you’re depending on someone else for service, it doesn’t serve you to be entitled. The customer is always right, but if the service provider decides not to serve us, who really wins there?

Likewise, rules may be annoying but not worth fighting over a nuisance. Way to challenge the oppressive structure of “no bikes in the store” and “bathrooms for customers only.” In the time it took to argue about it, you could’ve bought something cheap and used the restroom. Even with the police, don’t argue. Let it get sorted out. That way they feel empowered having done their job, and you still win when you’re vindicated.

All of these problems could have been solved by simple adult behavior, like carrying enough cash to get through an emergency. Even $20 would suffice. I get it, some people are struggling and don’t even have that. They probably shouldn’t leave the house at all then. Be glad you’re not homeless and don’t push your luck. Jamie can’t even cook for himself, which is probably supposed to be funny. Fine, eat expired frozen meat. The sequel can be The 5th when they’re all in the hospital with e coli.

Jamie also hangs around a lot of people who cause more trouble by making bad decisions and not following directions. That’s another part of being an adult, choosing the right people to be in your life. You don’t want to be heartless but some people can be a liability. In a way there’s a sense of tragedy that this is all they have, a pathetic barbecue on a day off. The film doesn’t take that angle though. We are supposed to consider Jamie the underdog hero trying to make everything right.

As indie improv movies go, The 4th is stronger than most. The dialogue does forward the plot and they even get some funny lines out of it. So that’s one thing they can do right, articulate their own sense of entitled injustice. I suppose I have to admire some of the elaborate Rube Goldberg antics that escalate. It’s just the fundamental concept makes it hard for me to be amused.