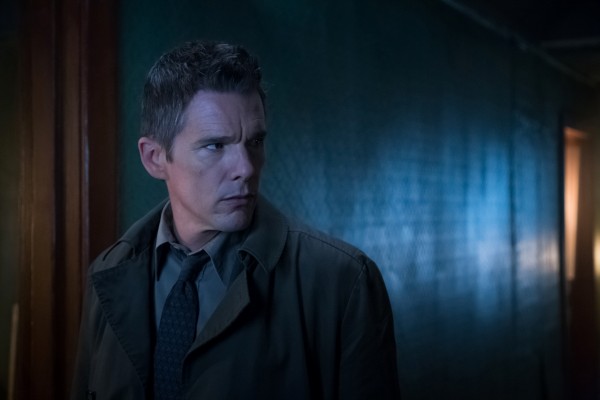 Ethan Hawke has a new movie out in theaters this weekend. Regression stars Hawke as a detective investigating a suspected Satanic cult ritual, using regression therapy to find clues in the memories of its victims. Alejandro Amenebar wrote and directed Regression.

I got to speak with Hawke by phone this week to discuss the new film. Having spoken with him many times for films like Before Midnight, Boyhood and Predestination, I was impressed by how each film inspires the same level of thought, no matter the genre. Regression is in theaters now.

Nerd Report: I’m always impressed how you’re on the front lines with all of your films. Is that part of your passion to take such a hands on role?

Ethan Hawke: I don’t know. I’ve just been doing this a while and it seems important to stand by the process at every level. From when you’re first in preproduction to shooting to finishing films and then to releasing them, there’s always different stages in a film’s life. And with some films, it’s really easy and some films it’s always hard. It’s a little mysterious to me. Every time you start a movie, you have this secret hope it might be brilliant. Some turn out okay and sometimes they don’t.

Nerd Report: If we look at your post Boyhood movies, would we notice anything? I know doing Boyhood for 12 years never kept you from doing other films, but did having finished it propel you into a new stage?

Ethan Hawke: No, I wouldn’t say. There’s a couple films that have changed my career a little bit. Dead Poets Society obviously changed my life. Training Day in a lot of ways is my first really adult performance that kind of helped me make the transition into another part of my life. This year has been one of my favorites, the year after Boyhood came out. I did this movie Good Kill with Andrew Niccol that I feel really proud of. The movie Predestination is one of my favorites I’ve ever made. I finished this movie, a Chet Baker biopic that I really kind of killed myself on. It’s a really strong movie, so in some ways it definitely feels like a new chapter. In truth, for pretty much the last 30 years I’ve been doing the same thing. I feel a little bit like a cat. I keep trying to stay alive and keep trying to be a part of this profession that I love so much.

Nerd Report: As a film lover, were you a big Amenebar fan?

Ethan Hawke: That’s why I did the film. I was very interested in him. This film is kind of unique. Every now and then, someone comes along and they have a voice with a camera that’s different than other people’s voices. I think it was pretty clear with Open Your Eyes and The Others, this guy had a voice. The Sea Inside continued that. Then he did Agora with Rachel Weisz that was so interesting and strange. I really liked it. So I did this really for no other reason than I felt that he was an interesting person to work with.

Nerd Report: Was it different to work for that voice with the camera?

Ethan Hawke: It was very different. I have to say, it’s the first time in my life that I really just had to give. All my normal tools for helping directors just didn’t work. It was the first time I really felt like I was helping someone paint. He had a very clear vision of the movie that he wanted to make. It was about executing those ideas. If I have an idea about what this character would dress, it was the opposite of what Alejandro wanted. If I had an idea about what this character might say, it was the opposite of what Alejandro wanted. But he’s so kind and loving and supportive that I just gave in to doing it his way.

Nerd Report: Had you heard of regression therapy before this movie?

Ethan Hawke: No. I’ve always found any kind of high end psychiatric hocus pocus pretty fraudulent. One of the fun things about being an actor is you’re not just studying human behavior but you’re also studying human behavior throughout the centuries. As a student of acting, you’re also a student of writing. Whether it’s Shakespeare or Chekhov or Pirandello or Maupassant or whatever it is, you see that human beings are kind of driven by the same fears and hopes and dreams and desires throughout history. Psychiatric fads come and go, just like iPhones and horse carriages and all that stuff, but what’s happening inside our hearts is pretty consistent. So whenever anybody thinks they’ve got it all figured out, I figure they don’t have it all figured out.

Nerd Report: Have you learned anything about portraying fear from doing a number of horror films like Sinister and The Purge?

Ethan Hawke: Yeah, I guess I did. I really learned a lot of it from Scott Derrickson. Sinister was a really interesting experience for me. That’s really a flat our horror film. Yeah, I’ve made thrillers before but I’d never made a horror film, like a really Friday night midnight scary movie. Scott did the most interesting thing. He cut together the footage of some of the more famous scenes, like from The Shining. If you see Jack Nicholson be scary in The Shining without seeing Shelly Duvall’s fear on her face, he’s not scary at all. He’s kind of silly. It’s actually her that makes him scary. Scott really taught me that. Fear is not a sexy emotion. Actors love to be cool or like to be funny, they like to be badass, but fear is not an emotion that people find attractive. So it’s one that people are often scared of playing or shy of playing. I learned from Scott how to embrace that and how to really use that as a tool.

Nerd Report: Did you do any special research for the detective part, or did you draw on any of your past work playing cops?

Ethan Hawke: I did this movie right after Regression called Born to be Blue. It follows the life of jazz musician Chet Baker. That’s the kind of movie that required a ton of research. Whenever I tried to do research for Regression, I started realizing that this movie is different. This movie is kind of happening in Amenebar’s head. That’s what I was saying, like if I had an idea for the movie, I started doing some research and that was not what Amenebar wanted. He didn’t want Minnesota accents. I would have this idea that I should be studying the way real cops or detectives dress. That’s not what he wanted. It was very clear that he saw the movie in his head and it was this dream landscape where he could talk about the ideas he wanted to talk about. It really had nothing to do with research of real detectives.

Nerd Report: Do you stay in the intensity of the film at the end of the day, or are you good at leaving it on the set?

Ethan Hawke: Some movies are different than others. Characters get inside you. The deeper you go down the rabbit hole, the harder it is to come out. So there’s no one answer to that. You’re always trying to dance around inside you’re own imagination. In a lot of ways, it’s a little bit like a guided meditation. If you’re doing a comedy and you’re walking yourself through seeing what’s hysterical and funny and silly about life, then that carries into your day. If you’re playing Macbeth and all you’re doing is thinking about tragedy, death, greed, power, psychosis and suicide then that makes its way into your day. One of the more challenging aspects of the profession as I get older is how to continue to go deeper down the rabbit hole without getting lost.

Nerd Report: When the movie is more plot driven, is that different for you than when you can really just talk about the characters like in the Before movies?

Ethan Hawke: My joke is always the more plot there is, the more you get paid. There’s a certain falsehood in creating drama always. What’s wonderful about the movies I’ve gotten to make with Richard Linklater is that Rick’s allergic to plot. Whenever he sees the workings of plot, he just gets bored. In general, audiences love plot. It’s this thing people love. What’s going to happen next? What’s going to happen next? In mainstream movies, your job as an actor is to try to sell the plot. The more plot there is, the more bad lines you have, is always what it is. TV shows are chock full of plot. Actors have to sell these terrible lines.

Nerd Report: Since you mentioned Dead Poets Society at the beginning of this interview, that’s become such a classic and meaningful to so many generations. Was there a point shortly after you made it that you realized it was going to endure?

Ethan Hawke: You know, when you’re 18 you have no idea what the word endure even means. So no, I don’t think it was until years later when I see people with “carpe diem” tattooed on their arm, or people still in restaurants say, “Oh captain my captain” to me. It’s such a rare experience to have a movie connect with people on such a deep level and I don’t think I could have known then. I remember being in a restaurant at about 18, Robert Sean Leonard and I went out to dinner. There was a table, a group of people and they all stood on their chairs and said, “Oh captain my captain.” We assumed that would be normal, it would happen when every movie comes out and it certainly wasn’t.