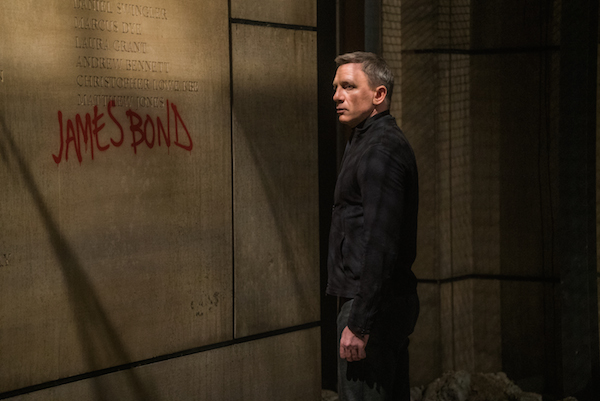 Spectre is the Daniel Craig 007 movie I’ve been waiting for since Casino Royale. I was concerned that they were still trying to tell an origin story in his fourth movie, as the continuing origin of Skyfall was already too much for me. Spectre actually gives the Craig films a continuity that moves them forward in a nice way.

I’ve been lamenting since the Brosnan movies that I just want to see James Bond go on a mission. Spectre is the closest we’ve gotten to that since they ran out of books. It’s still Bond going rogue, for the third movie in a row now, but at least this time he’s going rogue for the sake of the mission. Previous plots where he goes rogue to seek revenge seem beneath a hero as classy as James Bond. In Spectre, MI-6 is vulnerable and it’s actually Bond’s investigation that can prevent them from dropping the ball on a major terrorist act.

Bond is smarter than MI-6 on this mission. I’m just happy that the whole plot of Spectre hinges on Bond being active. He’s not wandering through the plot like a lost puppy anymore. This is the promise we were made at the end of Casino Royale, and the end of Quantum of Solace. This is James Bond at full capacity. He’s not in rehab. He’s not still learning the ropes. He is the agent of this story, with all the strength and danger Craig brings with his portrayal.

Spectre is still dabbling in Bond’s past, but with an appropriately light touch. The personal elements are almost incidental. Yes, Franz Oberhauser (Christoph Waltz) has a past with Bond but that doesn’t change his motivation. He would still be the mastermind he is independent of Bond. The backstory which I don’t want to spoil actually gives continuity to all four of the Craig films and incorporates elements of Fleming that made me giddy.

It actually addresses some of the revisionist tendencies of the recent movies in a pleasing way. After Casino Royale it seems the films had a bit of confusion about whether they were the “new” Bond or working their way back to the formula (reinstating a male M and a new Q and Moneypenny for instance). The solution is it’s always a little of both. Just like Casino Royale got to reinvent Bond’s first mission in 2006, subsequent adventures can address Bond’s unhealthiest habits without trying to change him.

Let me talk about Spectre as a standalone movie. I much prefer the sparse look of Spectre to the visual flamboyance of Skyfall. I definitely want to see this again in IMAX to see how the rest of the frame deals with empty space.  I suspect one green screen scene but it’s a bizarre enough setup I’ll allow it.

With the longest running time of any Bond film to date, Spectre is in a constant state of buildup. It’s always unfolding. I suppose that is what any story is supposed to do, but in a genre driven by set pieces, it’s striking. I love the silence of it the most. One of Bond’s greatest skills is the ability to wait. Spectre really delves into Bond observing, allowing secrets to be revealed. It feels very From Russia With Love.

Interestingly, we don’t ever know exactly what the gadgets do until Bond uses them. This deprives us of the traditional Q scene where we get a full briefing and eagerly anticipate the gadget’s application in the plot. This works too with hints and innuendo in the Q (Ben Whishaw) scene, and a pleasant surprise at the reveal.

At a certain point, Spectre can’t help but repeat some Bond history. There are fights in familiar locations, and reversals of classic chase vehicles. Hinx (Dave Bautista) introduces himself with a violent display. That again speaks to a little of both. What would it look like if the James Bond that Daniel Craig established approached familiar scenarios? That also made me giddy inside. There’s plenty of new scenarios too, room for everything.

Well, there’s so much Bond history at this point, you can’t have everything in one story. That’s why you keep making them so each one can be a little of this, and a little of that. In Spectre we get to see Bond mouthing off to M (Ralph Fiennes), immune to reprimand. Maybe the next one can have a friendly mission briefing in M’s office, and maybe he can throw a hat on the rack in Moneypenny (Naomie Harris)’s office. It’s all good. For Spectre, something that happened in the first frames of the movie made me so happy, and I only got happier and happier the more was revealed.

The parts of Spectre I expected to look spectacular on Blu-ray do. The opening sequence in Mexico with its golden tint, the severe extremes of Oberhauser’s hideout and the train fight all maintain their spectacle on Blu-ray. Say what you want about the Sam Smith song, and you’re probably right, but the title sequence is all shiny goodness. I love lighting Craig like a golden God and it’s almost animated in its appearance.

Unfortunately, a few of my favorite moments don’t quite hold up. The first Spectre meeting that Bond spies on has an annoying flicker to it on Blu-ray. Same with his seduction of Lucia (Monica Bellucci). It’s a little surprising something like that could slip by, but it makes up for it when you see the asteroid crater and snow chase.

A modes collection of extras puts the main focus, not surprisingly, on the elaborate opening sequence at the Day of the Dead. In 20 minutes they do manage to capture all the extensive preparation that went into that sequence. The collection of video blogs are only about a minute each but actually convey everything they need to about the new cars, characters and stunts. I suspect they filmed the blog about the song before hey learned the general reaction to it, or maybe they’re just loyal to their artists.

I suspect there may be a more elaborate edition of Spectre eventually because there is certainly more to say about it, especially about where it fits in the Bond canon at large and the Daniel Craig films on a micro level. But they haven’t revisited Skyfall since 2012, even in the latest Bond series collection. If this is the last word, the movie speaks for itself.