Sundance Interview: Babak Anvari on Under the Shadow

The Sundance horror film Under the Shadow has a different twist on a ghost story. Since it is set in late ‘80s Iran, after the cultural revolution, a ghost may be the least of one woman’s horrors. Single mother Shideh (Narges Rashidi) finds herself plagued by the Djinn, but when she tries to get away, the oppressive patriarchal society make it clear she may be better off with the Djinn.

I got to meet Anvari at Sundance after his film premiered in the Park City at Midnight section. He shared stories with me about growing up in Tehran and becoming a filmmaker in England. Look for Under the Shadow soon.

Nerd Report: Are the Djinn a real legend in Iran?

Babak Anvari: Yes, they are. Basically Djinn are very popular mythology all across the middle east. All those Middle Eastern countries have their own take on the myth. So it’s very popular. It’s kind of basically like demons in the west, or like poltergeist but I would say more like demons.

Nerd Report: Had you had a dream to bring the Djinn to film for a long time?

Babak Anvari: To be honest with you, no, not really. The idea for this came quite quickly. Right after coming up with the idea, I started writing it.

Nerd Report: In American horror movies we always say, “Just get out of the house!” Was it interesting to have social reasons why she couldn’t leave the house?

Babak Anvari: Yeah, because I always have that problem. “Why aren’t you leaving the house?” For me, the good thing is that I had reasons for her why. When she finally thinks, “I should get the hell out of here,” she starts feeling guilty, thinking that maybe the missing doll needs to be found. Her daughter manipulates her as well, like, “Please, we should find the doll.” Then she goes, “Fine, okay, just this one last thing, find the doll and then I’m going to leave.”

Nerd Report: But even getting caught outside without a burka could be worse than getting haunted by a ghost.

Babak Anvari: Exactly, it’s like out of the frying pan into the fire, that moment when she runs away but gets stopped by the Revolution guards.

Nerd Report: What was your background in filmmaking?

Babak Anvari: I went to film school at University of Westminster in London. Since childhood, I wanted to become a filmmaker, like since I was a 10 or 11-year-old. Finally I got into film school, studied film and after I graduated, started doing jobs in film and television in London. At the same time, I was doing short films of mine and the last short film I did before Under the Shadow was quite successful. It went to festivals and got nominated for BAFTA. Off the back of that, I got to do Under the Shadow and get signed with an agency.

Nerd Report: Were you always interested in telling stories about Iran or the Cultural Revolution?

Babak Anvari: To be fair, it’s obviously part of me because I was born there and I grew up there, so yes. I wouldn’t necessarily want to always tell stories about Iran but for this story, it just made total sense. The setting for it, because it was ‘80s Tehran and such an intense time with the war and post Revolution, it was just a great setting. Also not many people know about that side of Iran and what was happening back in the ‘80s so I thought it was a great setting for horror and psychological thriller.

Nerd Report: Were there a lot of women in your life that gave you a background on the feelings of women during that time?

Babak Anvari: Yeah, definitely. My mom and both grandmothers, my aunts. Iranian women are very strong. Even though they’re sort of oppressed or have limitations, they always fight back so that was my source of inspiration.

Nerd Report: Was the real fear of a woman at that time that her loved ones are turning on her? Like the Djinn uses her husband against her.

Babak Anvari: Exactly. For me, the main character, all of the horror she’s facing is just basically the amalgamation of all her shortcomings really and insecurities and paranoia. That’s exactly it. That’s why the Djinn always took form in that way, to disturb her.

Nerd Report: It’s not even shortcomings, it’s how society is trying to hold her back.

Nerd Report: How did you find Narges Rashidi?

Babak Anvari: Basically, just looking around everywhere to find someone who’s very talented and also speaks Farsi fluently, because I was very adamant to make the film in Farsi. Navid Negahban who plays Abu Nazir in Homeland, great actor, he was the one who recommended Narges Rashidi to us.

Nerd Report: Did you write the script in English or Farsi?

Babak Anvari: Both basically. I started writing it in Farsi and then translated it into English because I was trying to find producer in the U.K. So they had to read it in English. During the development process with the producers as well, any changes, I had to go back to the Farsi version. It was kind of great because it forced me to do draft after draft after draft, because I had to always translate the text back and forth.

Nerd Report: What horror movies did you get in Tehran?

Babak Anvari: Loads. People love films. Iranians are cinema lovers so now obviously a VCR is not illegal to have, but in the ‘80s it was. Still, that didn’t stop people. We secretly had bootleg copies of films, passing it around. I’ll watch every genre but horror per se, people love to watch horror films in Iran I think but Iranian filmmakers don’t necessarily tend to go make horror films. I thought it was exciting to do something.

Nerd Report: Give me some titles. What were you watching on VHS?

Babak Anvari: In the ‘80s, loads. I remember one of the early films I’d watch was Nosferatu. I used to love that as a child. Rosemary’s Baby was a huge influence on me, a huge influence on this film. It really freaked me out as a child. The original The Haunting by Robert Wise, the 1963 version. Jaws because you can say that’s a horror movie. I’m obsessed with Spielberg.

Nerd Report: Do you have other ideas for horror movies or was this the one?

Babak Anvari: At this stage, I’m working on a few ideas, more like thriller rather than horror but also reading a lot of different material. I’d love to maybe at some stage come back to the horror genre but I don’t know if it’s going to be now or later. I love to show a bit of variety as well. 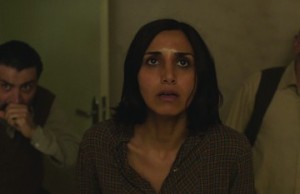 Nerd Report: What do you make of Sundance?

Babak Anvari: From the very first moment I wanted to become a filmmaker, decided this was what I want to do, my dream was to come to Sundance. I was like, “One day I want to come to Sundance.” So it’s just so amazing to have my first feature premiere here. It’s such a great honor. It’s a dream come true.

Nerd Report: Have you gotten to see other films while you’re here?

Babak Anvari: Not yet. It’s been so busy, exciting but busy. That’s the thing. I love to get to watch films. I’m at the Sundance Film Festival. I want to watch films, so hopefully later in the week when things calm down a bit.

Nerd Report: How did you come up with the design of the Djinn and who did the visual effects?

Babak Anvari: Basically, I definitely didn’t want it to look too CG. I wanted to do most of them in camera so it’s tangible and real looking. My DP, Kit Fraser, and I did a lot of experiments, like how to approach the VFX. Half of it was in camera effects or design effects, and after we finished filming, when we came back to the U.K., we got a VFX company called Outpost who got involved and enhanced it. I would say half of it was practical in camera effects and the other half was post work. One thing that was very important for me is that even if you’re doing post work CG, at least get the elements in camera, like real references so that later on they can use them as reference to build the VFX.

Nerd Report: Does practical mean there’s something under a blanket rising up and making a shape?

Nerd Report: Do you hope to see people dressing as the Djinn for Halloween?

Babak Anvari: I’d love to, that would be great. If somebody dressed up as the Djinn in my film, that’s like yes, I did it, I had that influence. 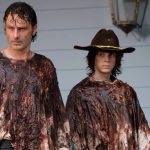 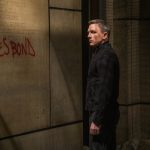