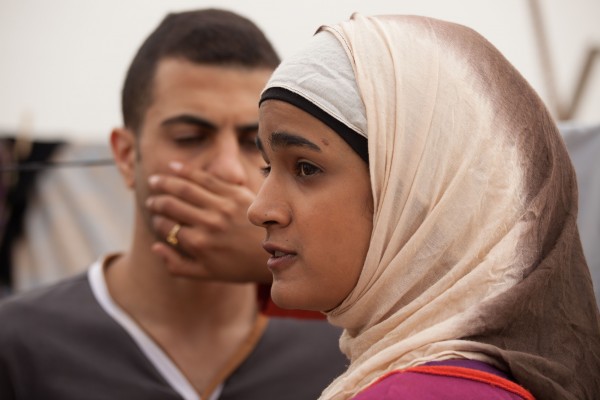 The Israeli film Sand Storm won the Sundance Film Festival Jury Prize for the World Cinema Competition. Good thing I got to interview the film’s director, Elite Zexer, and star Lamis Ammar, In Park City after the premiere of their film.

At a Bedouin wedding, a woman (Ruba Blal) must host her husband (Hitham Omari)’s wedding to a younger woman. Meanwhile, her daughter Layla (Ammar) is having a secret, forbidden relationship with a boy (Jalal Masrwa) from school and tries to stop it.

Nerd Report: What has it been like to come to Sundance and see the reaction?

Elite Zexer: It’s been amazing. We had a lot of good feedback and a lot of love from the audience. People are stopping us in the streets and telling us how much they love the film. We couldn’t have hoped for better. It’s such a lovely crowd here. We’re really, really happy to have this opportunity to show the film for the firs time.

Nerd Report: How personal was this film for both of you?

Elite Zexer: It’s been personal to me. I wrote the film because 10 years ago, my mother is a still photographer and she started shooting in Bedouin villages and became very, very attached to some of the Bedouin women. She asked me to come and join her and meet them. I went through a very important adventure for me there, which was that I was escorting a young women in a situation that’s very much like my film. It made me very emotional and I became very, very attached to this story and said that I have to make this film. It’s been going on for eight years. Rewriting and rewriting and rewriting with them the stories. Of course, when you write it’s also a little bit about you because you can’t write anywhere else, but I’m trying to do it as much as I can from their perspective, their way of seeing the world and their reality, because it is about them. In that sense, it’s like an adventure of me and my mom, which is not a surprise why it’s in the end a story about a mother and daughter. I am trying to do it as much as I can about their way of seeing.

Nerd Report: Was your mom here for the premiere?

Elite Zexer: No, but I’m screening in Berlin and she will be there.

Nerd Report: Lamis, at what point in the eight year journey did you become involved?

Lamis Ammar: At the time of the casting, we did auditions. Actually, I did a lot of auditions to this movie specifically. When I read this script, I was so interested to read the Bedouin story from another point of view with a spotlight on the feminine aspect. For me, it was very interesting and challenging to do something that I can represent this Bedouin woman. Of course they are part of my culture, not exactly, but my nation. We have differences, as you know. We live also in different places. For me, it was interesting to go and meet these people and to know them more deeply and to speak to them, to know their difficulties and their way of life. So it was interesting. I tried to do my best in this role. It was a very big process for me to act in this movie because we got to know them. I learned the accent. It’s Arabic but it’s a different accent. I always wanted to know this accent, so I was talking in it in daily life. It was so funny because my boyfriend liked the accent. He thought it’s sexy. We studied the accent and we did a lot of rehearsals.

Nerd Report: How does Elite direct you?

Lamis Ammar: She knew exactly what she wanted, so it was very comfortable for me to work with her, because I know she knows what she wants and what she’s doing. So I trusted her and it’s a very important thing that should be between the actors and the director. There was trust between us and we learned a lot together. Also after the shooting, we were meeting all the time because we had a good relationship with each other. It was interesting. It was very interesting to work with her. I learned a lot also. I usually work in the theater and it was my first feature movie. Also when I saw the result yesterday, I knew I was right to trust her. I wasn’t disappointed at all.

Nerd Report: How did it feel to be on the set and hear these actors speaking your words, after eight years?

Elite Zexer: I don’t think I felt them speaking my words. I think I felt we worked together. It was a democracy during the rehearsals. We started each rehearsal asking what is this scene about? What are you talking about? Where is each sentence coming from? What’s going on here? What are you trying to get? Why are you saying this? What’s your internal thoughts? What is your game? Where are you coming from? It was a discussion. It wasn’t me telling them. It was all questions.

Lamis Ammar: It was also deep discussion. I shared with her a lot of my own private stories.

Lamis Ammar: I think both. I will do both. I studied theater at university. That’s where I started in it. This is, as I said, my first movie and it was interesting really for me. I think I will keep doing this.

Nerd Report: Would the tense scenes way on the actors and crew?

Elite Zexer: I think my most memorable moment in that sense was after the first take of the mother, when she yells at the father in the living room, and she cries. She hugged him and stayed that way for about 10 minutes until we were ready to reshoot it. They just stood in the middle of the living room and they were just hugging. She recharged her energies through that, but it was a really, really lovely moment. It was always like that.

Nerd Report: Are the loving scenes just as challenging to create?

Lamis Ammar: I think I have a good imagination. I always use that when I’m working with anyone. I try to see the beautiful things in the person and there are always beautiful things in each one, so I concentrate on these things. The love comes with it. It’s very easy for me to love another person.

Nerd Report: How long did you know the actor who played your boyfriend?

Elite Zexer: I had them texting each other so they would develop some sort of relationship before that. Also with Bedouins, most of their relationship is through texts and phones because they don’t get to see each other much. I wanted them to sense how it would be to get to know each other through that.