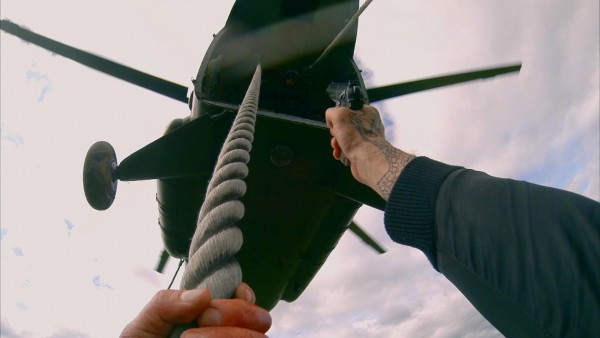 Since moviemaking technology has advanced, filmmakers have been attempting new techniques to engage the audience. I think a philosophical mistake has been to make movies approximate real life more, whether with 3D picture or more chaotic cinematography. Movies aren’t supposed to look like real life. The camera is not our eyes. The camera is a tool for deciding what our eyes should be seeing. So the filmmakers behind Hardcore Henry, an entirely first person action movie, have perfected that. They used the device of a supposedly accurate point of view to push the bounds of fantasy far beyond traditional cinematography.

Henry waked up to find his wife Estelle (Haley Bennett) installing his new hand and foot.  He’s some form of technological cyborg but the bad guys, led by Akan (Danila Kozlovsky) break into the lab. Henry escapes but Akan kidnaps Estelle. On the run through Russia, Henry fends of Akan’s men and gets further instruction from Jimmy (Sharlto Copley).

Since this is the first movie of its kind (no other first person movie has this level of action), the technique has many levels to analyze. The first important component is that it would still be awesome if it were a traditionally shot chase movie. There’d be crazy violence and a fun twist on the generic mad scientist/supersoldier plot. If it only existed for the technique, it wouldn’t work.

The technique is groundbreaking though. Everything looks different from this angle. Distance in a foot chase looks different, although it’s still impressive they’re running on the rafters of a high bridge. A high fall looks different this way. I was going to say you give up fancy choreography, because Henry just wouldn’t see it from his perspective, but by the end the choreography gets crazier. Director Ilya Naishuller and cinematographers Pasha Kapinos, Vsevolod Kaptur and Fedor Lyass were smart about building it up this way. They actually have to teach us how to view a film in this format, so they give us the basics before they get totally crazy.

It can be challenging to follow Henry’s perspective, but it is a next level exercise in film viewing. You get the gist that he’s doing Parkour and you can see how he progresses through the location, but you’re getting different cues than you would if you observed his body. This gives me more ammunition in my argument against the bogus style of shakycam action, the idea that somehow creating disorienting footage is a simulation of being in the action. It’s not, because being jostled doesn’t look like a camera being jostled. Again, cameras are not eyes. That theory also confuses aesthetics, because if the camera is pointing at the people in action, why would the camera be shaking? The camera in that situation is an omniscient third eye.

Another signal that the filmmakers are using a pseudo-first person perspective to create an intentional nonreality is the fact that there are cuts. Not just cuts from scene to scene, but within scenes there are cuts to different darting glances Henry makes. They’re already doing first person. There’d be no reason to try to claim it’s all one take too, and there’s no need to see pedantic shots like walking to a car. Just cut to the driving scene.

I love the crazy logic of Hardcore Henry. I always want movies to be less realistic and more outrageous, especially action movies. There’s a car chase that I wonder if it will be too much for the Fast and the Furious audience who thought Dom catching Letty mid air was too much. With Hardcore Henry, there’s no time to argue its logic because we’re processing it as fast as he can see it. So okay, he’s gone from there to there? Could that happen? I don’t know, he’s already gone somewhere else! The logic is “because it’s awesome.”

Other filmmakers may experiment with this form later and they may find even smoother ways to convey the perspective, but it will only be because these pioneers did the heavy lifting of figuring it out in the first place. These are new rules for following visual language and Hardcore Henry is our first lesson.