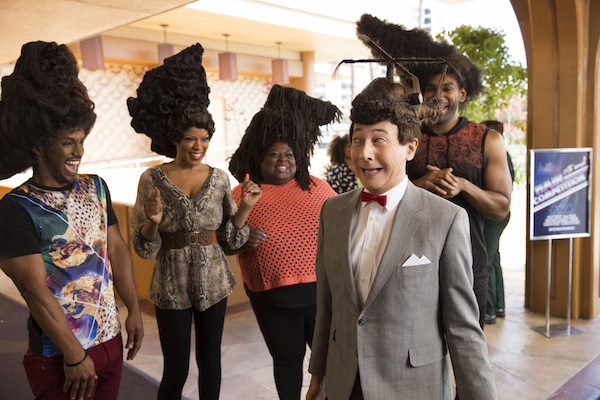 Pee-wee’s Big Holiday is the first Netflix original movie that looks like it’s just a TV movie. Beasts of No Nation was of course an Oscar contender of prestigious quality, and The Ridiculous Six was a huge, sprawling epic with more visual effects than most of Adam Sandler’s high concept movies, and it was a western! Crouching Tiger, Hidden Dragon: Sword of Destiny was a theatrical quality Hong Kong movie, but the long-awaited Pee-wee movie feels scraped together.

Franchise Fred does approve of returning to the structure of Pee-wee’s Big Adventure, down to an opening evocative of the original’s Tour de France and a Rube Goldberg contraption of Pee-wee’s daily routine. Pee-wee is once again inspired to leave his home for a road trip, although there’s no theft this time. If Pee-wee has never left Fairfield, this is not in canon with Big Adventure, yet it clearly follows the Pee-wee model.

Right away, Big Holiday shows signs of cost and corner cutting. The streets of Pee-wee’s home of Fairview are mostly empty, because they can’t afford to litter them with extras. The entire movie is shot in medium wide shots, or maybe over the shoulder close-ups of dialogue, because they don’t have time for any more than the basic setups.   Yet even TV shows now feel bigger, like Fargo and Breaking Bad, so it’s not even a limitation of the medium. His final destination is big and you can feel how much the film comes alive just because Pee-wee is performing in front of people.

But Pee-wee Herman could make one playhouse feel like a magical whimsical world. Budgetary and practical restrictions shouldn’t hold him back. He could make fun of the limitations and turn the restrictions into part of his world. There is one funny joke about a miniature. If you don’t have the resources to create a big world, Pee-wee gives you an angle to make it surreal or blatantly artificial. They should have embraced that.

There are some bright spots. Joe Manganiello is fantastic doing schtick with Pee-wee. Pee-wee’s encounters on the road are endearing. Some are variations on things that happened in Big Adventure too and others are completely new. Pee-wee does one bit with a balloon that unfolds in one long take, and it’s a brilliant bit of Paul Reubens performing.

I guess Franchise Fred should be careful what he wishes for. I want a sequel to everything but now there are ways to make a sequel that’s not really in the same league. Streaming services will be happy to produce a Joe Dirt 2 as long as it’s inexpensive and episodic, but for a series that began with the vision of Tim Burton and Paul Reubens, that’s not really the sequel we’re asking for. But then you have Universal Soldier or Undisputed which produced their franchise bests with limited resources, so it can be done. They tried taking it to studios for years so maybe this is the place left for Pee-wee. If Netflix will let Reubens make his dark Pee-wee movie, maybe it’ll be worth the compromise but it’s not quite enough for Big Holiday.