This is why I love movies.  A crew of thousands spent a year prepping and filming these stunts. A few professionals trained for decades to be able to accomplish them, all to put on a show for me for two hours. The fact that it’s still Point Break makes it both relevant and nostalgic. 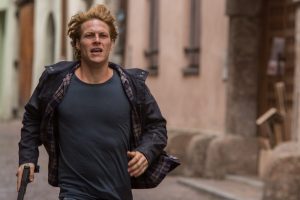 It’s a new Johnny Utah (Luke Bracey) for whom the name is not a source of pride but rather guilt. His experience does give him some insight into a series of crimes involving extreme stunts, and when I say extreme I mean it. This Point Break is extreme! So Utah goes undercover and discovers Bodhi (Edgar Ramirez)’s gang is not committing crimes to fund their extravagant adventures. Their mission has more noble, and socially relevant aims, but still involves thieving, destruction and public endangerment. 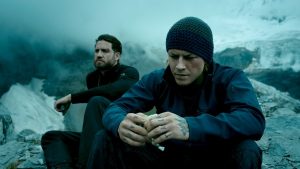 Bodhi and Johnny Utah share a moment in an extreme location

The reason to do Point Break now is to do every extreme sport that’s been invented since the original Point Break. But, you don’t want to just watch a Warren Miller movie. Ericson Core, his own DP, shoots the extreme scenes with a beginning, middle and end so they are extensions of the plot and characters. He also shoots them clearly so we can actually see all the awesome stuff his performers can do. A gunfight and a fistfight are filmed with a shakier camera, but still much clearer than the unfortunate style of modern action movies.

You begin to realize that as epic as the international locations of Point Break are, the extreme action scenes are really intimate between two men. Bodhi and Utah are often the only people in the scene, and even with the rest of Bodhi’s gang the focus is on the two heroes. And still, four characters is pretty intimate for a big action movie. I think it speaks to the way Bodhi’s philosophy, and the sheer nature of pushing yourself to the limit, makes the clutter of the world disappear. 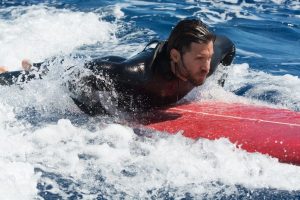 The new story is full of surprises and relevant themes of the modern FBI and social activism. Where Point Break does pay homage to the original, it’s only the things you would insist be included. Anything that was a stretch in the original may still be a stretch, but you know my attitude. “Because it’s awesome” trumps any lapse in logic. Being awesome is always better than making sense.

A few big reveals may be a tad ungraceful, and some backstory is just plain blurted out, but sometimes people just talk, you know. People are narcissistic, they like to overshare. We definitely did not need a line explaining what a point break is. That was better left ambiguous. 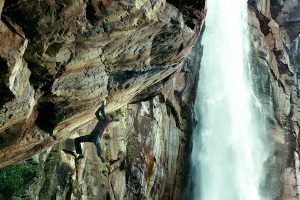 Aside from the exciting, clear photography, the stylistic choice to hold back on the colors seems to downplay the majestic locations in which they filmed. I’m so on board with the rest of the creative decisions I’m going with it.

My hope is that what this Point Break can do is give us the further adventures of Johnny Utah. Hopefully we don’t have to wait another 24 years for them to invent more extreme sports crimes. I want more Point Break now!

I still wish Core had embraced the colors of his epic locations, but we still get to see all the detail in the motocross tracks in the sand, the textures of the rocks on all the mountains, the layers of the wave curl, the mist of Angel Falls and its bronze rapids below. You can’t beat that night photography on the water.

I liked the deleted scenes. There are more with Utah and Pappas (Ray Winstone) which was an important relationship in the original. There’s even an additional action scene. You didn’t think they’d forget skateboarding, did you?

I wish the behind the scenes features had gone a little more in depth. All we have are four short two-minute briefs on some of the key stunt sequences. That’s just enough to introduce the real athletes and show their prep work. At least we get to own the extreme new Point Break at home now!