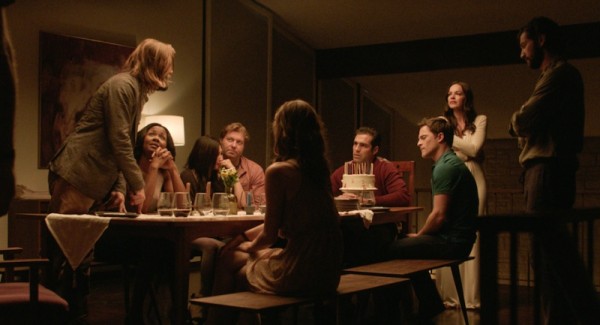 Dinner gets a little heated in The Invitation

Back at Fantastic Fest, I reviewed the horror film The Invitation and loved the way it made social pressures the horror. I also got to have a great conversation with director Karyn Kusama and co-writer Phil Hay. Now that the film is coming out in theaters this Friday, I can present you the spoiler-free conversation with them.

Will (Logan Marshall-Green) attends a dinner party for his ex-wife Eden (Tammy Blanchard) and her new husband David (Michael Huisman). Other friends join them, but when Eden and David share their new belief, most of the friends want to humor them to get through the dinner. Will suspects something more sinister in their plans.

Nerd Report: Is this sort of social pressure the scariest thing of all?

Karyn Kusama: Is it social pressure or is it social obligation? I guess you’re right. Part of what’s really scary about the movie is our desire to not make waves.

Phil Hay: It’s how dangerous it is to be really, really polite.

Nerd Report: Obligation to attend and support the friends, but pressure to listen to what they’re selling.

Karyn Kusama: Oh, sure. Yes, I hear what you mean. Particularly of the group of characters that we’re depicting, I think everyone wants to see themselves as pretty hip, pretty liberal.

Phil Hay: Willing to go with it.

Karyn Kusama: Pretty openminded, willing to give everybody their own space, their own belief systems, not judging. I think that’s a wonderful ideal to work towards but in this particular social situation, it’s a really challenging ideal to uphold.

Phil Hay: We were talking a little bit about how with this particular group of people, the thing they keep coming back to is the worst thing they can say about you is, “You seem really distant.” That’s the greatest sin, but in fact sometimes those boundaries are what protect you.

Nerd Report: Maybe this is the line that David crosses. I can be happy for you that you found something that works for you, but at what point do you need to enforce it on me? Why isn’t just enough that it works for you?

Karyn Kusama: Yes, and you bring up a really good point which is in some way one of the core tenets that we were exploring with the movie which is why do we feel we can make decisions about other people based on our beliefs? What makes us think we know any better other than the gargantuan task of just simply knowing ourselves? Why do we make decisions for other people?

Phil Hay: What’s the need to extend whatever it is that works for us to other people in an obligation way? Like they are obliged to do it just the way you’re doing it. I think I can safely say that’s wrong but it also is pervasive all the time. You can certainly see why these people feel that they’ve found something transcendent or amazing and they want to share it. Why wouldn’t you want that?

Nerd Report: I always remember the Gandhi quote, “Be the change you want to see in the world.” That means living it is enough. The point where you’re trying to make other people live like you, you’re not being it anymore.

Phil Hay: Maybe it’s a sign that the thing you’re doing has some flaws if you need that reinforcement. I think the group they’re in needs everyone to be telling them over and over again that what they’re doing is right.

Nerd Report: Does it actually betray the insecurity of the matter? If you were really confident in it, it wouldn’t bother you that someone else didn’t get it.

Karyn Kusama: Yeah, and I think kind of at the heart of the belief system that we’re talking about that’s getting introduced to this dinner party, it’s about freeing yourself or escaping pain. I think there’s a human, and something I empathize with, in that desire to escape pain, but ultimately I don’t think you can win. You can’t escape pain. That’s sort of like saying I can get outside of my humanness. Once we step outside of that, I think that’s when the sh*t really hits the fan.

Nerd Report: And people’s conviction in that is terrifying, isn’t it?

Karyn Kusama: Totally, conviction can be so scary.

Nerd Report: Except Will is a man of conviction too. Is that why we’re on his side?

Karyn Kusama: Were you on his side while you were watching it?

Nerd Report: I was. I respected his conviction.

Phil Hay: Whether it’s been a conscious choice or not all the time, he’s chosen the hard way. Eden’s way is its own thing and it’s a way he can’t take. There is something about Will. He is, every day, facing reality and that is his cross to bear because there’s a lot of other things that he could do that maybe would make him feel a little bit better or a little bit in the moment, but I think in a weird way our movie is the story of this guy who’s just drawn, he has to be there for this experience because he has to face things. This is the journey he’s on and he has to see it through.

Nerd Report: It’s great that we’re talking about needing more women behind the scenes and in the stories. Could this have been switched where the Will character was a grieving wife visiting her ex-husband?

Karyn Kusama: I think that would’ve been a really interesting movie as well. For me, what I really responded to, and this probably has something to do with my own imbalance between feminine and masculine energies in myself, I responded to Will’s desire to keep things under control. Whether that’s a male or female trait, I’m not sure, but I felt like it was housed really believably in a male character. A guy who wants to seem like he’s keeping it together, but what you’re watching is he’s not keeping it together. There’s something a little bit unpleasant for people about seeing a guy who can’t emotionally keep it together. I just sympathize terribly with that. In a way, you bring up a really interesting question.

Phil Hay: I think there is another movie that could totally be made that way. I’m trying to think, in a way, what the architecture of the choices were. I think one of them was too that Eden, to us, represented a really specific kind of California, regal royalty, feminine royalty. That character really lodged in our brains as that kind of person who’s floating across the room, but underneath there’s a storm going on.

Nerd Report: Michelle Rodriguez always talks about the masculine and feminine in the same body. Was that something you talked about while making Girlfight?

Karyn Kusama: Oh, for sure. That had to be out on the table.

Nerd Report: Did it come from her or you?

Karyn Kusama: I think the notion of that intellectually was probably something I put words to that she was like, “Ah, I get that. Let’s talk about that.” But she lives that sort of dichotomy day to day. She’s a tremendously gender fluid person in some interesting ways so she’s a true original.

Nerd Report: Was The Invitation back to the indie feel of Girlfight?

Karyn Kusama: Yes, absolutely and I’m really happy I got to re-enter that space. I like living there.

Nerd Report: Is it different now that in the last 15 years, so many others have entered that space?

Karyn Kusama: Yes, yes, that’s true. It is different in that I think if anything, the budgets have dropped even lower which is, I’m not going to lie, I don’t necessarily think that’s a great thing for film in the long run. I think there needs to be resources toward this kind of storytelling. It becomes a kind of “everybody wants everything for free” kind of mental ghetto.

Nerd Report: In my industry too.

Karyn Kusama: Yes, and everybody wants everything for free. It’s an attitude about the nature of work and the nature of creativity in general, culturally. For that reason, I do feel like there’s a call to arms among filmmakers and people who work in this field to try to find ways to pay our peers and colleagues because they deserve it.

Nerd Report: I’ve even heard that since you can’t make money on a film anymore, you make the film so you can sell T-shirts and memorabilia for it.

Nerd Report: But they still sell albums and downloads and concert tickets. If I were a filmmaker and they said you can’t get paid for making the film, but you’ll make money on the T-shirts, I’d say, “I don’t want to be in the T-shirt business.”

Karyn Kusama: [Laughs] Totally. I would not be good at making T-shirts, let’s just put it that way.

Phil Hay: I feel like we talk about this a lot. Matt [Manfredi] and I work in the studio world a lot. That’s what we mainly do and fortunately for us, we just happen to click with a certain type of studio movie, many different types. That’s just part of who we are. I do think it’s really important that, what people don’t realize, and this goes for your business too, you have to incentivize people who are good at what they do to stay in that business. We lose if people drop out of writing about film, making films, all that stuff.

Karyn Kusama: Of course, because everyone expects it to be done for free.

Phil Hay: That’s in all of our interests to make sure that happens.

Nerd Report: No one’s going to buy a T-shirt of a journalist anyway so that’s not even on the table for me.

Karyn Kusama: I don’t know. Frederick Topel, I might wear that proudly.

Nerd Report: Since you agree you don’t want to be in the T-shirt business…

Phil Hay: I’m not saying no.

Nerd Report: What is the call to arms solution?

Karyn Kusama: What’s the alternative? I think the next thing has to be with as many people who want to see movies in theaters going to see movies in theaters and seeking out the movies that maybe are five extra miles away from your house. Sometimes you have to seek out work and show your belief system with your dollars and say, “I’m willing to explore this smaller movie farther down the road.”

Phil Hay: We’re very fortunate to be with Drafthouse for release who are the people in this business who work so hard to drive people to the movies and make it an experience that is incredibly special.

Nerd Report: It has to be theaters though, so studios see the box office? What about VOD?

Karyn Kusama: VOD is a wonderful other sort of component.

Phil Hay: And it’s helping people see how they can pay for [these kinds of movies]. I think it’s exciting.