The Conjuring 2 is two hours and 11 minutes long. That’s a whole lotta conjuring! It’s fun to see director/co-writer James Wan really get to indulge every aspect of supernatural horror he wants. 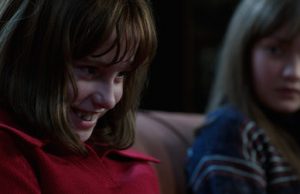 After investigating Amityville, Ed and Lorraine Warren (Patrick Wilson and Vera Farmiga) plan to retire. Yet Lorraine keeps having visions connected to a family in Enfield, England. We spend most of the first hour of the film with he Hodgsons as they experience hauntings by the ghost of Bill Wilkins. It’s the church who flies the Warrens to London to help, where their earlier visions pay off.

This is a different sort of haunting than we saw in The Conjuring. In the Perron case, the mother was possessed and the film explored all of the scary manifestations that could come with that. A poltergeist is even more destructive, and the film takes time to delve into every which way he can terrorize the Hodgsons. 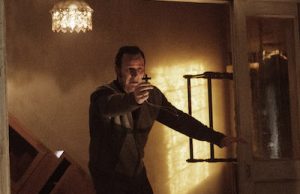 Wan shoots the poltergeist scenes elegantly with long, flowing tracking shots, some which even include a time jump to the following morning. This may be Wan’s most ambitious camerawork, taking advantage of the long halls of the Hodgson house and having multiple parties crossing in different directions in a single shot.

He really has luxurious time to play with the haunting scenes. Some are familiar scenarios like doors and windows slamming, music and televisions turning on by themselves, and inanimate objects moving on their own. He can deliver traditional scares to the maximum effect, thus laying the groundwork for the true misdirects. He gives us a unique portrayal of the Amityville case, which we’ve seen many times before, and constructs a finale with all the images we’ve seen throughout the extended haunting. 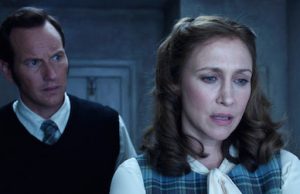 At the film’s heart remains the relationship of Ed and Lorraine. They love each other and whether you believe in their power or not, you can buy the film taking their power seriously. Ed’s concern for his wife is sincere, so when she says her premonitions are warning her away from this case, that’s as valid as any mundane spousal discussion.

The Conjuring 2 has a stronger thread of skepticism, which adds a second layer of mystery to the investigation. I didn’t really expect the second Conjuring movie to turn out to be a hoax, but it is a clever way of incorporating relevant skepticism. It adds an additional danger to the Warrens. They could be defeated by Bill Wilkins or brought down by a clever fraud, and they have to behave as if either is a reasonable threat. 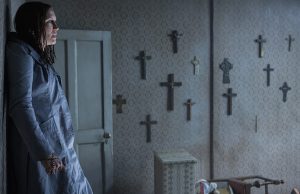 The Conjuring 2 premieres at the Los Angeles Film Festival on Tuesday, June 7 at 7:30 PM. See is first there, or everywhere June 10.