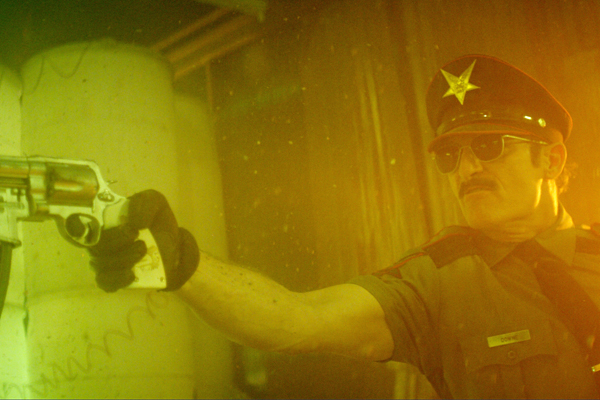 Officer Downe lost me immediately at the Orgasm Counter, which is in the second scene of the movie. That is such a male fantasy about sexual prowess, that the counter goes into double digits, I knew this was going to be rough.

This is what a Troma movie might be like with misogyny and entitlement in place of vision and actually having something to say. I was going to say it’s like someone under the bad influence of the Crank movies without those films’ inspiration and spirit, but one of the Crank guys produced this. Maybe he’s responsible for the more questionable parts of the Crank aesthetic without his partner to ground it in absurdity and creativity.

The premise is Officer Downe (Kim Coates) is a zombie supercop who the LAPD brings back from the dead every time he gets killed in the line of duty. They pair rookie Officer Gable (Tyler Ross) with Downe.

One positive I can say is Coates seems to get the tone this movie should have. He commits and is professional enough to get the deadpan gravitas needed to pull this off, even if the filmmakers don’t.

The premise doesn’t even really matter as the film is so full of its own style it only wants to screw around. Outdated meta jokes include trading subtitles for out of sync dubbing. There’s a reason it’s been over a decade since films have made Kung Fu dubbing jokes.

The hormonal pubescent attitude continues with a series of blow job jokes, as if a woman popping up from below frame is the most hilarious thing ever. Maybe these guys are just trying to Secret a blow job and this movie is their vision board. Nuns with cleavage are the sort of thing that call attention to “look how subversive we are! Nuns aren’t supposed to be sexualized at all, but we gave her big tits!” The orgasm counter returns to bring us an even higher number, lest we doubt the filmmakers’ ability to being women to orgasm.

The action is all closeups in shakycam that might be more accurately called vibrocam. There are ridiculous kill shots but they mean nothing in the context of the sequence. You just see extreme gore and bravado and it’s boring. All the tilted low angle shots look like the cinematographer doesn’t understand basic framing. It’s not badass when you’re cutting off the frame. When they point a flashing strobe light directly into the camera, Gaspar Noe is saying, “Too much, guys.”

There are some teleportation visual effects that look expensive. The money would have been better spent on dollies and tripods.

The makers of Officer Downe may have seen films like Hobo with a Shotgun or The Human Centipede and thought they could play too, but those films have something to say, whether you like them or not. All Officer Downe is saying is “look at me!” In the words of many police officers, there’s nothing to see here.