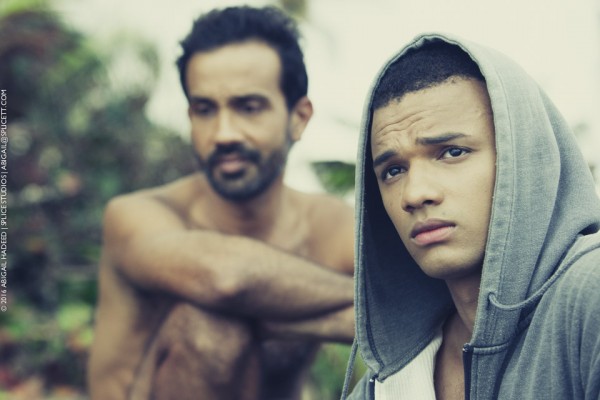 Play the Devil is the kind of movie you get to see at a film festival where you really feel like you’ve been brought into a world you wouldn’t otherwise see, and discover new talent that Hollywood may be overlooking. Hopefully playing at the festival will allow more people to see it.

Gregory (Petrice Jones) is an actor in Trinidad. A wealthy theater fan named James (Gareth Jenkins) approaches Gregory after a performance and they hit it off in a culture where being openly gay is not tolerated. Meanwhile, Gregory’s family struggles and his brother Fayne (Nickolai Salcedo) is a drug dealer.

In the very first scenes of Play the Devil, you are totally in this world. You’ve experienced all segments of society: the wealthy art lover, the middle class trying to get by, and the street where crime is the most lucrative prospect. You also quickly experience the extremes of nature. It’s exotic to those of us who live in cities.

Writer/director Maria Govan presents all of this as a way of life, not an expose. We are witnessing believable characters dealing with pressures of life and society, and they are understandably overwhelmed. Gregory’s relationship with is grandmother (Penelope Spencer) is touching, but not easy. With his friend Dev (Akil Nickolas) they often speak in a dialect which presents subtitles, because it would be too foreign for us to pick up in only 90 minutes, but we get to experience it the way they live it.

Gregory and James bond over photography. It is so human, so gentle. The performances are professional grade. Jones and Jenkins anchor the film in well-intentioned conflict. Nickolas, Spencer and Salcedo all feel like real people. Even as a drug dealer, Salcedo doesn’t play Fayne as a raging criminal. He’s just a guy trying to get by.

I look forward to seeing more from Govan. She has a way of presenting culture as real, but still cinematically stylish. Wait until you see the climactic Jab ceremonial dance. Hopefully this also opens more doors for the Trinidad film industry.