Finding Dory is a compassionate portrait of mental illness for families with young ones. Dory has short term memory loss according to the movies, but really this is the Memento disease. It teaches kids you still have value and can achieve things in life with conditions like this, and could lay the groundwork for families to talk about Alzheimer’s if necessary. It’s also got a Die Hard 2 thing going on. How can the same sh*t happen to the same fish twice??? 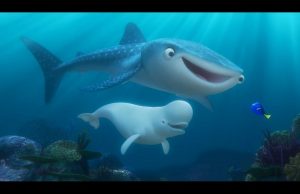 Dory’s memory does require a significant amount of handholding. The movie never questions whether it’s worth it because every human being (or anthropomorphic fish) is worth it. Yes, it sometimes weighs on Marlin but he appreciates all the good dory brings, not the least of which is she helped him get Nemo back. An important parallel to Dory is that everyone adjusts their own memories whether they have a mental disorder or not. Marlin remembers snapping at Dory in a way that justifies his outburst. As a good role model, Marlin accepts his responsibility, and both Nemo and the film acknowledges that it’s ok to get overwhelmed as long as you make it right. 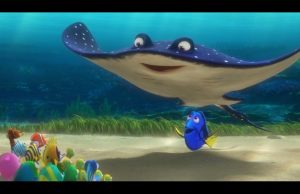 The film balances several different philosophies. Dory’s is spontaneous, because it’s the only way she can be. She is biologically unable to make plans for the future because she will forget them. Characters celebrate Dory’s spontaneity but with the subtext that it’s the best she can do. Marlin especially feels the weight of this because as someone cursed with foresight, he knows exactly what she’s missing, but she’ll never know. Dory is able to get Marlin out of his head a little to see the advantages of new ideas over long held beliefs, but in other cases plans are shown to have come to fruition and cautions should have been heeded. Most of us have the luxury of choosing how much we want to plan and how much we take as it comes, and a balance is healthy. For those with no choice (and one can imagine disorders where it’s impossible to stray from the schedule too), Finding Dory shows there’s still a way for all of us to get along. Its most important message is “there’s always another way,” which means we never have to be stuck.

There’s only one unfortunate scene in which Dory blatantly tells another character that the best things happen by chance. Only people who’ve never accomplished their goals believe that. Narratively it’s consistent, because Dory has never experienced the joy of accomplishing a goal, or if she did she never remembered that it was ever a goal. I hope that isn’t taken out of context as advice to “go with the flow, man” instead of making and following through with plans. You need only look at the voice of Dory to dispute that success happens by chance. I don’t think Degeneres produced two hit shows by going with the flow. Going with the flow is probably what led her to star in Mr. Wrong. 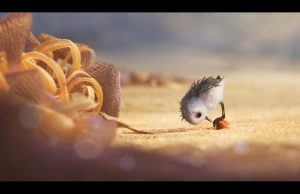 The title Finding Dory may be inaccurate, because they’re actually finding Dory’s parents. It’s still a similar construct and the film is aware of this. Marlin lovingly comments on the recurring events like any reluctant hero should. It is a joy to see these characters again in a new adventure, albeit a similar trek to reunite with missing family.  And Piper from the short film preceding Finding Dory deserves his own feature film, as long as it’s a silent film.