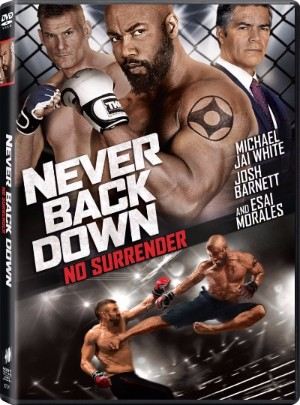 Franchise Fred Review – Never Back Down: No Surrender

Never Back Down: No Surrender has the least backing down yet, although there are still three people in the movie who back down. I guess you need to have somewhere to go for the sequel. A bad guy backs down so that’s something only bad guys do. Will they ever learn? And you still need to see what backing down looks like so you can appreciate the people who never back down.

Writer/director Michael Jai White uses the Never Back Down franchise to say something about the world of fight sports. No Surrender raises issues of drugs in athletics and domestic abuse. Even though the characters are fighting in a made up movie league, not the official UFC, but I’m impressed the movie used its platform to say something substantial and at least give fans some caution about their sport.

Case Walker (White) travels to Thailand to help his friend Brody James (Josh Barnett) train for a fight against Caesar Braga (Nathan Jones). Braga flies into uncontrollable rage at a reporter’s mention of his spousal abuse, so it looks like a scary fight for Brody. Add to that a corrupt fight promoter (Esai Morales) and there are plenty of people to whom you should not back down.

Along the way, Case reluctantly trains some young hopeful fighters at the gym, keeping the youth aspect of the original film but moving further and further away from high school. The training moments are good because they address bruised fists and sore muscles, so it’s not all 36th Chamber of Shaolin to become the best.

JeeJa Yanin plays a supporting role, mostly training in the background of the gym until she shows her stuff in the ring an hour in. At least she fights. Tony Jaa is a pure cameo, hamming it up in a comedy scene. They reuse the entire handcuff fight from Never Back Down 2, rightfully so because it’s awesome, but all the new action in No Surrender is official in the ring fighting. The finale happens in an interesting way to give it more of a street fighting edge.

As progressive as the themes of Never Back Down: No Surrender are, there is an unfortunate homophobic and transphobic joke Case makes. It’s such a throwaway and completely unnecessary joke too, I’m surprised no one suggested they just cut it. Interestingly, in the world of Never Back Down, Quentin “Rampage” Jackson has been arrested. And he appears in a video, so Jackson either shot the video for the film or at least approved the license for an existing video. He must have a good sense of humor.

Never Back Down: No Surrender continues the series with solid fights and a good story of Case Walker. This one has an excellent line when Case tells Brody, “”We need to schedule some time for you to go f*ck yourself.” I will watch this series until I finally get a Never Back Down movie that truly has zero backing down. 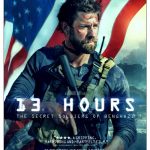 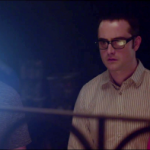 LAFF Interview: Barbara Crampton, Jackson Stewart and the Cast of Beyond the Gates

LAFF Interview: Barbara Crampton, Jackson Stewart and the Cast of Beyond the Gates