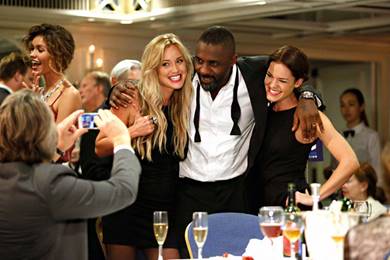 A Hundred Streets is set and filmed in London but it had its world premiere at the Los Angeles Film Festival. The ensemble drama tells three story. Max (Idris Elba) and Emily (Gemma Arteron) play a couple dealing with infidelity. Kingsley (Franz Drameh) is a young gang member who befriends an older man, Terence (Ken Stott). George (Charlie Creed-Miles) and Kathy (Kierston Wareing) are a couple struggling to adopt.

We got to speak with screenwriter and producer Leon Butler, and director Jim O’Hanlon when they were in Los Angeles for the festival.

With the three stories in A Hundred Streets, did you start with one story and branch out?

LB: When I wrote the outline, they were all stories that I had. I wanted to find something without huge coincidence that brought them together. I used the hundred streets, one square mile of London to bring them together. That way they brush past each other. I had about six or seven stories I wanted to make work. Then it was one geographical area that made them all work together. Once I realized I had that, I decided which stories I wanted to tell and made it work from there.

Which was the first one you decided on?

LB: The Kingsley story. That’s based on a young guy I knew. The Terence character, the Ken Stott character, I also knew. He’d always be advising and mentoring me, so I just put them together. That was the very first story that I worked on. Obviously, we’ve got amazing actors in it, Idris, Gemma, Charlie Creed-Miles and Ken Stott, but Kingsley’s the main lead in the film. He’s the star of the film really.

JO: It is very much an ensemble piece and it is three stories with two central characters in each story. What I liked about it, and we tried to capture it from the helicopter shot that goes down into the bridge and sees Kingsley, was that this could have been any six people in London. Frankly, although I hope it’s very specific to London and captures the energy of London and the color of London and the dynamism of living in one of the world’s great cities, it could also be any city in the world. I think this will play and appeal to and resonate with anybody living in anything over a big town. It is about what it’s like to live in the big city, how lonely you can be in the big city, how much opportunity is available and around you. If you can grab it or if you are dreaming and have dreams and want to make them a reality, I want to get all that, make it very specific to London and very specific to our particular characters, but also feel like when we were coming down onto that bridge and we were looking around going, “Hmm, which one will we choose?” Because any of the people on that bridge would have brought us in a different direction and had equally as interesting a story as the characters we happened to pick.

So do you live in London?

JO: I do, so I’m sort of an insider and an outsider. Leon’s more of a Londoner. I’m from Dublin, I’m Irish and I’ve been living there more than 15 years. So I am both now a native Londoner but I still have the outsider’s view of someone who wasn’t born and bred there. I did want it in some ways to be a bit of a love letter to London without being in any way sentimental or glossy or unnuanced if you like. I wanted it to capture the fact that on a beautiful day in Battersea Park, there is no better place in the world. On a day when you’re not feeling as well and it’s lashing rain and you’re stepping over drunks on Holloway Road, you can think to yourself, “What are we doing here?” I wanted to capture both ends of that experience in London and make it as real as possible, as authentic as possible but also give it a cinematic feel and a poetry, so it wasn’t just a gritty, grimy, handheld, dirty London. That’s definitely one part of it and we do look at some of that in the film and we don’t shy away from that aspect of it. But, that’s not all London is. It’s a beautiful city as well.

Living in London for 15 years as a director, could you not help look around and think, “I want to photograph this. This is how I want to shoot this?”

JO: Absolutely. We shot it all in the areas the script is set, in Chelsea and Battersea and on the bridges, the Albert Bridge which can look stunning both by day and by night. The Thames is amazing. You’ve got Battersea Park. You’ve got the streets. You’ve got the estate, which has a very different feel and texture. I wanted to capture all of that and it’s not a part of London, Chelsea, that you really see on screen an awful lot. We tend to be in East London or we’re in the houses of Parliament or you see Notting Hill, the Richard Curtis film. We wanted to capture this one square mile of 100 streets that comes obviously from the poem that Terence quotes in the middle of the film.

Once the cast came on board, would they change the characters or stories at all?

JO: We didn’t have to rewrite much after the actors came on board. Idris and Gemma were on very early and they did a fantastic job. We almost shot it like three short films. The characters brush against one another and their stories very lightly intersect, but there’s no great coincidental “he turns out to be his brother,” none of that sort of coincidence. We shot it almost like three short films and we did Gemma and Idris first, because Gemma was going into theater. So we shot most of their story out. Then I think we did Kingsley and Terence’s story. Then we moved on to George and Kathy’s story. Obviously with a little bit of crossover but it was great because each time we had a set of new characters, they gave a list and an energy and a dynamism to the film as they arrived and we started telling their story. I think the trickiest to find in a way was the Kingsley character, just insofar as he’s 21 but he’s got an old head on young shoulders. He’s a little bit wise beyond his years and someone who’s very much a product of the estate he comes from. He also transcend there. So finding somebody that’s 21 who had that maturity to play that character was very difficult. We initially were looking at people who were a little bit older. Then we thought, “Oh, it’s a pity we can’t find somebody.” Then Franz walked in, 21 years of age, but with the maturity of someone an awful lot older and he just blew us away. Once we had our Kingsley, we were home and dry, you know.

One story does end with the threat of gun violence, which has become an epidemic here in the States. Is it as big a problem in London?

LB: No, it’s rare for guns to be used at all. He was just at the end of his tether. We got a few hints from photographs on the wall that he did some hunting. I’m not sure the statistics, but 100,000 people might have gun licenses for hunting or shooting. It’s very rare that guns be used at all in any crime.

JO: That, in a way, was one of the indicators of where his mind was. It’s a sign of desperation.

Were there any scenes that didn’t make the cut?

LB: We had a three hour assembly. There was a whole storyline that was cut.

JO: There were four stories and it was a great story and I would love to work it up into a 25 minute short film because it was a terrific story and had some fantastic performances and some really wonderful actors in it. It just finally was not in quite the same film as the other three. It was a bit more of a thriller story. It just didn’t have the same sort of emotional weight to it and quite the same nuance of character maybe. I don’t know, it was more of a thriller story and these are three drama stories. We tried to integrate it because we all liked the story and we loved the actors in it. We spent a long time trying to make it work and every time, you felt like you’d gone to a slightly different movie. Not a radically different movie but a slightly different movie. So we had to make the painful decision to cut that at a very late stage in the process, but I do hope you’ll see it one day as a fantastic thriller short film.

Who was cast in that story?

JO: There’s a number of people in it and they were all great. They were fantastic and it really does work on its own. I describe it as if you put the four stories on the wall and said, “Which one is the odd one out?” Everyone would have picked this story as the odd one out. It was a difficult decision to kill our baby but it was one that made the film more cohesive and feel like a more singular vision.

Do we see any remnants of their characters in the complete film?

JO: They’re completely not there at all unfortunately.

Do you have plans to work together again?

LB: We plan to. I’ve written two slightly more genre films, romantic comedies. One is set here, one is in London, as well as a few TV projects, like A Hundred Streets TV treatment.

Would the TV series have other characters in this block?

LB: It’ll be the ones that survive from this and new characters that cross their paths. With a TV series we’ll have six hours. It’ll give us more depth to explore the characters. It’s about the social cleansing or changing London over the last five years, how there are a lot of Chinese, Russian and Middle Eastern people have come into London and the full effects of that. Again, all our characters brush past each other and they’re all based on true stories, but wasn’t the hardest to put together.

Will Franz and other cast appear?

LB: Yeah, indeed he will. 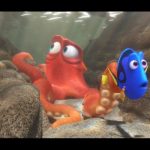 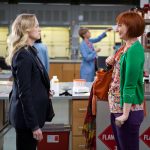