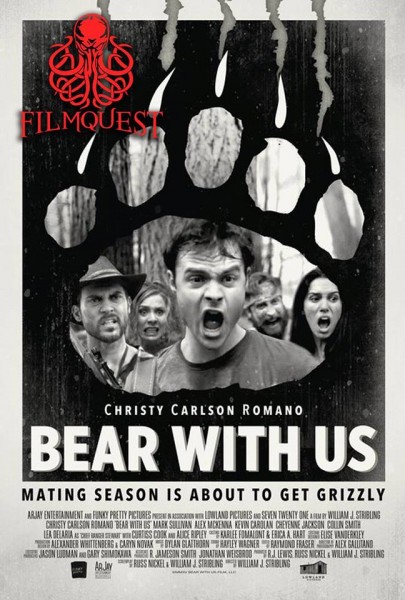 Most low budget filmmakers go out to a cabin in the woods to make a horror movie because it’s inexpensive and scary. Bear With Us used their resources to make an absurd comedy and the ridiculous twist on the format is much appreciated.

Quincy Adams (Christy Carlson Romano) turns down Colin Dense (Mark Sullivan)’s marriage proposal. She’s uncomfortable that Colin puts her on a pedestal, but put on the spot to tell him her flaws, she says she’s afraid of bears. Determined to rid his princess of her one flaw, Colin concocts a plan to take Quincy, her friend Tammy (Alex McKenna) and his friend Harry (Collin Smith) camping so Quincy can hunt a bear and conquer her fears. Hugh Grant ain’t got nothin on this!

Colin is misguided at best, and spoiler alert, he’s not at his best. It works for comedy because he’s oblivious that she’s just not that into him, but she’s too chicken to tell him.

It’s always hard to describe styles of comedy, so I hope irreverently obvious is a good description. From the blatant ominous address mishap to Tammy and Harry giggling at unintended sexual references, Bear With Us has no pretense of being highbrow. Characters take ridiculous situations like an impromptu intervention sincerely, and I appreciate running gags that recur like “when did you have time to…”

I suspect co writers Russ Nickel and William J. Stribling (who also directs) are repentant sufferers of Nice Guy Syndrome. They realize the error of putting women on pedestals, and how it’s not fair to their loved ones either.  I mean, his name is Dense. I think the filmmakers know he’s not the hero. A mature partner knows you can celebrate someone’s flaws but not ignore them. Colin thinks the reason Quincy said no is she can’t accept her perfection, so if only he can show her how perfect she really is…

As such, Bear With Us is decidedly a male perspective on relationships. The women function in light of Colin’s needs and deficits, but I think it’s ok to get this out there. Write what you know. As long as a woman makes her absurd relationship comedy too, we can have both. The actors seem to get it. Tammy is Harry’s dream girl, a drug taking promiscuous enabler. McKenna makes her endearing. Quincy is kind of a bitter ex girlfriend type even tho she can’t pull the trigger on the ex part, but Romano is a good sport and I’m sure it’s a welcome chance for the Kim Possible and Even Stevens star to not play the perfect girl, and show she’s all grown up. It all seems positive. The guys learn perspective.

Then they meet Hudson (Cheyenne Jackson), a hunter in the woods. Jackson gets the rhythm of this uber serious belief in ridiculous dialogue better than anybody. He is an animal with this material.

Stribling and Nickel master the escalation of comedy, yet they can pause for some absurd gravitas too. They even get some shots of a real bear. Whenever it’s really dangerous, they use movie magic to simulate a bear, but I’m impressed with the production value. The widescreen black and white is a nice touch too.

This collection of abrasive characters makes for good comedy, but Bear with Us ultimately makes us empathize with them, even if we’d never ever want to hang out with them. Bravo for such an unflinching take on comedy and using the confined location to pull off a complex world of shenanigans.