Muddy Corman sounds like it could be the plot of an Adam Sandler or Rob Schneider movie, where they have to pull off a crazy scheme to get enough money to keep their school open. Imagine the highbrow approach to that and that’s more like Muddy Corman. 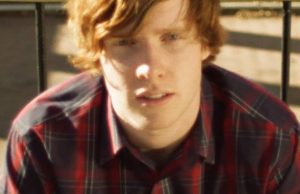 Gavin Porter (Lucas O’Keefe) is a pushover who often gets pressured into mild situations like giving free refills and overpaying for auto repairs. Emmet Brubaker (Kevin Corrigan) recruits Gavin to enroll in the Muddy Corman School of Performing Arts. The catch it, Muddy Corman is failing and Emmet has found a loophole where they can get government funding if they have a football team. So they have to coach a group of art students to play sports.

Muddy Corman is less about slapstick training montages and more about awkward comedy, where Gaving sits there uncomfortably while things happen around him. A character will state something that just happened again and again, making it even more awkward to the people who’ve already witnessed it. But there are some laugh out loud absurdities like a fake celebrity cereal and another fake children’s TV show that could very well have existed in the ‘70s. 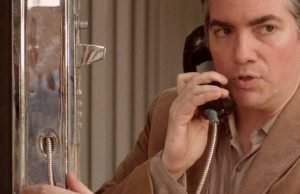 I’m placing Muddy Corman in the ‘70s based on the existence of pay phones, prevalence of rotary phones at home, and the TV sets people watch. It’s never specified, but that sort of retro look gives Muddy Corman a sort of out of body feel. It’s a period piece but not.

Writer/director Jon McDonald and cinematographer Jason Ball have a good eye for framing and camera moves that often are the punchline themselves. Even when Gavin works in a small food stand, they frame him to make it look epic. Rows of lockers, classrooms and Emmet’s sad office are framed elegantly.

It’s too bad there aren’t more training montages, but what we see are funny twists on underdog sports comedies. It all pays off in the big game. Since most of the film is about a whimsical look at the mundane, the big game is a rather shocking moment of big spectacle comedy that stands out even more in contrast. 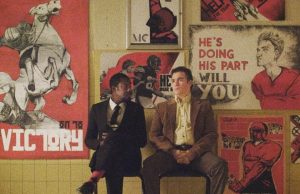 McDonald makes a feature debut with a strong voice. He is instantly one to watch for his next films. O’Keefe in his first screen credit is a revelation. Corrigan is the film’s tonal lynchpin, and celebrities Doug E. Doug and Ellen Greene get to play fun, more absurd characters. Deven Skye is another great find as the intrepid reporter out to get the scoop on the Muddy Corman football team.

People are already comparing Muddy Corman to other indie comedies. Those comparisons are valid and you can see where McDonald takes them in new directions. I hope one day people will be referring to other films as Muddy Corman-esque.