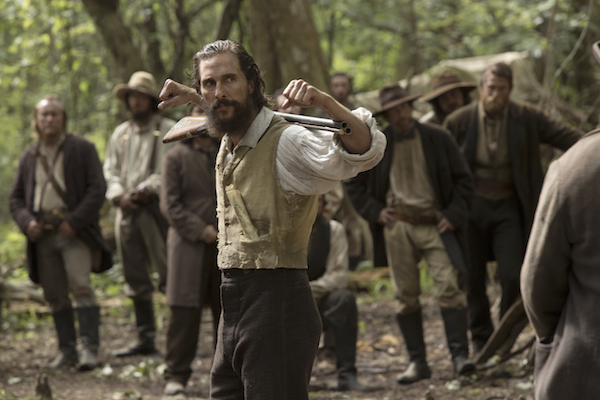 Free State of Jones is a great historical epic that both conveys the escalation of a conflict and tells the human drama of living through that conflict. It covers 14 years which is a sprawling length of time, yet never feels rushed or confusing, and always feels compelling.

Newton Knight (Matthew McConaughey) deserts the Confederate Army after his younger brother is killed. Forced on the run by Confederate collectors, Knight ends up leading a rebellion of escaped slaves and other Mississippi farmers who just don’t want to stand for the Confederate Army taking their stock and crops anymore.

While the trailers understandably make Free State of Jones look like a Braveheart style war movie, it is equal parts political drama. Each component is equally effective. Politically it shows how this begins simply with citizens dealing with war. They are resigned to the hopeless reality, but it’s not heavy handed.

The rebellion starts small. All they want to do is protect their own farm. Then Knight wants to help Moses (Mahershala Ali), a slave he meets in the swamp, and he’s willing to kill whatever small search party comes after them to do it. Even then, it’s not a big enough threat to the Confederate army to warrant attention.

The gradual growth of Knight’s movement speaks to societies that get caught up in bad leadership. For some, the Confederate philosophy was a way of life they would die for. For most, they just happened to live in the south where the Confederacy grew in power. Once their own families are dying, they don’t want to support Confederate policies. We don’t overtly see slave owning families join the cause but the more it grows, you’ve got to assume it’s full of people changing the ways they inherited.

The battle scenes are clear and exciting. The Civil War sequence portrays trench warfare vividly. The battles Knight leads are thrilling and badass, though always responsible to portray the tragedy of losses on both sides. But Knight uses strategy just as well.

Knight knows he has an advantage over the Confederate army as long as he’s camped in the swamp, so he taunts them with visible displays, knowing that they won’t dare enter his territory. Even after the Civil War ends, dirty tricks are alive and well in the South and Knight has to outsmart post-emancipation political maneuvering with peoples’ lives at stake.

Writer/director Gary Ross impeccably distills history into the above narrative. Portions of bigger picture events are summarized with text on screen and historical photographs. You would think that sort of documentary approach could be jarring in a narrative movie but it works. As if the navigation of history weren’t a complex enough puzzle, Ross also introduces a conflict the Knight family faced 85 years later. It’s only a few scenes peppered through the movie, but it feels seamless to visit a future date and it fits perfectly.

Free State of Jones is a harrowing, illuminating portrayal of a time in American history that I frankly did not learn in school. It’s the perfect illustration of how there’s always a fight at every point in history, no matter how much progress we think we’ve made.