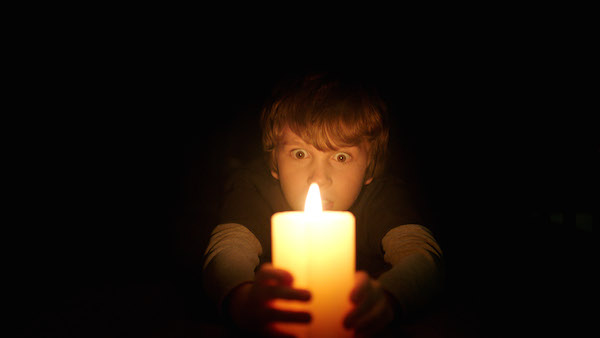 When I saw Lights Out at the Los Angeles Film Festival, I felt like I’d discovered a new voice in both horror and cinema in general. One month later, I got to sit down with director David F. Sandberg and his wife Lotta Losten, who appears in the film and developed the concept with her husband for their original short.

The monster in Lights Out is Diana (Alicia Vela-Bailey), a creature who can only appear in the dark. You’d think it’d be easy to keep the lights on but Diana always finds ways. She’s been plaguing Sophie (Maria Bello) all this time but now she’s moving on to her daughter Rebecca (Teresa Palmer) and son Martin (Gabriel Bateman). Lights Out opens this weekend.

Do horror movies take fear of the dark for granted?

LL: I think when we did the short film, we didn’t know if the concept was big enough. We jus thought it was cool and something we experience often. We thought maybe other people experience as well, but I don’t think we could have known it was going to be such a big thing. Now afterwards, we can really see that everybody all over the world can recognize themselves in this feeling. That’s why it works, because it’s such a universal fear.

DS: People keep saying that. “How come no one thought of this before?”

LL: I think it’s so simple that people don’t think it’s enough, but we tried. We tried with the simple thing and it worked so well. 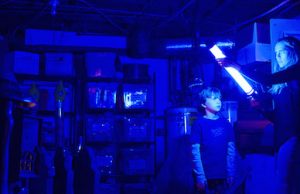 You wrote it with Eric Heisserer. Did you have a list of things you wanted to do with the dark, like car lights, candles, crank flashlights, etc.

DS: That’s exactly the thing. Even before I wrote the treatment of what I wanted the story to be, that was something actually my agents and managers said. “Write down some set pieces.” Okay, so what can we do? Car headlights. We can have gunfire flashing. We can have candlelight. I had this big whole list of things I wanted to do. Not even everything made it into the film.

Did you have more that didn’t make it into the script?

LL: And something that got cut as well, a really great refrigerator scene.

LL: I miss that in the movie.

DS: So if it does well and there’s a sequel, there’s certainly more stuff to do.

Was that last 20 minutes a major portion of the shoot?

DS: Yeah, and it’s the one that I love the most just because that’s where everything happens. The movie turned out to have more stunts and things than I originally intended, but it was just so fun. Alicia is a stunt woman and we had a stunt coordinator who said, “Oh sure, let’s have someone on wires and let’s throw someone off the balcony.” It was just so fun. My original concept for what the feature would be I think was a little bit more arthouse horror because it was really playing into this being an analogy for mental illness. Then as it went on, it became more of a fun, popcorny horror which is not necessarily bad. It was just having fun with it.

How challenging was it to light Diana’s silhouette and keep her in the dark?

DS: Very challenging because I didn’t want to cheat. I had to storyboard all of it just to make sure that she was truly a silhouette. At first I was working with a storyboard artist. He would draw her with a rim light on her and I was like, “No, we can’t shoot it like that because that’s cheating.” So I had to do my own storyboards and really figure out how we could always keep her as a true silhouette. When she grabs Bret, I had to think about, “If he uses his flashlight like this to bang on the handle, if she grabs him when he’s up here, then the flashlight is pointed backwards creating a silhouette so that she can actually grab him.” It was really hard to figure out exactly how to get her on film.

LL: And also to show the studio that you knew all these things, that it could be done and you had ideas for them to make sure to be doing them correctly without any cheating. 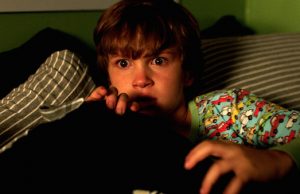 Since you played Diana in the short, did you both work with Alicia Vela-Bailey on the body language of Diana?

LL: No, there’s not really any body language in the short. It’s just me standing still.

DS: And to be honest, that was again something for the feature. I figured she would be pretty still but once I met Alicia, we met Alicia just to have her as a stunt person for whoever would play Diana. But when I met Alicia and she showed me what she could do, because she’s a dancer and she has full control over her body, it was like, “Oh, this is really awesome. So let’s have Alicia play Diana the whole time and we can really turn her into this ferocious, animalistic creature almost.”

Did you have the backstory for her in the short?

LL: … just for the short. We had no plan to make it into a feature until it went viral and Hollywood started calling us. So it was just that scene for an online competition we entered into.

DS: Even when I started writing a treatment for what the story would be, my first version had her be more of a demon really, a demonic presence. It was actually James’s idea to have her be someone who used to be a person so she could have that relationship with Sophie, that they knew each other when they were younger.

LL: That makes it even more personal and more connected to the family as well. 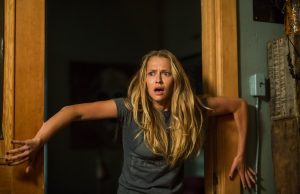 I was going to ask, what was a James Wan suggestion that he was right about?

DS: That, and also the neon light scene with the tattoo sign. The scene played out the same in my original idea but instead of a neon sign it was cars passing by outside and the headlights would sweep across the room. It was his idea to instead put a neon sign out there because then you would get the on off effect.

When we’re learning the backstory of Diana, was it yours or Eric’s idea to mix it up so it’s not all exposition? We listen to tapes, there are some 8mm style flashbacks…

DS: The first version we shot, it was actually only the tape but it felt like people would need a little bit more, that the tape was maybe not enough. So we shot the 8mm stuff which was actually something I shot myself with my old camera just to make it look like 8mm.

Was there ever more about Rebecca’s biological father?

DS: Not really. We did have a cut scene where she talks to a police officer that sort of raises the idea that makes her suspect that maybe Diana killed her father as well.

LL: I think it’s more powerful now that it’s just something that adds to the anger in the end of it.

DS: Absolutely. I wanted to have a recognizable face in the beginning where you think, “Oh, it’s going to be about this guy” or he’s going to be in it for the whole time.

Do you have to do it carefully where he’s recognizable but not too big because that would give it away.

How has it been taking on Annabelle which wasn’t your original mythology?

DS: It’s really fun actually to be in that Conjuring/Annabelle universe they created but still putting my own spin on it. Annabelle 2 is sort of its own separate thing. It’s not a straight up sequel to the first one. It’s more of a prequel which drew me to it. It’s a period piece and it’s perfect for horror. No cell phones and stuff like that.

What fun can you have in Annabelle’s world?

DS: Some of it is a bit limiting which I actually kind of like these limitations. It makes you more creative. Like in Lights Out, we have a character who can’t be in light. What can we do instead? In Annabelle you have this doll who is possessed but can’t really move. You can’t show her walking around because it would just turn silly. So you have to come up with all of these things around her or how do we do things scary without showing her move? It’s fun.

LL: And it has to still feel like it’s coming from her.

If you do two successful horror movies, are you okay with being a horror director?

Do you only want to be a horror director?

DS: I like other genres as well but horror and sci-fi, I really love science fiction. If that’s all I do, I’m happy.

What were the ones that inspired you to become filmmakers?

DS: Where horror and sci-fi meet pretty much. Alien is one of my favorite movies ever. The Thing, Terminator, a lot of those ‘80s movies. The Shining as well.

LL: I’ve done more theater acting so I’ve been into drama and comedy more than horror. He’s the one that’s kind of dragged me into the horror world. I’ve realized that horror and comedy are kind of similar. It’s instant gratification. You get a reaction from the audience straight away. If they like it, they get scared or in the comedy world they laugh. I love it now. What I would love for horror, if you go for the more thrillery aspect that I love, it’s Se7en that I really enjoy. A more recent one is Green Room. That was awesome.