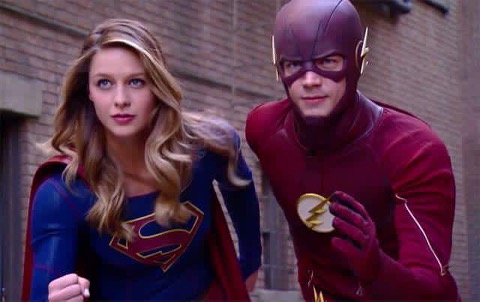 If you want to stay spoiler free, disregard the headline and skip this article completely.

Still here, well The Flash and Supergirl will have a two-part musical crossover. You heard me. Your Maid Of Might and Scarlet Speedster will be singing their way through episodes 13 and 14. The Flash will probably be using super-fast jazz hands to subdue his villain, while Supergirl will most likely tap dance her foe into submission. Both Grant Gustin and Melissa Benoist were on the TV series GLEE, so we know they have the vocal chops. And Cisco, Carlos Valdes, starred in the Broadway musical RENT. While Joe West, Jesse L. Martin, was in RENT. Usually a show has been on a while before they toss in the musical element; think ‘Buffy The Vampire Slayer’, and ‘Scrubs’. So I’m not sure how I feel about musical episodes so early on. This is only the second season of Supergirl, and the third season of the Flash. No real info has been given about the crossover musical episodes, so I guess we’ll just have to wait and see. (And here’s an interesting rumor floating around: Is Joss Whedon directing this musical crossover?)  But take note: THIS WILL NOT TAKE THE PLACE OF THE FOUR-PART CROSSOVER EVENT THAT WILL INCLUDE; SUPERGIRL, ARROW, THE FLASH, & DC LEGENDS OF TOMORROW…

Supergirl stuff: I was totally right about who is in the space pod that Supergirl found at the end of season one. It is in fact Mon-el, from the comics, played by Chris Wood. In the comics, Mon-el isn’t from Krypton, he’s a Daximite. But his powers are similar to Supergirl’s. Though his weakness is Lead, not kryptonite. And in the comics, exposure to lead can be fatal. Which sucks, because lead is a pretty common element on Earth. But who knows how much of the comic lore will be used. Though my guess is that this handsome new super guy will prove to be Jimmy Olsen’s Kryptonite. The CW loves to complicate relationships, so I’m guessing that Mon-el will shake up Kara and Jimmy’s budding romance. Supergirl will have so much more in common with Mon-el than Jimmy Olsen, and that’s bound to complicate things.

And Cat Grant will no longer be a series regular. Calista Flockhart did not make the permanent move to Canada with the rest of the production. But she will make a few guest starring appearances. And while I’ll admit that I didn’t really like Cat Grant at first. Over the course of the season she became less shrill and more insightful. And by the end of the season her relationship with both Kara and Supergirl was special. So Cat Grant’s leadership and tough-love will be missed. I just hope that, when she does appear, they’ll use her well.

Arrow Stuff: Is Laurel Lance’s Black Canary dead? Yes…but there’s death and there’s comic book death. At San Diego Comic-Con, the producers revealed that Katie Cassidy would be returning, in some capacity, to their stable of shows. So she could return as the heroic Black Canary, or the villainous Black Siren. The Black Siren is the evil Earth-2 version of Laurel Lance that appeared on the Flash. And the producers were intentionally vague on which show, or shows, she’d appear in. So keep an eye out!

Flash Stuff:  Gorilla Grodd will be back and he’s not alone.  There will be a two-part Grodd story this season, and at least part of it will take place in Gorilla City.  So look for an army of Gorillas coming at you Flash.

That’s it for now. Stay Tuned!