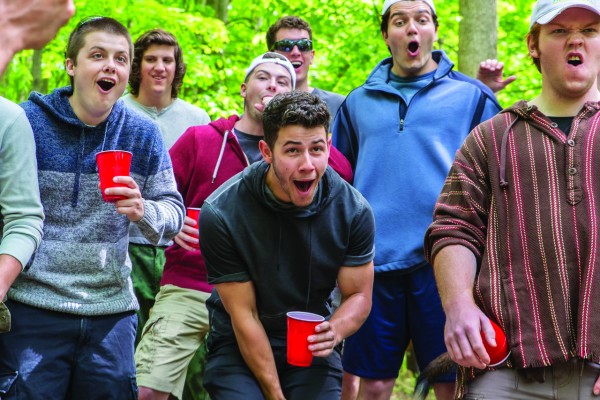 Every January I go to the Sundance Film Festival to discover the exciting new films of the year, and every summer Sundance puts on Next Fest to bring a little Sundance to Los Angeles. This year I caught up on the film Goat which I missed in January.

Brad (Ben Schnetzer) survives an attack after a high school party one night. When he makes it to college and pledges the same fraternity as his brother Brett (Nick Jonas), everyone expects Brad to fail the hazing.

Goat paints an appropriately ugly portrait of male-dominated party culture in both high school and college, pressuring guys to drink and exploiting women. It’s all so aggressive, who exactly is having fun here? Even the alphas seem stressed out struggling to top themselves and “win” some sex for the night, just so they can start all over the next night.

Perhaps the unspoken subtext is that none of these characters, not even Brad, have any direction outside of partying. There are no scenes in class and nobody’s major is ever mentioned. The cast portrays it well and you believe they are soulless college fraternity boys, or that Brett has a conscience but he’s stuck there. Only James Franco, in a cameo, gets the ridiculous male bravado and seems to be spoofing it. I actually knew some wonderful fraternity members who included me even though I didn’t end up pledging, but I understand they are not the subject of this movie. If the shoe fits…

The hazing isn’t terribly shocking insofar as the stunts to which they subject the pledges. A couple of them may be clever and the ones that are crossing the line are shown to be pushing everyone too far. What shocked me is the amount of alcohol they force pledges to consume. It looks like enough to kill a large mammal let alone a college freshman.

You get the sense that each generation has escalated the hazing a little bit further, to force the incoming class to suffer just a little bit more to earn the same spot they earned. It’s long since become too dangerous for the “brotherhood” they’re offering, and yet you can understand why it’s still appealing to young boys. Brad’s roommate Will (Danny Flaherty) would do anything for the sex that’s available in a fraternity, and nowhere else. Even Brad does it to live up to family expectations, or just to prove he’s not weak.

But seriously who the f*** were their parents naming their kids Brad and Brett? It took me 70 minutes to figure out they were different names. I wrote down Jonas was Brad, but then he called his brother Brad so I wrote that Schnetzer was Brad. But then it sounded like he was calling Jonas Brad, so which one is Brad? Check out the big brain on Brad!

Goat is a solid depiction of the hazing system with great performances from the cast portraying both ends. The film is perhaps not as surprising as it believes it is, as there is a dramatic pause after a reveal of which the audience should already be way ahead. It’s not a big mystery though so the point is the drama of what the characters endure, and Goat succeeds in that. Goat will be in theaters, On Demand and Digital HD on September 23.