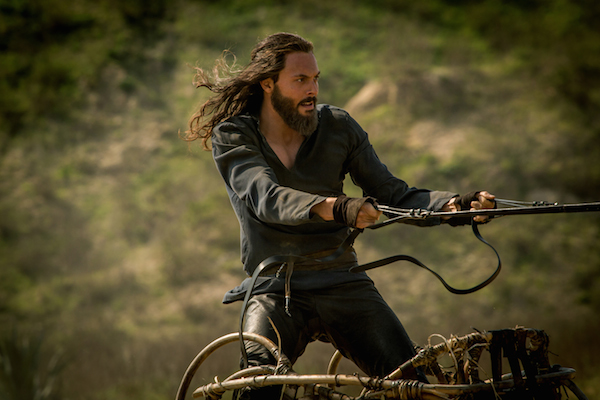 Director Timur Bekmambetov has reinvented the biblical classic Ben-Hur for a new generation. Jack Huston stars as Judah Ben-Hur, a Jewish prince who is betrayed and enslaved by his brotherly friend Messala Severus (Toby Kebbell). Judah escapes a slave ship and learns to race chariots, for a final race against Messala for his freedom.

We joined a roundtable interview with Huston to discuss his role in Ben-Hur and the film’s signature sequences. It turns out Huston was a big fan of both the novel and the 1959 epic film starring Charlton Heston. Ben-Hur opens Friday, August 19 in theaters.

The slave ship sequence is such a standout in the movie. Can you take us through shooting that scene?

Yeah, that was a lot of training. I dropped 30 pounds to do the slave ship part. It was brutal. It was crazy. Timur’s such a great director because he was always trying to make it relatable in a sense. What he took from the book, in the book which Lew Wallace wrote, the slave ship is all told from Judah’s point of view which we sort of looked at as a horror movie, because there’s nothing more horrific than all of this stuff happening around you and not being able to see anything. So you’re in this box, basically. We’re hearing sounds and things but you never know what’s going to happen. What we took very quickly was also there was about a three to six month life expectancy for a slave in the galley of a slave ship. It was pretty much just death. You basically just rowed until you died. Judah’s lasted five years so we wanted it to be a massive shock where you see that moment where Judah first goes on the slave ship and that transition where suddenly you’re five years later. We were very conscious of that and it was one of the reasons why I loved the character so much in this. I found that there were these absolute moments where I could really change myself and do character-y things which I quite enjoyed. I found this such a character pieces because when you find Judah and where he ends, the journey that guy goes on is one of the great journeys and you’re always looking for great characters. I think you’d be hard pressed to find a better one than Judah when you look at the journey he goes on. It was overwhelming. That’s sort of a pivotal moment in the movie because you see Judah just change in front of your eyes. The rather sweet, naive lover that Judah was, the prince who’s trying to keep the peace suddenly turns into a hardened slave who’s I guess driven by hatred. I think that’s always fun as an actor when you get to do that within a movie. That was very cool.

Did Timur actually crash any boats together?

The whole thing, it was amazing. That was on hydraulics and water. It was close to four hours of makeup every day. It was a lot of guys in loincloths in a very hot, stuffy, crazy place, water being whacked on you, grime being put on you. Everything was done for reals, like the oars. You actually had the weighted oars and everything. Everything we did outside of it, when I went out into sea, that was us out to sea. When I was dragged under the water, that was me saying, “Grab my leg, pull me down, take me as deep as you can do until I give you the thumbs up, and keep me there until I have to go up, until I kick you off.” That was us going through everything. We were out to see in Winter where i was just freezing. Every single stunt, we had a rigged ship that fully spun and went upside down while filling up completely with water, so when I dropped into the water and got dragged up, everything was done for real. It was unbelievable what we did. It’s great because as an actor you don’t really have to do much. You’re completely put there in your head in that wonderfully immersive experience where you can’t help but feel everything. It was shocking. It was amazing getting into that. It was what we do this for.

How long were you shooting the slave ship sequence?

God, I can’t even remember. Like a month, three and a half weeks. A long time because we had first and second unit. So whenever you thought you were done with something, you would always be coming back for more.

Were you familiar with this story before going into it?

I was really familiar with it. That was the thing. I watched that movie many times growing up. I’m actually old friends with the Heston family. Fraser Heston is coming to the premiere as one of my guests. It was very much a film that I loved and respected and Charlton Heston’s performance. I think that was probably the loveliest part about getting this script is realizing that while paying homage to the wonderful novel that was written, it was a completely re-imagined story. It was a new way of telling this and it was maybe a more relatable story for a modern day audience. It’s not three hours, 45 minutes long. It’s two hours long which is a little more digestible I’d say for a modern audience. Whereas in ’59, things were quite theatrical, operatic, the way people acted. This is a much more relatable story for the characters. Funnily enough, this is also, if it was written 130 years ago about a time 2000 years ago, yet I find that all of the themes, everything that’s going on is incredibly relevant to the world we live in today. In a sense it’s a modern tale. It’s the same sh*t we’re all going through right now. It’s horrific. There’s still political wars. There’s still religious wars. People are filled with such fear and anger and hatred. So I read this and unlike the ’59 version, which was much more of a revenge story, this was a story about forgiveness and redemption, hope and love which is very important when you’re relating it to today’s world. To show people that there’s another way. I’m not a religious person in any way. I’m a spiritual person. I believe in the goodness of humans and humanity. Just those simple acts of kindness, how far they can take you and what you can do and how hard it is to let go and forgive, but once you do, what it does to you. I was very taken with that as a story and as a character and being able to live that and actually put us through it was very important to me.

Did you shoot the chariot scene last?

The very last thing I shot was the slave stuff because I had to lose 30 pounds. So actually it worked out really well because I started the stuff when I was the young prince. We did all of that stuff first at the beginning of the movie, which was amazing. Then we did the chariot, which worked the best because the chariot’s much more a fight. Then we did the post-slave ship stuff, then we did the slave ship. It was very well done so I was slowly losing, bit by bit, more and more weight. So by the time we came to the slave ship, it was the basic weight which actually worked out because if you think about it this way, the beginning of the movie, he’s at his regular sort of young prince, enjoying everything, wine and food. Then the chariot race was the latter part of it so he would’ve put some weight on post the slave ship. Then the directly post skave ship stuff was the stuff we did after the chariot race which means you were almost the slightest you’ve ever been. And we ended with me being 156 pounds.

So tell us about shooting the chariot scene. 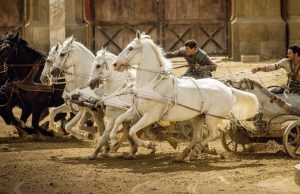 Oh, the chariot scene, it’s incredible. It’s one of those unbelievable experiences. It’s as dangerous a thing as you’ll ever do. Four horses, you realize why the power of cars is still referred to as horsepower because four horses at the end of your reigns is unlike anything you’ve ever felt before. We trained tirelessly to get to a point where when you see us on that screen with those horses, it’s me and Toby with those horses. We did everything. There was no green screen or anything like that. The only CGI effects that are used, obviously building up the arena, building up the circus and if a horse or someone was injured, something you couldn’t do. The rest of it, every single thing, that was all filmed for real. Me being dragged, me being up there, every fight that we did, you can watch the stuff actually online. They released the B-roll which you can see everything happening. It was amazing. It was one of those experience that was sort of like a meditation. Every day you go to work and you wouldn’t think about anything, all the crap that’s in your head normally. You just let it go and you just focus on the race and it was just amazing. It was quite an incredible experience.