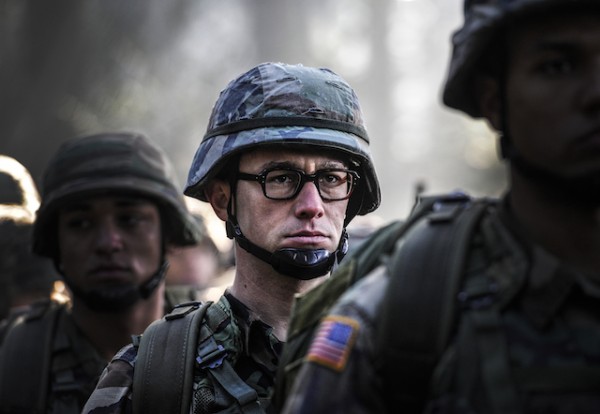 Joseph Gordon-Levitt has only played one other real life character on film. That was Robert Lincoln in Lincoln, who was gone long before we had film and audio of him to compare to his performance. Edward Snowden has been public in our lifetime, and as recently as the present.

Gordon-Levitt plays Edward Snowden in the Oliver Stone film Snowden. We spoke with him in a roundtable interview about portraying the real life Snowden and the movie’s themes of security and privacy. Snowden opens Friday.

What’s the most interesting challenge right up front when you’re playing somebody who’s not only a real person, but somebody who has a public profile? People think they know who he is. What’s the first things you need to know and understand about it, and the challenges that you have to look at?

Joseph Gordon-Levitt: Yeah, good question. Well, it’s true. When you’re playing someone that everyone knows, and everyone has seen in videos before, you have kind of an extra technical challenge that I think it would be odd if you didn’t sound anything like him or look anything like him. So when you’re playing a fictitious character, you get to make up, how does this person talk? Playing Edward Snowden, I had to talk like Edward Snowden, try. And then as far as everyone’s preconceived notions about who he is or why he did what he did, I really tried to focus less on that kind of external perspective, that external political perspective and try to just make a human being. Again, my job as an actor is to just render a character on screen that an audience can believe, that’s a real person. I understand who is he. I understand what he’s about. Whether I agree with what he’s doing or I disagree with what he’s doing, it’s a human. So that was really what I was focused on.

The pace of the way Edward talks, was it easy to apply that to any dialogue in the film, not just portions where you have verbatim footage of how he said things?

Joseph Gordon-Levitt: Yeah I mean, it took a while. Just a lot of repetition, I think. Just listening to him talk over and over again. I’d rip the audio off of the Citizenfour documentary and put it in my headphones on repeat and would just fall asleep with that stuff playing in my ears. Yeah, you listen to a voice long enough, you start to be able to kind of repeat it.

What was the process of meeting him like? Because everyone’s saying, we met him, we met him, but it doesn’t seem an easy thing to do. He’s in hiding. What’s the whole process? How do you get to go to those channels?

You’ve worked with so many iconic directors in the past, and now you’re working with Oliver Stone with this film. What was his process like in comparison to the other directors you worked with?

Joseph Gordon-Levitt: Well I mean, I think Oliver Stone is really the only filmmaker who could have really told this story. If you think about it, he’s really the only one, and I mean the only one in the realm of big Hollywood movies that are meant to entertain a big audience, he’s really the only one who’s willing to stand up and outright say, hey, I love my country, this thing that the U.S. government did goes against the principles of what America is all about, and it’s something we should look at. I don’t think there’s another filmmaker in his league that really is willing to do that in such a pointed and courageous way. So if you’re making the Edward Snowden story, I think Oliver was the only one who could really do it.

Something that comes across in the film is the script is really well balanced. It’s non-judgmental. Was that important to you when you were reading the script when you were getting involved with it?

Joseph Gordon-Levitt: The truth about Edward Snowden is, he was raised in a family that is very much pro-government. His grandfather worked for the government. His father worked for the government. His mother worked for the government. In 2004, he enlisted in the U.S. Army. He wanted to go fight in Iraq. He wanted to go put his life on the line for his belief and conviction that his country would always do the right thing. Then of course he broke his legs in basic training and wasn’t able to go fight. He was always good at computers so he ends up getting a job working for the CIA, and eventually the NSA. And he starts seeing these things that go against the principles of what he believes America to be about. And that’s a hell of an emotional journey.Ultimately, he ends up risking his life the way that he wanted to go do in 2004. In a way, he’s doing it for the same cause. He’s fighting for his country.

How did you go about portraying the love for his girl and his country and everything at odds?

Joseph Gordon-Levitt: Yeah. This movie does focus on that relationship that he has with his girlfriend, and he was in love with her, and he still is, as far as I know. In this movie, Lindsay really represents that voice of, that different kind of patriotism. If one kind of patriotism just believes everything the country does it right and never asks any question, there’s another kind of patriotism that says, I love this country and I want to make sure that I hold it accountable, that I, one of the people, we hold it accountable to be doing the right thing, to be staying consistent with the principles that the country stands for. She’s really the first one to expose him to that kind of thinking, and he does I think fall in love with her for it. Yeah, he’s in conflict because he loves her, but he can’t tell her what he’s doing for work. He can’t tell her about this thing that he’s about to go do. He can’t tell her that he’s about to go risk his life, because that would only put her in greater danger. So how do I play it? I don’t know. I mean, you just have to really try to feel those things and try to think about those things. That to me is sort of the basic approach is, you try to really feel it and hope that the camera picks it up. Rather than showing it, you try to just really, really feel it if you can. 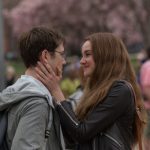