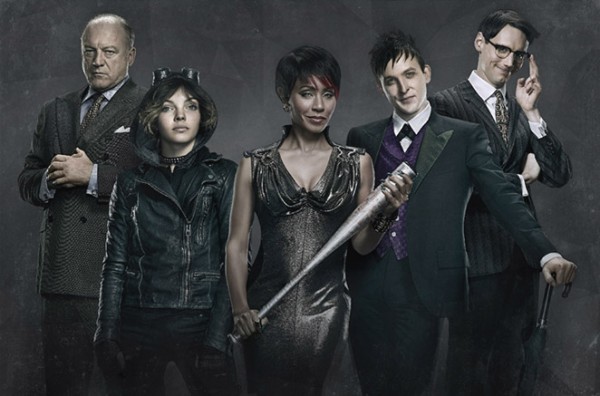 Fish Mooney is back, she has powers, and everyone is after her. The Penguin puts a One Million Dollar price tag on her head, dead or alive, mainly because he’s afraid of her. And can you blame him? Fish, never one to follow, is the leader of Hugo Strange’s enhanced misfits, and they’ve got skills. Her main man can accelerate the aging process, with just a touch, literally causing his victims to die of old age. And her other boy has leathery wings, and can presumably fly. Though we never see it. I’m thinking he’s supposed to be Man-Bat, a character from the comics who is half man and half, you know. But every time Fish, or her minions, use their newfound powers they weaken. Using their powers is killing them. That’s a bummer. And the only dude that can help them is Hugo Strange. And the police have him locked away somewhere and they’re not talking.

Enough about the bad guys for now; What’s up with our valiant heroes and anti-heroes? Well Jim Gordon leaves Gotham to find his ladylove, Lee. And being a super-cop, he locates her, no problem. But the bad news is that Lee has moved on. She’s happy drinking wine and sucking face with another fellow. So Jim goes back to Gotham and becomes a jaded Bounty Hunter. Because that’s what the broken hearted do. The Mayor put a Five Thousand Dollar bounty on each of Indian Hill Escapees, and Jim means to collect. Captain Barnes is back, and angry as ever. But he’s using a crutch and he has a bad cough, so he may not be long for this world. Harvey is a detective again, and tries to bring Jim back into the fold. But Jim’s discovered that being a badass, without any police ties, is the way to go. Lucius Fox now works for the Gotham Police Department, as kind of a scientific advisor. And Edward Nygma is still behind bars, but Oswald often visits, so at least The Riddler’s he’s got a friend.

Barbara Keane and Tabitha Galavan are a couple again, kicking poor Butch to the curb. And they opened their own club. But they refuse to pay Penguin protection money, so some other unknown gangsters come to call. But these ladies can take care of themselves. They don’t need Oswald’s help. But they aren’t quite off Penguin’s hook just yet. If you recall, from last season, Tabitha killed Penguin’s Mother. And Oswald loved his mother, maybe a little too much. So he wants to kill Tabitha real bad. BUT, he doesn’t because Butch is still in love with her. And Butch still hopes they can reconcile. Then Oswald lets Tabitha know straight up, that if Butch has a change of heart and moves on, she’s dead.

Now Fish is trying to save herself, by stealing powerful drugs, an immunosuppressant. But the drugs don’t work, so they have to go back to the source. They can’t find Hugo Strange, so they go after Miss Peabody. But where is she? With Selina’s help, Fish leaks her intent to the new reporter on the beat, Valerie (“Vicki”) Vale. And she tells Jim, who wants in on the Million Dollar bounty; Vale hopes he’ll bring her along when he goes after Fish. –Vale, a former love interest of Adult Bruce Wayne, in the comics, could become Gordon’s new squeeze. – But Jim ditches Vale and goes to see Miss Peabody, using her as bait to catch a Fish.  Now Ethel Peabody is free because she made a plea deal and agreed to testify against Hugo Strange. So she’s in a police safe house. Jim got the address from Harvey.

Jim is a super-cop, but he’s no Batman. So Ethel Peabody gets snatched. Though Jim does manage to take down Man-Bat. And Vale gets a picture of it.  But poor Ethel doesn’t know anything. Only Strange can cure Fish and her crew. So Fish has her boy use his touch to age her into extinction. Goodbye Miss Peabody, I’ll miss you. But in an interesting twist, Selina’s little friend Ivy follows Fish’s gang and gets caught. But when the age accelerator dude tries to kill her, she gets away before he can completely do his thing, falling into the bay. Which means that next time we see Ivy, she’ll emerge from the water about ten years older, and all grown up and sexy. And at some point she’ll have powers too, becoming the Poison Ivy from the comics that we all know and love. (This was the swan song for the quirky young actress playing Ivy. She’s been replaced)

And last and certainly least: Bruce goes into a Wayne Enterprise board meeting and calls out the dangerous conspirators, with no real plan in sight. So when Bruce and Alfred go home, an emissary from the League Of Owls is there waiting for them. Alfred gets beaten up again, and maybe even stabbed… AGAIN. And Bruce gets kidnapped, again. Why don’t they just kill him? Oh yeah, he has to grow up to be Batman. And lastly, young Bruce Wayne has a creepy doppelganger. (It’s the same actor wearing a bad wig.) We first saw a glimpse of him in last season’s finale. He escaped from Indian Hill with rest of Hugo Strange’s experiments. So we don’t know what he is, or what he’s up to. STAY TUNED!!!!!!!!!!

LAST WORD: “Penguins Eat Fish.”  It’s a line of dialog Ed uses to bolster Oswald’s confidence.  * Glad to be back y’all! – Walter out!*