Hacksaw Ridge is the most violent movie you will ever see about a pacifist. Actually I guess that’s not true because The Passion of the Christ is technically about a pacifist too. As a director, and even as an actor, Mel Gibson is drawn to violent stories and doesn’t shy away from depicting them graphically. This may be the time it’s gone so overboard it’s at odds with the theme of the film. 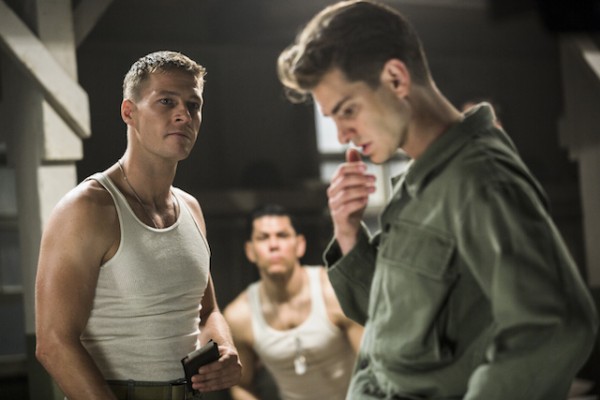 Desmond Doss (Andrew Garfield) enlists in the army for WWII to be a medic, but refuses to carry a rifle. He wants to serve as a conscientious objector while being able to save lives in the field. History tells us he did save more than 75 soldiers, but he was fighting uphill just to be allowed to serve.

Doss is a true hero who deserves a movie about his story. The film he got is a bit problematic. The first hour of the movie is focused on the Army trying to kick Doss out. This is an important part of the story, because Doss is presenting a difficult perspective. Sure, he can serve as a medic without going through rifle training, but they can get any other medic who also shoots. 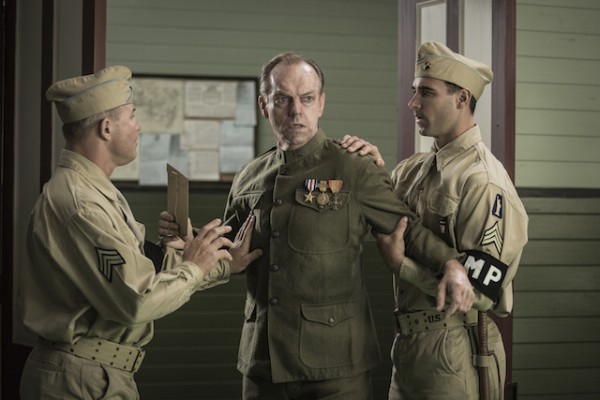 It’s admirable how Doss maintains his convictions in the face of abuse, and it’s interesting how he ultimately succeeds, but the script is distractingly heavy handed. It feels like the screenwriters researched some dramatic incidents that felt like great movie scenes (particularly when Doss’s father steps in), but played them so on the nose that they felt fictional. Little touches, like when a WWI veteran shows up and a superior comments on his “Great War uniform,” are trying to capture the innocence of a military that hadn’t quite admitted they were in another World War, but it just plays like a bit of historical research crammed into a scene.

The war scenes feel less concerned with depicting the brutal realities of war and more interested in topping the other famous war movies. How do we top the opening of Saving Private Ryan? How do we top the headshot in Glory? How about guts strewn on the battlefield, or a human shield. It’s a bit too self-conscious.

I get it. Gibson wants to show the unfathomable violence a conscientious objector still has to face, but it’s so blatant it feels more like a parody of his own other graphically violent movies. There’s an actual Evil Dead moment in a battle scene, followed by heads literally exploding. A film should pull no punches in depicting violence, but when you imagine the filmmakers trying to come up with things to shock you, it becomes a joke. 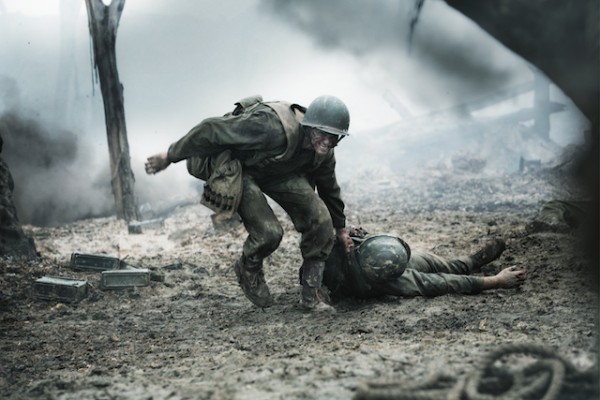 Despite my intellectual misgivings, I must admit the battle scenes are viscerally thrilling. The siege on a Japanese gatling gun bunker is intense, even though it fetishizes the violence.

It all pays off in the finale when Doss goes back for wounded men, with armed Japanese soldiers still attacking. The way Doss evades the Japanese while still not shooting back is what Hacksaw Ridge is all about. Then there is another battle scene after that for more violence.

The script also tries admirably to make the soldiers stand out but fails to. They are introduced individually during basic training, and each one given a “thing” about them. Sergeant Howell (Vince Vaughn) gives them each nicknames too but the nicknames never really pay off because they’ve each only done one thing before we see them in battle. Ghoul (Goran D. Kleut) is the only name that’s repeated enough so that when he does something in battle you remember who he is.

You’ll recognize the superiors for sure, Howell because he’s Vince Vaughn and Capt. Glover (Sam Worthington). Smitty (Luke Bracey) is an actual supporting character who has a full arc and lots of dialogue scenes with Doss. The rest literally become cannon fodder, even when their bodies are identified by the nicknames they were given earlier.

There is a way to overlook some of the oversimplifications and overindulgences to appreciate the story of a unique war hero. I think the Desmond Doss story could have been a definitive war movie classic, but now he’s actually a vehicle for gratuitous depictions of violence.