There’s nothing Robert De Niro can’t do. If a role requires a new skill, he will immerse himself in that craft and become excellent at it. The Comedian cast De Niro as a standup comic and it is totally worth it to see De Niro do standup comedy. The plot providing the vehicle for the stand-up comedy is thin, but there’s enough stand-up comedy that I’m glad The Comedian exists.

Jackie Burke (De Niro) goes to jail for assaulting a heckler, but the viral video of the incident gives him what they call in the business “heat.” While serving community service he meets Harmony (Leslie Mann) who is a typically Hollywood decades-younger love interest. He asks his brother (Danny DeVito) for a loan and goes to meetings to beg condescending millennials for work.

De Niro is a really good standup. Some of the material may be a little pedestrian but the thrill of seeing De Niro nail the delivery makes up for it. Jackie is an abrasive shock comic but doesn’t allow that to be a crutch. He also self-deprecates, and he can read the room. If one insult doesn’t play, he doesn’t harp on it. He knows the line and he moves on. He’s willing to push buttons, but only as far as the audience is having a good time.

It’s not just the sequences in comedy clubs. Jackie entertains the homeless people at a soup kitchen where he’s doing community service. He gives a toast at his niece’s wedding. He’ll even go one on one with Harmony’s father (Harvey Keitel) in a great scene that plays on the De Niro/Keitel history. They’ve faced off before, but this time it’s over Keitel’s daughter, which is still a Hollywood double standard but sort of seems like the warped Hollywood evolution of their Taxi Driver battle for Iris.

I do contest that this movie understands what would make a video go viral. It’s a lazy movie cliche when a viral video saves the day to make the plot move forward. It’s also hard to take the moral high ground when the film has such outdated ideas of what reality TV is. There’s plenty wrong with cable television, but Fear Factor has been off for 10 years (save for a season they apparently did in 2011) and that’s the model for the sleazy reality TV show in which Jackie finds himself.

They should have anticipated the nostalgia boom coming. Jackie starred on a hit ‘80s sitcom “Eddie’s Home” which everybody still wants him to do. If this were really happening, they’d probably be pitching an “Eddie’s Home” Netflix series. 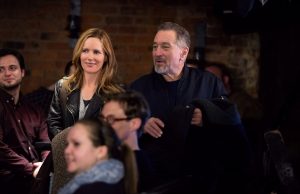 Mann is great and completely holds her own with De Niro. I just wish Harmony had been more than a reflection of Jackie, and the “things” they give her to try to prove she’s an independent character feel like ideas male writers have about women. She’s got an ex, she’s struggling with her career, has an overbearing father, all things Jackie can try to fix.

But each of these generic plot elements leads to a scene where Jackie falls back on standup comedy, so there’s plenty of standup. It’s not a gimmick where he just learned one routine to do in the beginning of the movie. He does it throughout. As much as I’d rather just see 90 minutes of De Niro’s standup outtakes, there’s enough of it in The Comedian that I enjoyed the vehicle.