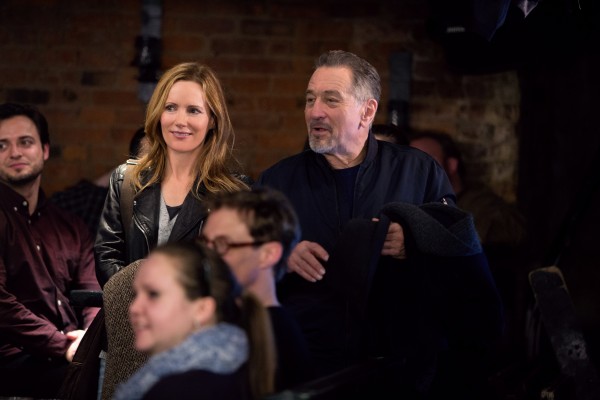 The Comedian had it’s premiere at AFI Fest in Hollywood. I reviewed the film, after sitting in the audience with Robert De Niro, director Taylor Hackford, and stars of the film including Leslie Mann and Danny DeVito.

After the film, De Niro joined Hackford and his costars for a Q&A about playing a stand-up comedian in the film. When the audience got a chance to ask questions, I stood up so I could talk to Robert De Niro. I asked him: 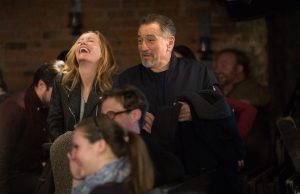 “Did you find that the act of standing on stage alone doing standup had a very different rhythm than the sort of performance you’re used to doing on film in dialogue with other actors?”

De Niro seemed very engaged to talk about a different kind of performance, so he answered me at length:

“Yeah, you need the interaction with the audience,” De Niro said. “When I was rehearsing a lot with Jessica Kirson and Lewis Friedman. We would do it without an audience and then sometimes some people would come in from The Comedy Cellar that were staff and so on. Taylor and some of the crew members would come in. Then with, I don’t want to call them real people, whatever. Even then, I got the reaction. You need that. You need some kind of response. The comic needs it just to feel good, things are working. Nothing can happen and you’re going to have to just deal with it. That’s called dying, I guess. Anyway, I worked my way through it all is what I’m saying and it was a very, very interesting and good experience. Not an easy one. I hope that answers your question.”

In The Comedian, De Niro plays fictional standup comic Jackie Burke, who once had a hit ‘80s sitcom, “Eddie’s Home.” These days, he’s struggling to get club gigs and everyone just wants him to do Eddie’s catch phrases again. The film shows Burke perform many times on stage, and other times to private audiences, so you have many opportunities to see De Niro do standup.

The Comedian opens December 21 in limited release and nationwide January 13, 2017. 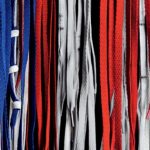