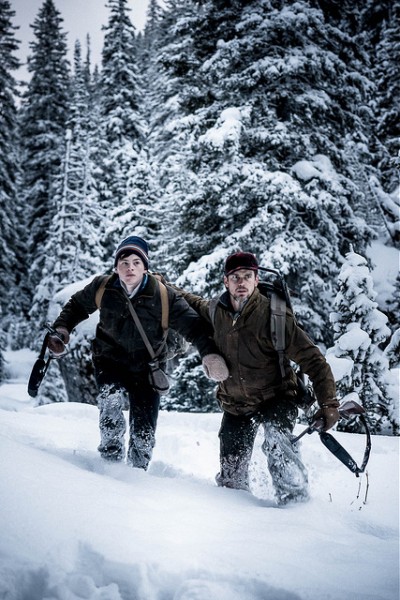 Up front, a movie about a father making a man out of his son by teaching him to hunt in the woods was probably never going to fully touch my soul. A walkabout, vision quest or coming of age tale works for me but I so don’t relate to outdoorsmen. Bravo to them though and certainly seeing Matt Bomer get rugged is a captivating change of pace.

David (Josh Wiggins) visits his father Cal (Bomer) for this family tradition, as flashbacks reveal Cal’s father (Bill Pullman) teaching Cal the same lessons, like tracking moose and gutting your kills. Then disaster strikes and David has to rescue Cal and get them both to safety.

Survival is more of a compelling adventure to me than hunting animals for sport or education. They do eat the animals so it’s not a waste, and I understand the values of learning basic skills that modern society takes out of your hands. But for me, I watch the first half of Walking Out as an observer. The second half I’m more invested in hoping this kid and his dad don’t die over this abstract concept of learning primitive skills.

David’s skills actually become more valuable than Cal’s at this point. That’s rewarding to show that society gave him some valuable strengths. Certainly the notion of David carrying his father is meaningful.

The scenery is beautiful. Filmmakers Alex and Andrew J Smith really captured the beauty and deadliness of the wilderness. Bomer and Wiggins give heartfelt, emotional performances so Walking Out is recommendable for fans of the actors or the genre of wilderness survival.