Last year, the Sundance Film Festival premiered Goat, a sobering tale of fraternity hazing. There is surely more than one story of hazing and pledging, and Burning Sands tells another one from a unique perspective, and a bit more subtlety than Goat. 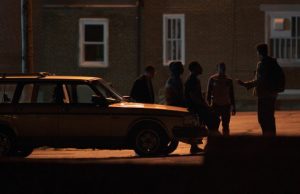 Zurich (Trevor Jackson) is pledging Lambda Lambda Pi with four others (five before one quit). Over the course of Hell Week, they jump at the beck and call of the Lambda brothers, enduring physical beatings and sexual temptations, neglecting his schoolwork and girlfriend.

At first I thought the day of boot camp workouts in the woods was fairy mild hazing. It’s tough but at least it’s exercise. Pretty soon the brothers are punching and kicking the pledges and there’s just no need for that, although I bet drill sergeants in basic training do it too. I always thought it made the leadership seem weak if they needed to be the inflicted of punishment to feel someone was loyal to them. Real loyalty isn’t contrived like that.

But it’s also clear what the appeal for Zurich and the pledges are. Zurich wants to achieve what his father didn’t. Square (DeRon Horton) just want to get laid in college which is totally healthy. We also gather the lingo like pledges are called mutts to further demean them. 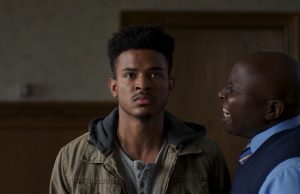 What’s most insidious about Burning Sands is how smart the Lambdas are. This is a post hazing world where they know how not to get caught. No serious beatings, just gradual ones but those add up to potentially major health problems. This is also set a Frederick Douglas University, drawing parallels between slave driving tactics and a black fraternity using those very tactics to control their own.

While some of the story beats may be familiar, particularly the tests Zurich fails in his relationships and the false hope he has in certain allies, you can feel Burning Sands is a heartfelt story. Writer/director Gerard McMurray has compassion for these kids and a passion for shining light on these abuses. He’s definitely one to watch.

The cast shines too. These are breakthrough roles for Jackson and Horton. The women come off well too. Toya (Nafessa Williams) is playing her role as sexpot to help young men come of age but not demeaning themselves or others. Rochon (Imani Hakim) is so lovely I can’t believe Zurich would risk losing her, but she’s right to set boundaries. Angel (Serayah) gets to show her intelligence in the classroom.

I hope Netflix’s strategy of premiering movies at Sundance works. They deserve the attention this forum brings and it’s good to see the Netflix bumper on the big screen.