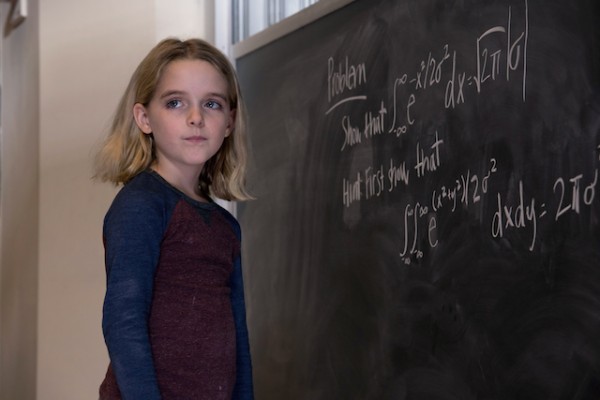 Intelligence has gotten a bad rap these days. People who knew more than others have been branded “elitist” or “smug.” And just to show them that they can’t tell us what to do, we’ve purposely defied their evidence-backed warnings. So a movie like Gifted that glorifies being smart and makes smart people relatable seems like a good thing to me. 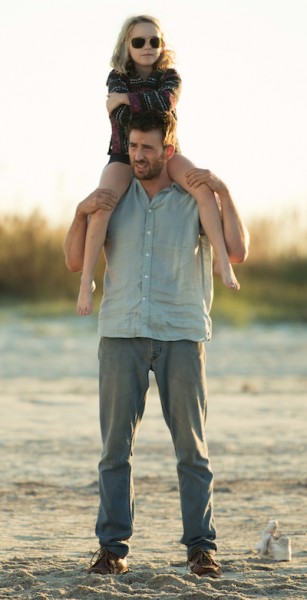 Frank Adler (Chris Evans) sends his niece Mary (McKenna Grace) to first grade for the first time after home schooling. She’s way too smart for it but he wants her to have a normal childhood. Getting selected for a gifted school only draws more attention. Mary’s grandmother Evelyn (Lindsay Duncan) returns to start up the old custody battle again. Frank took Mary after his sister Diane committed suicide.

I really like the theme of Gifted. Frank’s idea is that separating extraordinary people makes them secluded and withdrawn, as happened to Diane. It’s not that you don’t celebrate the extraordinary, but let them interact with people because they’re still going to have to live in a world of people who are not like them. Really, that’s a microcosm for everybody, because everyone is different in some way. Focusing on making intelligence less scary could go a long way towards showing you can be both smart and compassionate. 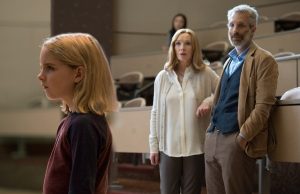 Mary is pretty extraordinary regardless of her intelligence. Standing up to a bully, not on her own behalf but on behalf of another kid, raises the old “damned if you do/damned if you don’t” dilemma. Of course it’s wonderful to defend the oppressed, but then she’s branded as violent. The best part of this is that Mary continues to defend the bullied child after the incident. That’s the truly valuable message. Defending the helpless doesn’t end at hitting the bully. The important part is that you build the victim up continually.

The custody battle is compelling, with the constant undercurrent of how could you put a child through this? Evelyn wants to send Mary through the same rigors that drove Diane to suicide, but it’s not hard to imagine the courts siding with money. It’s frustrating to see a smart woman double down on destructive behavior, but it’s realistic that she’d deny her involvement in her daughter’s troubles. 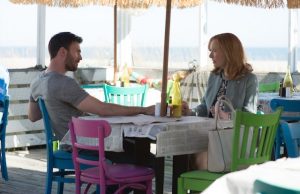 Dealing with difficult adults is what drama is all about. Frank has a good way of talking to authorities and the educated with conviction, if not hard evidence. Frank and Evelyn remain civil in private throughout the hearings. That’s what makes it hardest. You could just be a family! Stop all this nonsense!

Gifted can’t teach us the kind of math that Mary is capable of doing, but it does convey the complexity and importance of the formulae Mary is solving. It makes empirical knowledge like math worthwhile and important. I appreciate putting that into the world.

Mary’s teacher Bonnie (Jenny Slate) is really only there to be the girl for Frank. I suppose someone has to discover Mary’s genius and you might as well let her stay for the whole movie. This wasn’t going to be the “Frank and Mary have a complicated relationship” movie, and I’m sure Slate was happy to empower a young actor like Grace in a smart vehicle. 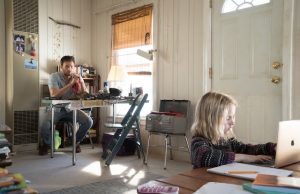 My biggest beef is the handheld cinematography. There may be other cliches in the movie but this is the most egregious: Jerky camera = raw tension and spontaneity, except it’s all calculated. It really just looks sloppy that a studio film can’t get a cinematographer who can hold a camera still. Cameras are really small now too. One scene in a bar is locked off and it actually looks like a real movie! We’re not talking Greengrass level jitters but it’s enough to stand out that it’s not natural movement. It’s intentional and lazy.

There’s no denying Gifted follows the formula. Uplifting, precocious, heartstring pulling, upsetting, relief. I like the way it respects adults for making thoughtful decisions, even the cunning ones, and the themes it hangs on that structure.